If you see a black fly or its eggs and larvae while you're turning over your compost pile, don't be alarmed.

It's probably a "good soldier."

The black soldier fly (Hermetia illucens) is a beneficial insect. And a far-ranging one at that.

Martin Hauser, senior insect biosytemastist at the Plant Pest Diagnostics Branch,  California Department of Food and Agriculture, says this is the only Hermetia he can find in the Sacramento region. "If you go south and to Arizona and New Mexico, you'll find more species, which are more colorful."

This New World species, he says, is now worldwide. "I found it in Nepal, Borneo, Australia, Madagascar, Ghana, France and last year it was recorded for the first time in Germany."

The black soldier fly, about 15 to 20 mm long, is primarily black, as its name indicates.  The male has often a reddish abdomen while the female's abdomen is mainly black with dark black wings.

It's often mistaken for a wasp. "Hermetia illucens has that transparent white window on the first abdominal segments, which gives the optical illusion of a  [not only Sphecids, but also Eumenidae etc..] wasp with a petiolated abdomen," said Hauser, who received his doctorate in entomology from the University of Illinois at Urbana-Champaign.

The adults feed on floral nectar; in fact, we spotted one on sedum last week at the Häagen-Dazs Honey Bee Haven on Bee Biology Road, UC Davis. The females lay their eggs in compost, manure and the like. And they do like!

The eggs, pale yellow or cream colored, are in masses that contain as many as 500 eggs. Some folks, when they see them in a compost pile, wonder if they're cockroach eggs.

The larvae, aka maggots, thrive on decaying organic matter or detritus. In doing so, they make short work of rotting organic waste. They're also used as a forensic entomology tool and as pet food.

Indeed, if you've never encountered a black soldier fly, you may have encountered the larvae. They're sold in pet stores under such names as Phoenix Worms, Reptiworms and Soldier Grubs to feed herptiles (amphibians and reptiles) and tropical species of fish. They're also used as composting grubs and for chicken feed.

Here’s a great video on the black soldier fly larvae.

When used in manure management, the black soldier fly larvae are known by the  acronym, BSFL.

"The larvae of this fly eat everything!" Hauser said. "They can get rid of all kinds of organic waste in no time, like mountains of orange peel from the juice industry, organic part of household garbage, and compost."

A video on YouTube shows how quickly these larvae consume dead fish.

"But the real cool thing is that you then can harvest the maggots, which are a prime source of protein," Hauser said. "...You can collect the mature maggots, and produce, for example, protein powder for the fish industry. Right now we catch a lot of small fish, grind them up and feed them to larger fish, which is a huge waste of resources, energy and protein--each trophic step loses 90 percent of the energy, which means you have to catch a lot of small fish to raise some big fish."

"But if you could feed the fish with orange peel and garbage, you would solve two problems at once - and this is where this amazing fly comes into play: it converts waste into protein. Saving the fish, getting rid of waste and being 100% organic."

So, if you think of insects as "the good, the bad and the bugly," think of the black soldier fly as "good."

The larvae are good for the compost pile, good for pet food,  good for manure management and good for biogradable waste.

And as an adult, it's a pollinator! 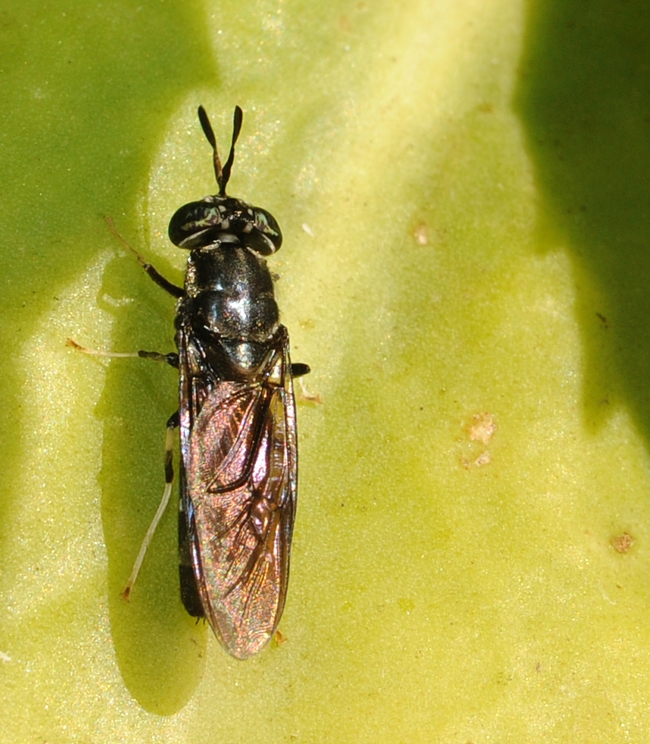 The black soldier fly is a beneficial insect. (Photo by Kathy Keatley Garvey)

Black soldier fly heading toward a compost pile. (Photo by Kathy Keatley Garvey)
Tags: black soldier fly (1), California Department of Food and Agriculture (1), Hermetia illucens (1), Martin Hauser (1)
Comments: 2
Comments:
by Angel Chaney
on October 4, 2011 at 6:16 AM
Why not use black fly maggot tea in your vegetable garden? I cannot find any reliable information on this subject. Can someone point me in the right direction, please.
by Sajan
on February 18, 2020 at 12:06 AM
Is it a confirmed fact that BSF is found in Nepal?
Leave a Reply: