Integrated approach can reduce the risk of Fusarium wilt in lettuce

In a comprehensive study published in the January-March 2012 issue of the University of California’s California Agriculture journal, researchers evaluated the myriad factors that contribute to crop damage from Fusarium wilt, and conclude that an integrated management approach is most effective.

Lettuce is the fifth most valuable agricultural commodity in California, with a farm-gate value of over $1.7 billion in 2009.

Fusarium wilt affects all major lettuce production areas in California and Arizona. Caused by a soilborne fungus, it was discovered in California in 1990, when plants with symptoms that ranged from mild stunting to complete collapse were observed in fields near Huron, in the San Joaquin Valley. Diseased plants have severely rotted taproots.

Crop rotation. While soil fumigation can eradicate the Fusarium fungus, the authors note that reintroduction remains a significant risk and routine preplant fumigation is generally not an option for lettuce because of costs and regulatory restrictions. “Consequently, growers must rely on the attrition of inoculum that occurs naturally when nonsusceptible crops are grown instead of lettuce.”

To estimate the longevity of pathogen propagules, the researchers transported soil from a naturally infested commercial lettuce field in Arizona to establish microplots at the University of Arizona's Yuma Agricultural Center. After 6 and 12 months, the density of the Fusarium fungus had declined by 71 percent and 86 percent, respectively. After 34 months, the fungus was detectable at 0.5 percent of the starting population.

“These results imply that keeping a field free of a susceptible crop for a year should dramatically reduce the density of pathogen inoculum — provided there is no significant reproduction on weeds or a rotation crop — but that the pathogen will likely persist at a low level for at least several years,” Gordon and co-authors wrote in California Agriculture journal.

Field susceptibility. To assess the progression of Fusarium wilt under field conditions, the researchers established an infested plot on the Department of Plant Pathology’s research farm at UC Davis.

By six weeks after planting, differences among the crisphead lettuce cultivars had largely disappeared. Although Salinas and Grand Max were more resistant to Fusarium wilt than other crisphead lettuce cultivars, their level of resistance appeared insufficient to prevent severe damage. On the other hand, leaf and romaine cultivars retained low severity ratings until the end of the season.

Air temperature. Air temperatures also played an important role in disease development. In the field trials at UC Davis, Fusarium wilt developed more rapidly in the first (June) trial than in the second (July) and third (August) trials. Air temperatures were highest during the June planting, with a mean daily high/low of 99°F/59°F. They were progressively lower during trials in July, 95°F/55°F, and August, 90°F/52°F. Additional temperature tests in controlled environment chamber confirmed a significant effect of temperature on the development of Fusarium wilt, with disease being most severe at the highest temperatures.

Genetic research. The research team has identified additional resistant romaine and red leaf cultivars and begun developing populations to determine the genetic basis of their resistance. Likewise, breeding is under way to transfer the resistance genes from highly resistant crisphead cultivars to less resistant types. 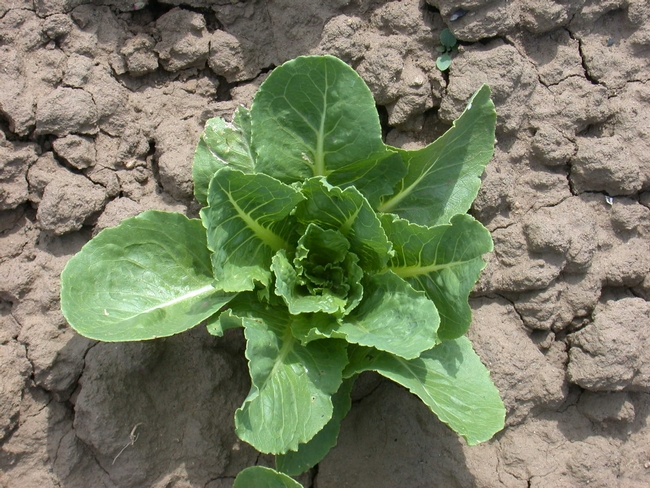