Derek Downey working in the Davis Bee Sanctuary. (Photo by Kathy Keatley Garvey)
"The rain in Spain falls mainly in the plains,” according to a signature song in the musical, My Fair Lady.

Don’t tell that to Derek Downey, who has been trying to schedule the grand opening of the Davis Bee Sanctuary now for the past two weeks.

It appears that rain is falling mainly on the Davis Bee Sanctuary.

A grand opening initially set March 21 and then changed to March 31 has now been re-scheduled for Sunday, April 1.

“It’s supposed to rain hard on Saturday, March 31, and be nice on Sunday, April 1,” said  Downey, who heads the Davis Bee Collective and its newly landscaped site, the Davis Bee Sanctuary.

The Davis Bee Collective, a community of small-scale beekeepers founded by a former UC Davis entomology graduate student Eli Sarnat, will host the grand opening of the sanctuary from 1 to 5 p.m., Sunday, April 1 on Orchard Park Drive, near The Domes student housing. The public is invited.

The open house will be an opportunity for area residents and prospective members to “come meet the beekeepers," Downey said. The event will include tours, honey tasting, a permaculture lesson covering hugelkultur (the drought-tolerant technique being used at the sanctuary), a free flower giveaway, seed exchange (bring seeds), and a presentation on native bees, which also will be sharing the sanctuary.

A special guest speaker will be Extension apiculturist Eric Mussen of the UC Davis Department of Entomology. Also planned: a display of native bee condos from Robbin Thorp, emeritus professor of entomology at UC Davis.

As of March 29, six hives now occupy the Bee Sanctuary. "We have four empty hives and space for a total of 12," Downey said. The hives are decorated with such names as "Just Bee," "Bee Happy," "Birdhouse" and "the Whaler Superorganism."

"The bee sanctuary is also place for people to meditate, smell the flowers, watch the bees and hummingbirds in the trees, and learn about permaculture---we're using a drought-tolerant method of gardening called hugelkultur ("hoogle culture") which involves burying logs of different sizes under the soil," Downey said. "The wood breaks down and becomes a sponge able to hold on to a ton of water so that in summer months you don't need to irrigate very much, if at all!"

Downey invites interested persons to join the Bee Collective and Bee Sanctuary; information on how to join is on the Davis Wiki website at http://daviswiki.org/Davis_Bee_Collective. He moderates the Google group and adds new members. "If someone wants to just help out and learn about bees, they are always welcome to take part," he said. "We will have hives that are collectively managed so everyone can learn together. If someone wants to keep their own hive there, it is first-come, first served. We have space for 10 to 12 hives, max."

Members of the Bee Collective share resources, such as beekeeping equipment, books, and tools. Downey accepts donations for the Bee Collective and Bee Sanctuary (contact him at davisbeecharmers@gmail.com or (310) 694-2405). He recently received dozens of donated perennials.

Bee Sanctuary work parties are held every Sunday from 1 to 4 p.m. at the site.

Downey anticipates filling the other empty hives in the sanctuary via swarms he collects in Davis, Dixon, Sacramento, Woodland, and Winters.

Mmeanwhile, the Davis Bee Charmer is hoping the third time is the charm--for the weather to relent, that is. 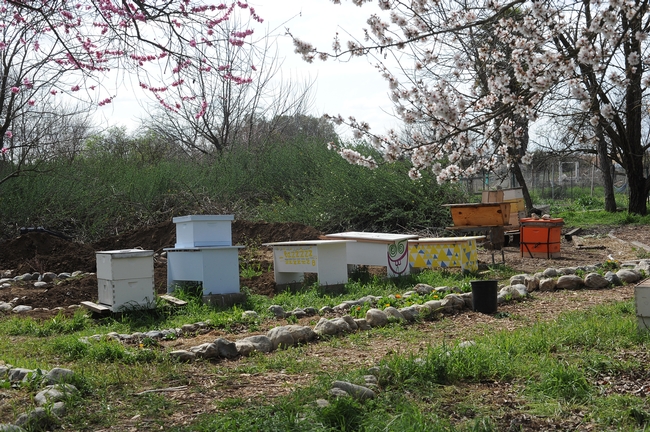 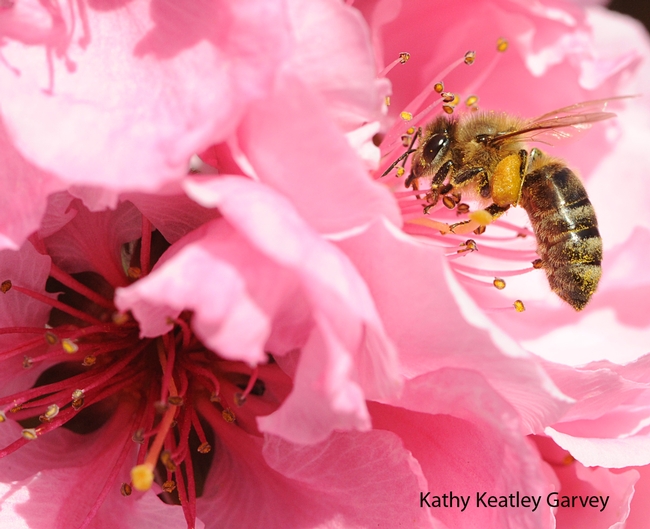 If the weather cooperates, visitors to the Davis Bee Sanctuary can see foragers on the nearby blossoms. This one is on a nectarine blossom. (Photo by Kathy Keatley Garvey)
Tags: Davis Bee Collective (3), Davis Bee Sanctuary (3), Derek Downey (4), Eli Sarnat (3), Eric Mussen (248), Robbin Thorp (263)
Comments: 0
No Comments Posted.
Leave a Reply: