It's like going back to nature, but it's always been there.

Honey bee expert Norman Gary, emeritus professor in the Department of Entomology at UC Davis, says that honey is at its best "when it is sealed in the comb."

"It's packaged in the original, natural container that preserves its flavor and goodness until consumed," he said. "Some of these qualities are compromised during the harvesting process."

In his book, Honey Bee Hobbyist, the Care and Keeping of Bees, Gary writes that, "When honey is extracted, it flies through the air in tiny droplets and spreads thinly on the interior walls of the extractor tank. This exposure to air causes some flavor loss. You can enjoy the full flavor of honey be eating bite-size pieces of freshly constructed honeycomb. You can also chew beeswax like chewing gum. Swallowing beeswax is an option, but it doesn't benefit you in any way because it is indigestible."

Gary, who has been keeping bees for more than six decades, offers these tips to beekeepers in his book: "Here is a simple way to produce a small amount of comb honey. Remove a comb frame from a honey super. Replace it with a frame with the comb removed except for a 1-inch strip at the top to encourage bees to build new comb in the frame. At the beginning of an expected honey flow, place the frame in the center of the honey super immediately above the queen excluder. Bees will fill in the frame with new comb."

The honey bee, first brought to what is now the United States (Jamestown, Virginia) in 1622 and then transported to California in 1853, has long been revered for its pollination services and the products it produces. Early Americans prided themselves on finding feral honey bee colonies in bee trees and raiding the honey.

Truly, comb honey is one of nature's treasures. Many beekeepers and honey enthusiasts just cut the comb into small squares and eat it immediately. What to do if it's not consumed right away?

Gary says to seal the comb honey into zip-locked plastic bags and freeze it. It will, he says, "keep indefinitely" in the freezer. 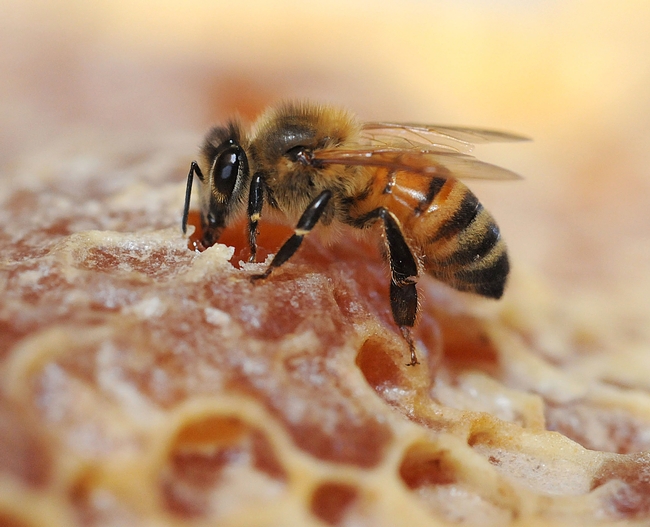 Honey bee on comb. (Photo by Kathy Keatley Garvey)
Tags: beekeepers (2), comb honey (1), Norm Gary (1)
Comments: 2
Comments:
by David Max Curtis
on January 4, 2013 at 6:17 AM
Hello
I'm trying to contact Kathy Garvey in regards to her picture Honey bee on comb. I'm seeking permission to use the picture,
and crediting her for it. My webmaster has employed it in my ebook. http://www.echoeshub.com/wbi/Pages/index.html The book has yet to be offered for sale until all the picture authors have given their ok or requirements to use them.
More on me found at Wild Bee International.com
thank you
by Gayle
on March 3, 2013 at 11:18 AM
looking for local honey to buy from local bee keepers... i really miss fresh honey. as a small girl we had a friend that had bees and he would bring us fresh honey w/some honey comb.. would like to find this again.
Leave a Reply: