Sacramento Valley red fox. (Photo: Ben Sacks)
The red fox (Vulpes vulpes) is one of the most widely distributed terrestrial mammals in the world. California is home to red foxes of both native and non-native ancestry. Red foxes in the Sacramento Valley were long thought to be non-native. However, in 2005 genetic analyses performed in the UC Davis School of Veterinary Medicine’s, Veterinary Genetics Laboratory revealed these foxes to be native to the region and potentially in decline.

The estimated population size of Sacramento Valley (SV) red foxes is very small, indicating possible conservation concerns. In addition, SV red foxes occur in a highly modified landscape used for intensive agriculture. In particular, while preliminary analyses indicate that the current distribution of SV red foxes in the northern part of the Central Valley overlaps a floodplain once characterized by native grasslands and riparian forests, these habitats have been heavily modified to meet agricultural needs. The continuous modification of habitats for agriculture in the SV may be impeding on the limited habitats available to foxes, particularly since these foxes only live at low elevations.

Based on their unique natural history and their close proximity and dependency on human modified landscapes, SV red foxes face multiple threats. Direct threats include deaths attributed to a variety of causes: residents protecting their poultry, vehicle collisions, exposure to pathogens from domestic animals, and ingestion of poison bait meant for rodent control or eating rodents killed by poison. Additional threats for the viability of SV red foxes are the species’ limited range and distribution. Species isolated in a single region with a small population, like the SV red fox, experience minimal genetic variation in their gene flow, and could potentially face genetic introgression from adjacent non-native populations. These threats, which are likely increasing over time, may warrant placing the SV red fox on the threatened species list in the near future.

In 2007, an online reporting system was launched by the University of California, Davis, with goals of involving the public in documenting any potential fox sightings. The goal of this website was to involve the local community with locating SV red foxes so that samples could be obtained for genetic testing and surveillance could be set up for behavior monitoring.

Now, master's student Amy Brasch of Victoria University of Wellington is assessing how effective public input was on locating the foxes and how the website can be improved for future conservation efforts.

The results of this survey will enhance the website as well as develop a better understanding of how effective public input is on locating Sacramento Valley red foxes. 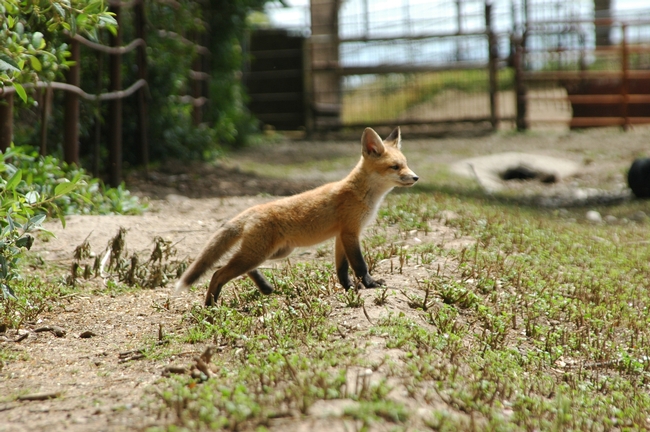 Sacramento Valley fox pup. (Photo: Mark Statham)
Tags: Citizen Science (6), Red Fox (1), Sacramento Valley (1), UC Davis (24)
Comments: 15
Comments:
by Rachael Long
on October 19, 2012 at 3:41 PM
Nice article. Thank you for updating us on the status of the Sacramento Valley red fox and for the opportunity to participate in a survey to help conserve it.
by scott rutledge
on January 29, 2015 at 11:15 AM
over the last 2 years I have have watched a red fox pair start a family at a golf course I frequent in Stockton, ca I was wondering exactly which kind of red fox because somebody obviously must have put them there, they look exactly like the ones on the endangered list, have pics 209-603-6783
by Jeannette E. Warnert
on January 29, 2015 at 11:19 AM
Scott: You can report a sighting on this website: http://foxsurvey.ucdavis.edu/FoxSurvey/DataEntry.action
by Bb Robertson
on November 19, 2015 at 4:28 PM
1:45pm 11/19/15 I saw a red Fox at the Santa Barbara Airport grounds. It ran from the AOA area, then under a fence lost track at the creek next to Fairview Ave. Have a pic but not clear at all, old cell phone.
by Bruce Meade
on March 3, 2016 at 4:29 PM
Observed first fox today. Beautiful animal. When it runs, it seems to hop.
I live in Central Valley Ca. Springville. Foothills to Sierras and Sequoia National Park.
Fox ran along fence line and disappeared into orange grove.
by Chris Beebe
on June 26, 2018 at 6:28 PM
I spotted a red fox this morning in my yard in Solvang, CA. Good sighting; full sunlight, and I confirmed the species using many online sites. We have many quail families in the area, so the fox may have been attracted to them.
by Jack Booth
on August 21, 2018 at 8:30 PM
We have had red foxes on our since before we purchased it in 1998. I have seen 4 in the last 5 days, including 2 yesterday (female and grown pup) photos of the adult female. Today I got good photos of one of the two pups I saw. I mean really good photos. If you are interested in looking at them I could email them. I am a retired wildlife biologist from CDF&W. I'm just North of Ukiah, Mendocino County
by Jeannette E. Warnert
on August 22, 2018 at 8:27 AM
Jack: Please report your sighting on this website: http://foxsurvey.ucdavis.edu/FoxSurvey/DataEntry.action
by M. Sanders
on October 9, 2019 at 3:03 AM
Today around 4:00 pm I saw a red fox run across our front lawn. She appeared to have a foot injury on her hind right leg, holding that foot up as she ran. She stood up and got a drink from our birdbath. It looks like she had done that before but it was the first time I have seen a red fox since living in this sea for 3 years. She sat under The oak trees briefly after drinking. She was very alert and scanning all directions. She then looked for some water from irrigation tubes and then went into a forested area. We live in an agricultural area in Santa Barbara next to a creek, ocean, and open space.
by Claudette Mitchel
on March 27, 2021 at 10:41 PM
I have been reporting spring sittings & night calling / territorial screams of the SV Red Foxfor the last several years to UCDavis Ben Sacks, Kay Kerlin & referred student Sophie. Neighbors have photos Day & night.... yet we have had little guidance on how to assist or how to assist the SVRed Fox....
we would like to assist this species to survive.... they are truly a beautiful creature!
by Claudette A Mitchel-Weismantel
on May 24, 2021 at 2:36 PM
Valley Red Fox in South West Placer County: May 24, 2021...hearing the last several weeks night calls... seems to be alone??? Genetically Indigenous to our area?!?
by jordan
on June 7, 2021 at 6:26 AM
I didn't ask who to call when I see one, I see a couple each day but they to be trained or something, I asked how do we as humans help them from extinction.
by Ann Mahaney
on September 12, 2021 at 10:29 AM
I live in Sacramento’s Pocket neighborhood. I’ve saw a red fox about 5 years ago (I have video and will confirm date before I report). Evenings I hear calling that I think is red fox. I will make recordings.
by Craig Stankiewicz
on June 10, 2022 at 11:43 AM
Hi, We live on an acre of private property in Lake County California. Our Community Association has issued to us a "Notice To Abate" a small vegitative section of our property where a family of wild Red Foxes live. We do not wish to disturb the Foxes habitat.
Are there any animal protection regulations which I can use to thwart the Community Associations demand?
Reply by Pamela Kan-Rice
on June 10, 2022 at 11:52 AM
Hi Craig, you may try contacting your local UC Cooperative Extension office for advice https://celake.ucanr.edu/Staff.
Leave a Reply: