A cross-section of an oak infested by the goldspotted oak borer shows the damage done by the non-native beetle.
As autumn temperatures cool, many people like to warm themselves with a cozy fire.  When choosing firewood, natural resources experts ask that people use local firewood to avoid moving harmful insects and plant diseases into and around California.

“Buy firewood from a local source close to your home to prevent the spread of insects and diseases, such as the goldspotted oak borer, sudden oak death and emerald ash borer,” said Tom Scott, a UC Cooperative Extension specialist based at UC Riverside who studies these invasive pests.

“Firewood is one of the least-regulated natural resource industries in California,” said Scott, “but this is a situation where the university can play a critical role in changing behavior through research and education rather than regulation.”

Scott and his UC Cooperative Extension colleagues are working with the U.S. Forest Service, the California Firewood Task Force and other agencies to educate and discourage woodcutters, arborists, firewood dealers and consumers from transporting infested wood.

“Many people don’t realize that firewood can harbor harmful insects and plant pathogens. Moving around infested wood can introduce those pests and pathogens to new areas where they might take hold and could have devastating impacts to trees, our natural resources and local communities,” said Don Owen, California Firewood Task Force chair and CAL FIRE forest pest specialist based in Redding.

For example, female goldspotted oak borers lay eggs in cracks and crevices of oak bark, and the larvae burrow into the cambium of the tree to feed so they may not be visible.

The goldspotted oak borer has killed more than 80,000 oak trees in San Diego County in the last decade and Scott hopes it can be contained in that region. The half-inch-long beetle is native to Arizona but not to California and likely traveled in a load of infested firewood, according to Scott.

In his research, Scott has found outbreaks of goldspotted oak borer 20 miles from the infested area, which leads him to believe movement in firewood is the most likely reason for the beetle leap-frogging miles of healthy oak woodlands to end up in places like La Jolla. In communities where people harvest local trees for firewood, oaks have remained relatively beetle-free, Scott said.

In addition to concealing goldspotted oak borer, firewood may harbor other destructive invasive species such as emerald ash borer or the pathogen that causes sudden oak death. Sudden oak death has killed more than a million oak and tanoak trees in 14 coastal California counties, from Monterey to Humboldt. The highly destructive emerald ash borer has been identified in Michigan, Indiana, Ohio and Illinois, but not California.

“Our best defense against the GSOB outbreak is the enlightened self-interest of Californians purchasing firewood,” Scott added.  “If you want to protect the oaks around your house, neighborhood, and nearby woodlands, make sure that you’re not buying wood that could contain these beetles.”

In a broader sense, buy firewood from reputable dealers, from local sources whenever possible – and try to make sure that the wood you buy has been properly seasoned and doesn’t contain pests.

For more information about the pests and diseases that threaten California’s oaks, visit these websites: 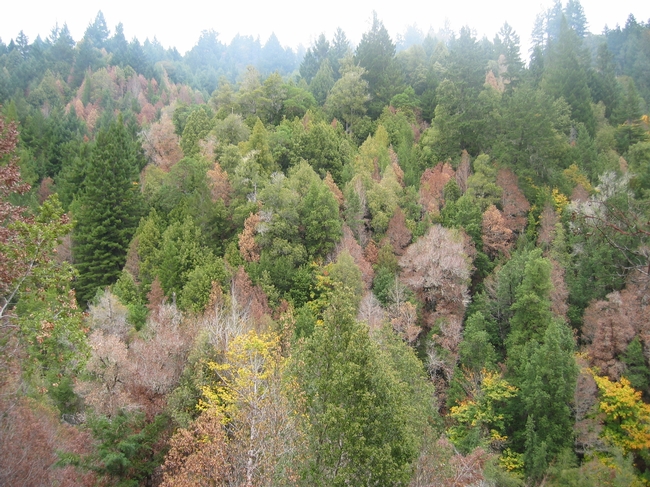