Is Shipping Water to China in Alfalfa Hay Immoral?

For the latest twist in the rhetorical water wars in western states, you may be interested in a recent Wall Street Journal op-ed piece, featuring, you guessed it, that scourge of agricultural water critics, alfalfa. This article decries the export of alfalfa hay from California to China, making the point that when alfalfa is exported, it represents the export of badly needed ‘water' (see http://alfalfa.ucdavis.edu/-files/pdf/CulpGlennon2012.pd ffor a pdf of that article). This is, of course, not real water nor the water contained in the crop itself, but the water used to irrigate the crop, water that could be used for something more important–at least according to the authors.

Criticizing alfalfa for its “water guzzling” (as the authors put it) habits is nothing new.  This ‘Rodney Dangerfield' of crops seems to be a favorite whipping boy of western crops due its supposed waste of water (more on that later).

Why stop with alfalfa?   However, if one is to decry the export of ‘virtual water' in the form of ag products, why stop with alfalfa?  Hay ranks 16th in value of ag exports from California.  California exports vastly more ‘water' (if you will) used to produce crops such as almonds (#1 export crop, nearly 80% exported), citrus and rice (the majority of which are exported) than the water embodied in California hay. Why not criticize wine, walnuts and tomatoes, which are exported in large quantities?  Could it be that people LIKE and appreciate wine and walnuts, and thus are reluctant to criticize, while they really can't relate to a bale of hay?  Ah, the lowly alfalfa plant!

Nationally, the largest exported crops are soybean, corn, and wheat at about 47, 38 and 27 million metric tons in 2012, respectively, dwarfing that of the about 3 million MT of all hay (including alfalfa) exported from western ports.  Water to produce 112 million MT of grains, now that's a lot of virtual water!  Oh, but maybe that's different water than the authors are talking about, perhaps water not in the cross-hairs of water lawyers?

Exporting Water a new Angle? The targeting of exports with regards to water represents a new shift in the ongoing Mark Twain-ian water fights over the best use of water (“Whiskey's for drinking, water's for fightin' over”).  Do we really want to go there?   What about the embodied ‘water' in all of the goods (including food) imported into the US?  What about exporting water in the form of silicon chips?  Is exporting ‘water' in the form of almonds, citrus, wine or alfalfa hay to consumers in China, Japan, or Europe, really any different than exporting ‘water' in the form of California food products to New York, or for that matter, Phoenix or Las Vegas? What is the moral or economic issue here? Farmers depend upon these markets. Most economists laud the value of exports to the US economy, and agriculture is one of the bright spots in US exports, which have struggled to match the onslaught of imports from (guess where) - China.

Although the export of hay is nothing new, it has increased in recent years.  Value of US forage exports have nearly doubled in the past 5 years to over $1 billion (Figure 1).  Japan is a larger importer of US hay than China, but China has gone from near zero imports in the mid 2000s to over 350,000 metric tons in 2012, and there have been dramatic increases in demand from the Middle East. However, export of hay is still a small minority (<10%) of the hay produced in the 7 western states from which it's drawn - alfalfa's biggest market is still the domestic dairies, as well as horses, beef, and sheep.

We may need to get used to this.  Hay exports are part of an important ‘megatrend' which has seen exports of all agricultural products increase, especially to China and other rapidly developing countries, but also the Middle East and Southeast Asia.  The exports of hay to Japan, Korea and China are, to a great extent, an anomaly of our imbalance of trade, since filling ‘empties' back to Asia can be done very cheaply, usually for less than overland truck transport in the US.

A Question of Value. I suppose one could argue that transferring water from food production in the Imperial Valley to support (for example) housing tracts in Las Vegas is a morally superior and more defendable use of water than growing alfalfa hay.  The ability to pay has, and always will, favor urban water use over agricultural use.  But this is not specific to alfalfa – there are virtually no food-producing enterprises that can compete economically with urban demand for water.  Food takes a lot of water to produce, whether its lettuce, walnuts or alfalfa, either from rain or irrigation.  Questions arise, though, about the long-term consequences of degrading our agricultural capability by moving water from food production to urban use. Alfalfa in southern California can be harvested up to 12 times/year.
And yes, alfalfa is used to produce food.  It is essentially a ‘food producing engine' -- after being cycled through a cow, of course -- producing milk, cheese, meat and yogurt.  Alfalfa has been called ‘ice cream in the making'.  Contrary to the denigration of alfalfa with regards to water in this article, alfalfa is one of the most water-efficient crops due to its high yields, high quality, and the fact that 100% of the crop is harvested.  An average California alfalfa field is capable of producing 2400 gallons of milk per acre, whether the cow is in San Bernardino or Beijing. Additionally, the economic value of alfalfa has been frequently underestimated.  It's the 4th largest economic crop in the US, and over the past 30 years, California's alfalfa crop has been worth an average of $1 billion/year (2009 dollars), no slouch.  But more importantly, it is inextricably linked to the >$7 billion California dairy crop, the most important ag sector in California.

Keep more value here?  I find myself agreeing with the authors that that it would somehow be better to produce milk here for export, to keep more of the ‘value' here, rather than shipping hay. The same sentiment has been expressed for the export of cotton, while we import blue jeans.  Such is the nature of globalization and economics.  The good news is that milk exports have also increased substantially over the past 10 years. (Milk is second only to almonds in crop export value from CA.) But the reality for those areas which export hay is that there is not a large local dairy demand in those areas – and the transportation infrastructure favors channels to ports in Long Beach, Oakland, Portland, or Seattle, not to the dairy areas. Alfalfa receives no subsidy and the crop mostly follows free market principles – so growers seek the best market for their crop.  These markets represent important economic opportunities for California farmers.

Although the authors don't talk about it, it is abundantly clear to me that agriculture needs to increase water-use efficiency of alfalfa, as well as other crops, whether these crops are exported or used locally.  But the inordinate critique of the export of ‘water' in the form of only one (minor) export crop seems pretty narrow, incomplete and shortsighted. 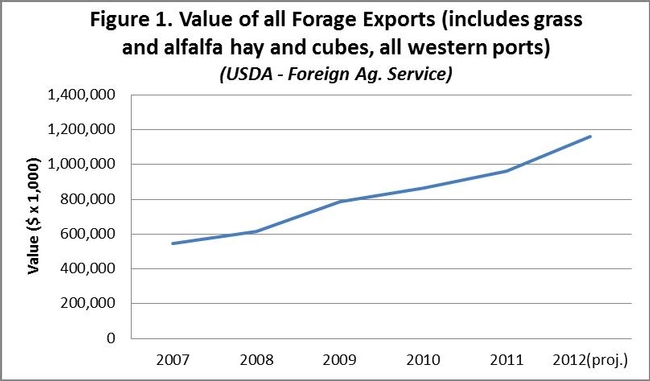 Hay Exports
Comments: 4
Comments:
by Laurie Askew
on December 6, 2012 at 11:03 AM
Thanks for keeping it real.
by Glenn M.
on September 30, 2014 at 9:03 AM
Wine, walnuts, and tomatoes are people food, while hay is to feed cows. It is scientific fact that animal production is a highly inefficient means by which to produce calories/protein. Hay production IS wasteful, and the arguments to defend it are weak - at best.
by Daniel H Putnam
on February 17, 2015 at 12:18 PM
Hi Glenn;
Sorry I missed your comment last fall. Thanks for your comment.

Unless I miss something - animal production systems (which originate with forages) are currently used as human food. And, unlike several luxury crops (wine comes to mind), it provides staple foods that people use every day. Each day. Lots of people. Maybe you don't use dairy or meat, but lots of people depend upon them.

When it comes to efficiency issues, I think some of the critique of animal agriculture is valid, but some is not. Inefficiencies abound in agriculture. I'm not sure how 'efficient' it is to provide food calories in the form of fermented grape juice. It's certainly not a 'need' for human health (although some, including me, might disagree). Lettuce is my favorite example - pretty minor contribution to human nutrition for the water footprint - so if you want to dive into it - don't just accept commonly-held prejudices. Animal agriculture has its impacts, but also produces a lot of food and performs significant roles in absorbing products which would otherwise be waste products - e.g. citrus pulp, cottonseed, bakery waste, wine pumice (the list goes on for a long time). Pastures and alfalfa also provide significant environmental roles including wildlife habitat.

Don't get me wrong, I deeply appreciate wine, lettuce, walnuts, and many of the other wonderful products from agriculture. The fact is that ALL of agriculture is having an impact on water resources, not just a single crop, and needs to become more efficient in water use.
by Charlotte Wilson
on November 19, 2015 at 3:36 PM
But China doesn't own the land in California and Oregon. In Arizona, the Saudis own the land so the alfalfa belongs to them.
Leave a Reply: