Urban entomologist Andrew Sutherland
What a year! Termites seem to be capturing the interest of more folks than usual.

Lewis covered the life and legacy of Collins, an African-American entomologist and civil rights advocate whose termite research spanned five decades. Lewis praised her "pioneering studies on the mechanism and evolution of termite desiccation resistance across various habitats provided foundational knowledge for generations of entomologists, field biologists, and ecologists."

Did termites fade into obscurity after Lewis' heralded ESA seminar?

"Interestingly, this year's subterranean termite swarms generated way more pop media interest than usual," said Sutherland who holds a doctorate in entomology (2009) from UC Davis. "Perhaps it's because we had more people at home than in previous years (pre-COVID...also, 2019 and 2020 swarms occurred during Thanksgiving weekend, so folks may have been preoccupied or traveling)."

"Since they live underground, they have to have opportunities to meet and fall in love,"  Sutherland told journalist Leah Worthington of the Redwood City Pulse.  "So it's kind of like a big singles bar in the air...The king and queen form what's called a nuptial pair. And that nuptial pair starts a colony, usually in a piece of wood that is partially buried in the soil." A subterranean termite explores its surroundings. (Photo by Kathy Keatley Garvey)
"One newsworthy item with regards to California: we have detected several reproducing populations of the Formosan subterranean termite, Coptotermes formosanus, in southern California (San Diego, Riverside, and Los Angeles counties all have recent detections)," Sutherland pointed out. "This termite is considered the most damaging pest species in the world and is an invasive species of interest to the state and to the pest control industry. My colleagues in Southern California have produced some informational alert materials recently. (See PDF)

In his UC ANR blog, published Oct. 21--in the midst of the fall subterranean termite swarm season--Sutherland explained the situation well: Warming their flight muscles, these winged subterranean termites are ready to fly. (Photo by Kathy Keatley Garvey)
"Western subterranean termites may also swarm in the spring, especially in southern California, foothills of the Sierra Nevada, and the northern Sacramento Valley. No matter the swarm season, the goal for the termites is to form 'nuptial pairs' of virgin 'queens' and 'kings' that will mate and venture out into the landscape to start their own colonies, which may eventually consist of hundreds of thousands of individuals that forage over thousands of square feet! Seeing fluttering termites in the air means that nearby colonies are swarming, but it does not necessarily mean your home or other wooden structure is infested. On the other hand, seeing winged termites issuing forth from the ground or a piece of wood means, unequivocally, that there is a mature colony underneath, potentially infesting or threatening nearby wooden structures."

A Solano County homeowner witnessed the phenomenon on Oct. 27. She saw hundreds of them exiting the soil by her ailing black walnut tree on Buck Avenue, Vacaville.  The insects literally carpeted the ground and sprawled out on fallen leaves. As the sun warmed their flight muscles, the winged termites took off--right into the beaks of swooping birds.

What should you do if you spot a swarm?

As Sutherland wrote in his blog: "If observing a swarm on your property, especially if near your home or other structures, you can hire a professional termite company for a detailed inspection. Make sure to photograph or otherwise note the swarm location so that the inspector can start there. Even if you don't see swarms on your property, regular (every three to five years) inspections will help detect infestations before they cause significant damage and prevent future infestations. There are several proven management strategies for termites; review UC IPM's Pest Notes: Subterranean Termites."

"For now, perhaps we can all appreciate the wonder of this natural spectacle," Sutherland wrote. "Winged termites are great sources of food for birds, lizards, other insects, and spiders. Termites also provide important ecosystem services, such as decomposition of wood and fallen leaves, contribution to soil structure formation, enhancement of water infiltration in soil, and facilitation of nutrient availability to plants. Furthermore, western subterranean termites are native to California and have been here long before we built wooden structures on top of their colonies. (Termite) love is in the air!

The UC IPM Pest Note relates that "Subterranean termites are common throughout California and can be found infesting fallen trees, stumps, or other dead wood in contact with the soil in the forest, landscape, or structural lumber in our houses...The most common subterranean termites, Reticulitermes, can be encountered in nearly all regions of the state, from the sand dunes of the coast to the upper elevations of the mountain ranges and even in some of the desert areas. The species of Reticulitermes are the most destructive termites found in California. They are small in size compared to dampwood and drywood termites, but mature colonies can contain hundreds of thousands of individuals."

Urban entomologist Thomas Chouvenc of the University of Florida wrote about controlling termites in his article, "Killing It in the Eggs: A Termite Bait Story," published Dec. 7 in ESA's Entomology Today. "Subterranean termites represent a legitimate concern for many homeowners in the United States because of their potential damage to wood structures," he began and went on to discuss chitin synthesis inhibitor (CSI) bait formulations.

CSI is something that termites looking for love want no part of. 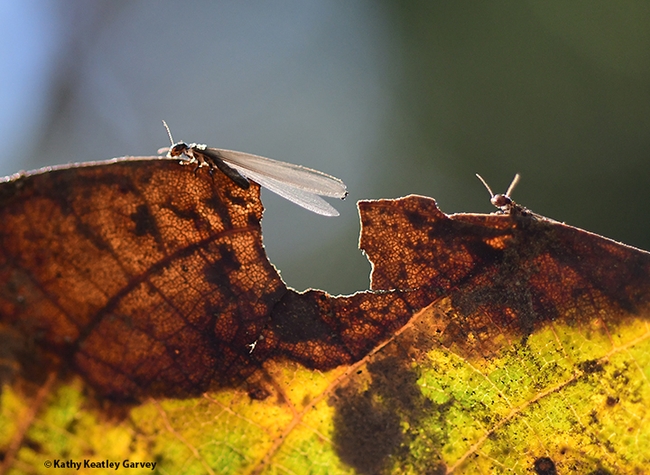 A winged termite ready for flight as another termite waits. This image was taken Oct. 27 in Vacaville, Calif.(Photo by Kathy Keatley Garvey) 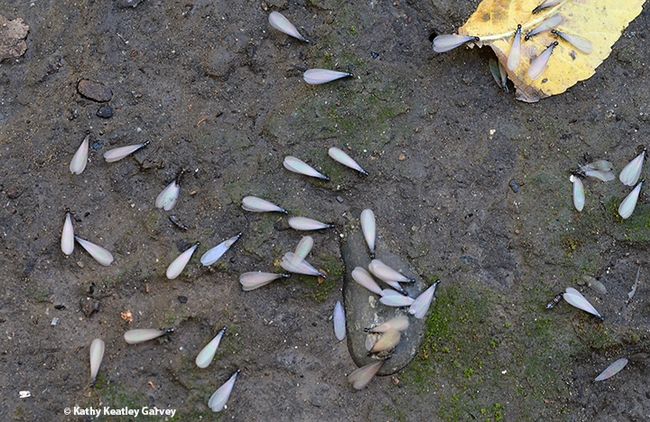