A honey sips nectar from a Leptospermum scoparium keatleyi, a plant also known as "the New Zealand tea tree." (Photo by Kathy Keatley Garvey)
Oh, the squabble over what is--and what is not--manuka honey. The battle is far from sweet.

Manuka is to honey what Château Cheval Blanc 1947 is to wine connoisseurs. Buy a bottle of that wine and you'll fork over $304,375. Buy an eight-ounce jar of manuka honey and you'll lighten your wallet by $1790.

Bees make manuka honey from Leptospermum scoparium, also known as "The New Zealand tea tree" or more accurately, "bush." The honey prized for its health benefits, including its antibacterial and antifungal properties and anti-inflammation qualities.

According to webmd.com, "The major antibacterial component in manuka honey is methylglyoxal (MG). MG is a compound found in most types of honey, but usually only in small quantities. In manuka honey, MG comes from the conversion of another compound, dihydroxyacetone, that is found in high concentration in the nectar of manuka flowers."

"The higher the concentration of MG, the stronger the antibiotic effect. Honey producers have a scale for rating the potency of manuka honey. The rating is called UMF, which stands for Unique Manuka Factor. The UMF rating reflects the concentration of MG. To be considered potent enough to be therapeutic, manuka honey needs a minimum rating of 10 UMF. Honey at or above that level is marketed as UMF Manuka Honey or Active Manuka Honey.

Jelisa Castrodale recently wrote in Wine and Food: "The New York Times reports that New Zealand's honey producers have long argued that it's the only country that can produce true manuka honey, because it's the only place where the manuka bush (Leptospermum scoparium) is found. Australian manuka, they argue, comes from other different-but-related species. (The New Zealanders have previously suggested that the Australian version should be called tea tree honey.)

Well, we just think of the bees and that beautiful plant.

For five years, we grew a Leptospermum scoparium keatleyi, the tallest and rangiest variety of the Leptospermum scopariums. It bears our family name, Keatley;  New Zealand sea skipper/horticulturist Capt. Edward John "Ted" Keatley (1875-1962) discovered it and named the variety "keatleyi."

Factoids: According to the Maritime Museum in Wellington, New Zealand, Capt.  Keatley once commanded 28 of the Northern Steam Ship Company's vessels. He also was considered an authority on the flora of the Auckland province. In June 1961, the Royal Horticulture Society awarded Capt. Keatley the "Award of Merit" for his discovery of the keatleyi, or "royal pink manuka."

Sadly our "Keatley" plant didn't make it past five years. But generations of honey bees nectared on the blossoms while the plant thrived in our yard.
Manuka honey will be among the worldwide honeys tasted, discussed and analyzed at the UC Davis Honey and Pollination Center's Sensory Evaluation of Honey Course, set Nov. 7-9 in the Robert Mondavi Institute (RMI) on the UC Davis campus. Participants will taste honeys from Thailand, China, Madagascar, Brazil, Canada, New Zealand, as well as the United States. The three-day certificate course covers "everything in the world of honey," says director Amina Harris. 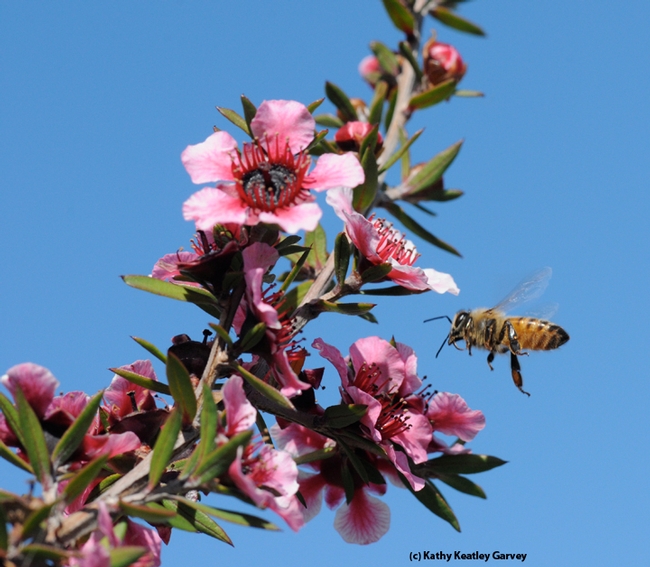