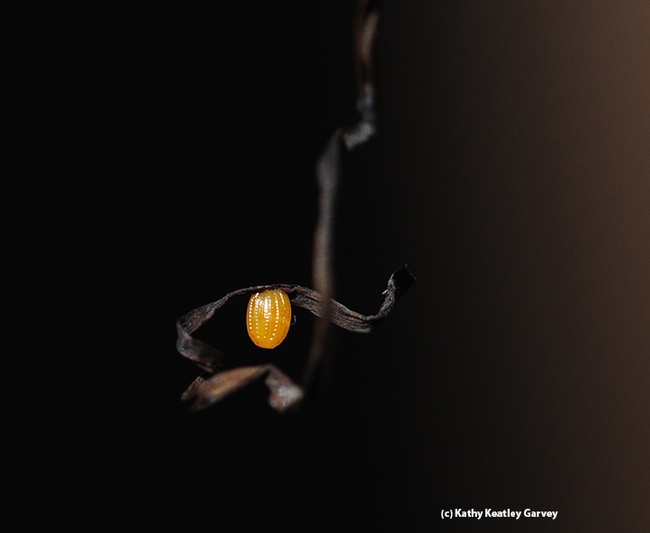 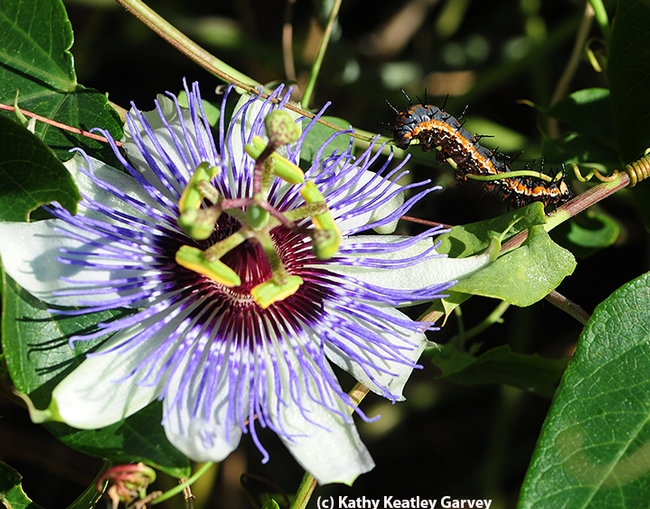 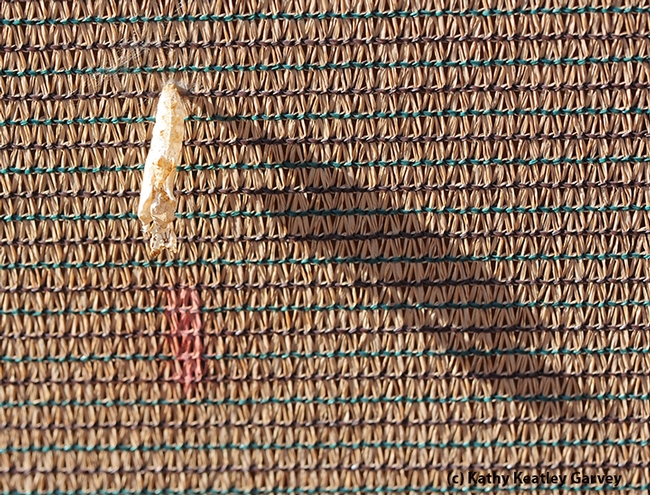 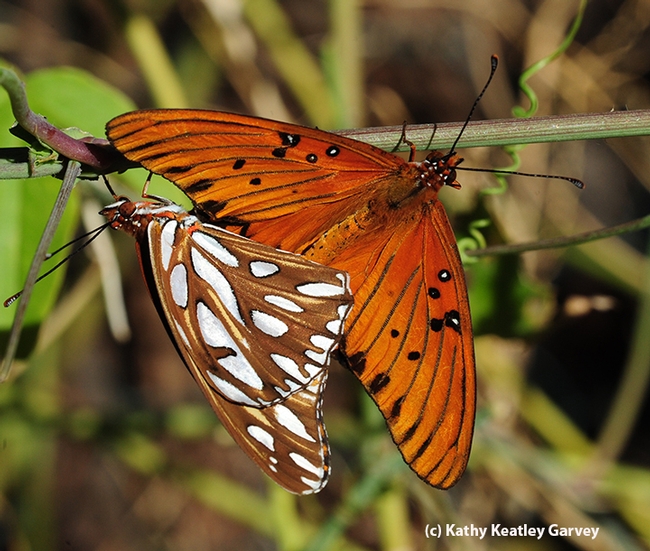 Looking back, it was a year of wonder in our pollinator garden, a year filled with flourishing lavender, salvia, catmint, honeysuckle, lantana, passionflower vine, foxgloves, cosmos, California poppies, rock purslane, basil and oregano, with three towers of jewels (Echium wildpretii) anchoring the garden. The bees sipped nectar, praying mantids ate the bees, bluejays ate the praying mantids, and hawks ate the bluejays. As we watched the hawks splash in our birdbath, we wondered about the bees, jays and mantids that were all part of this circle of life that happened in our garden.

So, Bug Squad on the last day of 2014 will include four photos of two Gulf Fritillaries becoming one. These Gulf Frits (Agraulis vanillae) provided us with eggs, larvae, chrysalids and more adults. They, along with the other pollinators that inhabit our garden, make our flowers complete, our garden complete and our lives complete.

May all your gardens be filled with the buzz, the flutter and the whirl of pollinators in 2015! 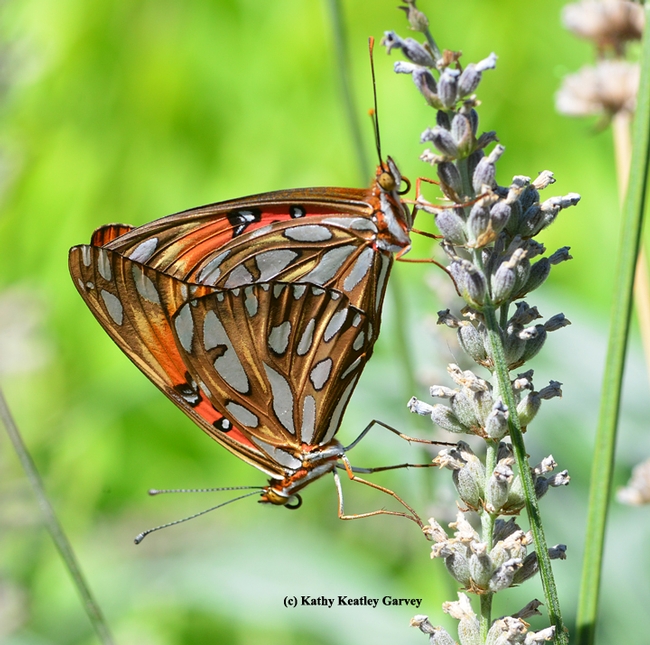 Two Gulf Fritillaries becoming one in the lavender. (Photo by Kathy Keatley Garvey) 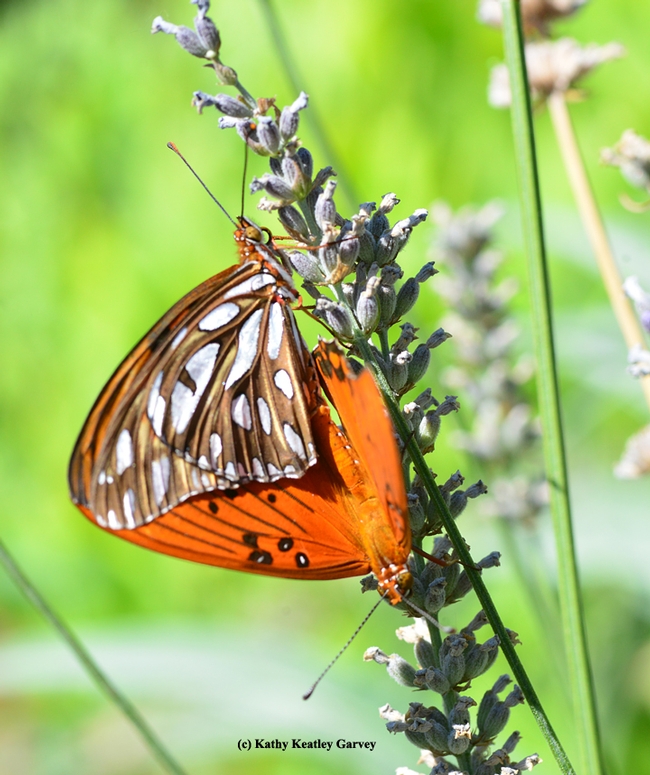 A showstopping move and a show of orange. (Photo by Kathy Keatley Garvey) 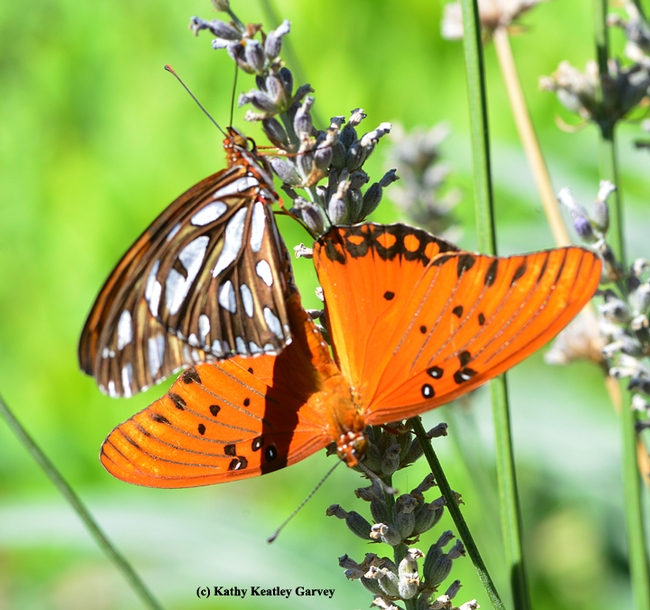 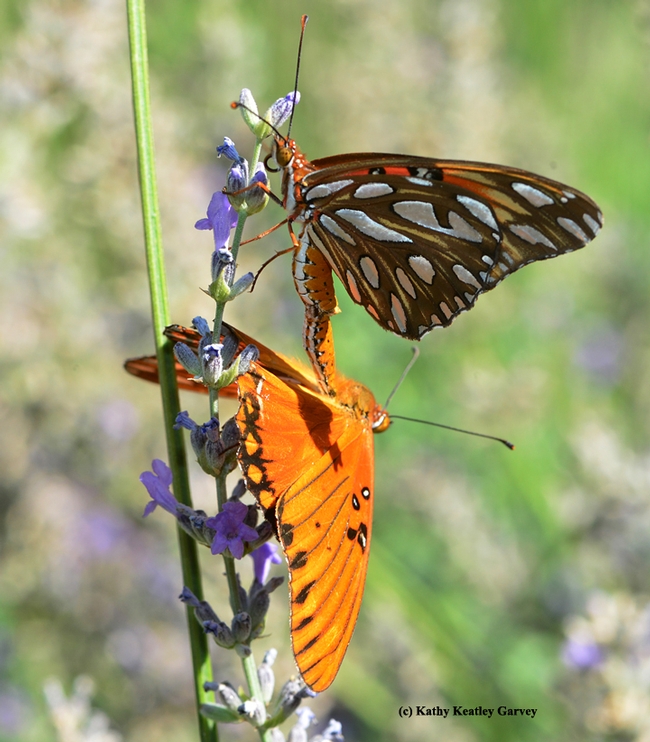 As we near the end of celebrating National Pollinator Week, June 16-22, look around and see all the insects foraging on reddish-orange flowers. And occasionally, you might see a reddish-orange insect like the showy Gulf Fritillary butterfly.

Orange, a color commonly associated with autumn, Halloween and Thanksgiving, is also a color that brightens many of our seasons and draws attention to special occasions, including Pollinator Week.

The reddish-orange Gulf Fritillary (Agraulis vanillae) spreads its wings on a purple coneflower (Echinacea purpurea). A honey bee (Apis mellifera) and a sunflower bee (Melissodes agilis)  forage on a blanket flower (Gallardia). Another bee, the leafcutting bee, Megachile fidelis, and a green bottle fly take a liking to a Mexican sunflower (Tithonia rotundifolia).

Pollinators come in all sizes, shapes, colors and species, from bees, birds, butterflies, bats and beetles, to flies.

Many folks throughout the country observe National Pollinator Week once a year, but some organizations, such as the Xerces Society for Invertebrate Conservation, protect our pollinators and promote pollinator conservation every day.

"Pollinators are essential to our environment. The ecological service they provide is necessary for the reproduction of over 85 percent of the world's flowering plants, including more than two-thirds of the world's crop species. The United States alone grows more than one hundred crops that either need or benefit from pollinators, and the economic value of these native pollinators is estimated at $3 billion per year in the U.S. Beyond agriculture, pollinators are keystone species in most terrestrial ecosystems. Fruits and seeds derived from insect pollination are a major part of the diet of approximately 25 percent of all birds, and of mammals ranging from red-backed voles to grizzly bears. In many places, the essential service of pollination is at risk from habitat loss, pesticide use, and introduced disease." 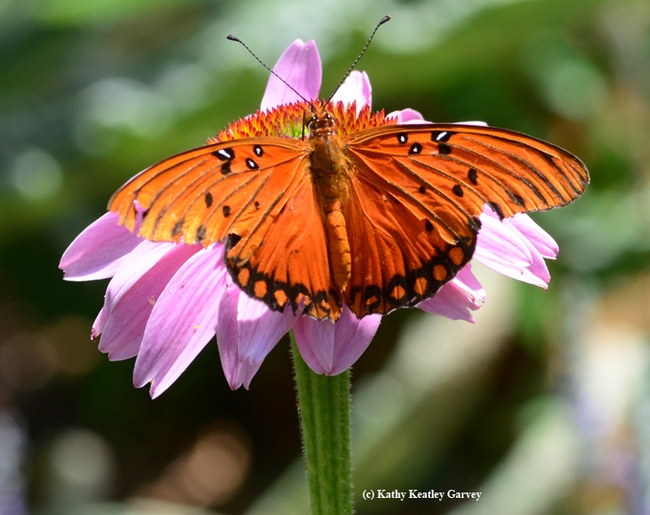 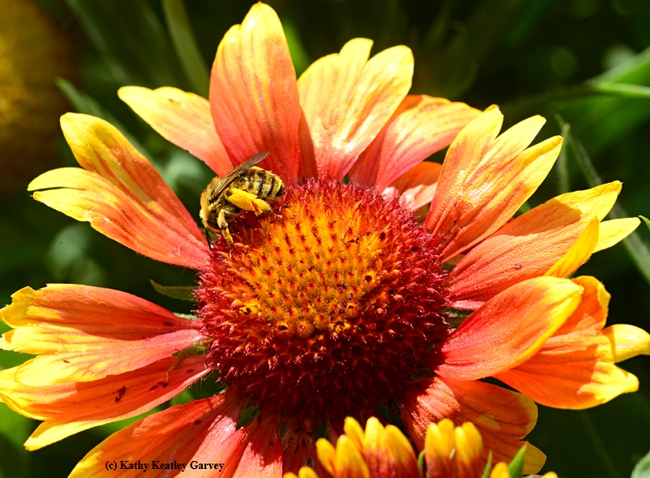 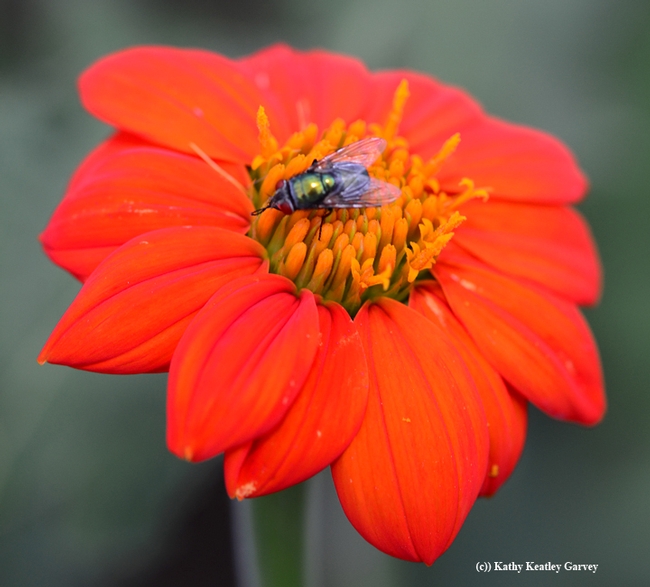 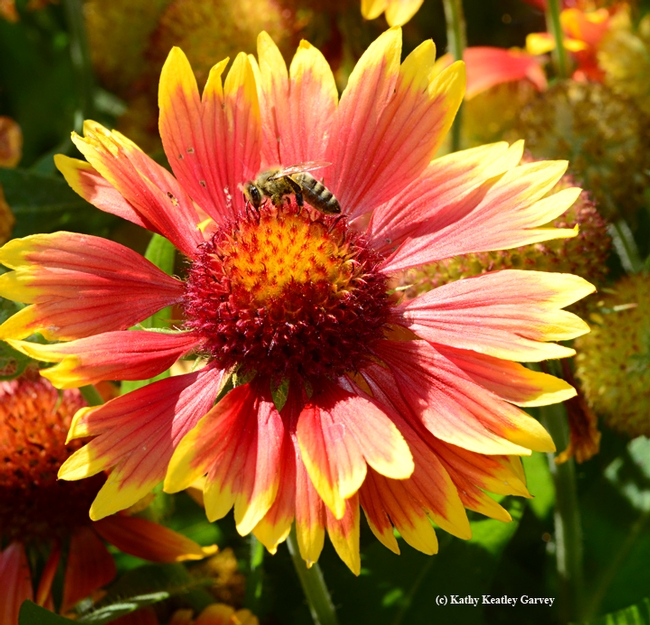 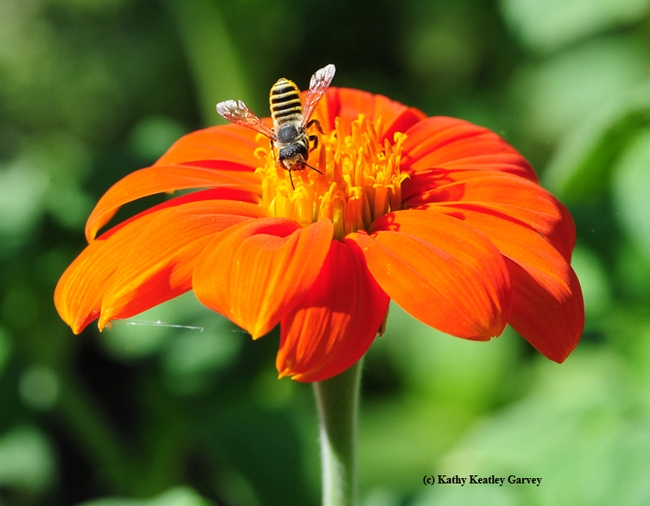 But they're doing it too well.

The gulf frittillary butterflies (Agraulis vanillae) are mating and depositing their eggs on our passion flower vines--as we want them to do--but complete metamorphosis always seems to be incomplete. It's supposed to be egg, larva (caterpillar), chrysalis, adult.

The ever-present scrub jays nest in our trees and swoop down periodically to feast on the caterpillars. Now that they have many mouths to feed, they seem to be even more vigilant.

But today, as luck would have it, we noticed several caterpillars tucked beneath the leaves.

Butterfly expert Art Shapiro, distinguished professor of evolution and ecology at the University of California, Davis, monitors the Central Valley butterfly population, including the gulf frits. In the early 1970s, scientists considered the reddish-orange showy butterfly extinct in the Sacramento/Yolo area. However, since 2000, it's been making a comeback.

Like many butterfly/plant enthusiasts, we planted the passion flower fine (tropical genus Passiflora) to attract them. We watch the gulf frits nectar on the nearby lantana and lay their tiny golden eggs on the passion flower vine.

Sadly, we're not the only ones watching them. 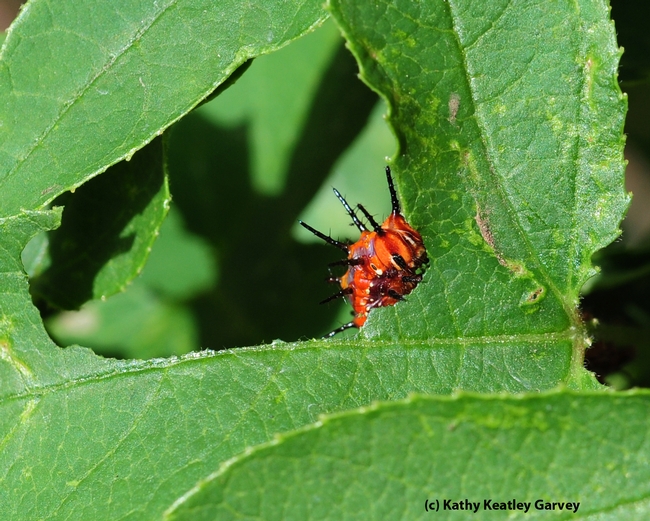 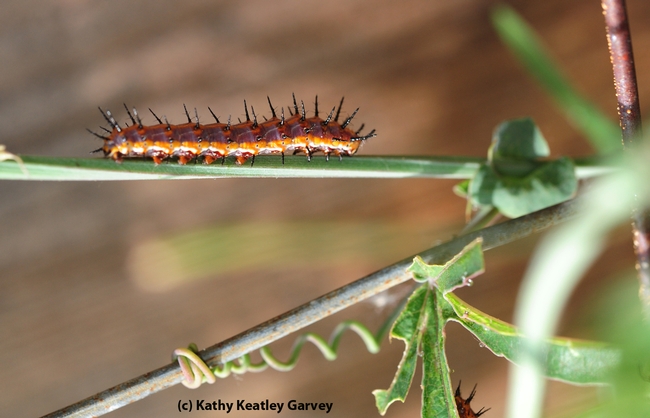 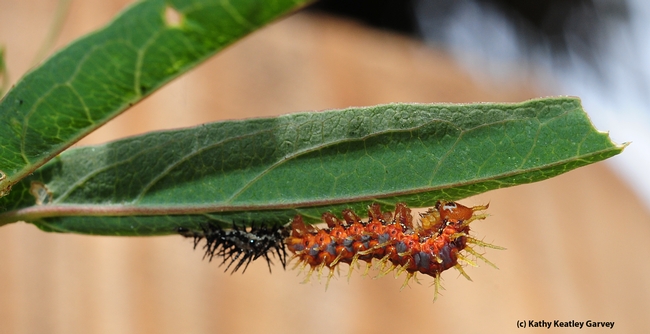 Art Shapiro
It's Thanksgiving, and time to be grateful.

In the bug world, we're all grateful for the people who study insects, monitor them, and share information to impart scientific data and help save declining species.

Take butterfly expert Art Shapiro, professor of ecology and evolution at the University of California, Davis (of Art's Butterfly World).

How he does it, we'll never know, but he has monitored butterflies in the area for more than three decades and knows when a population is declining or increasing.

On a trip to Vacaville on Nov. 12, Shapiro discovered six gulf fritillaries (Agraulis vanillae) in gardens on Buck Avenue, and one at the base of Gates Canyon (that's only the second he's seen; the first he saw in May of 1984).

"I suspect the colony has expanded into the upscale hillside neighborhood off Foothill but had no time to go looking," Shapiro commented.

Meanwhile, he says, there are fewer gulf frits in Sacramento this year than in the last two years.

The gulf frit is one of the showiest butterflies in California. The bright orange-red butterfly, with a wingspan that can reach four inches, was first recorded in the Bay Area before 1908. Shapiro says it became established there only in the 1950s.

The last time we saw gulf frits in Vacaville was a couple of months ago, on Sept. 14. They were all over a passionflower vine (Passiflora)--the adults, the pupae, the larvae and the eggs--in a Buck Avenue garden. Later we saw several nectaring lantana.

Now they appear to be expanding their territory in Vacaville.

We all ought to be attracting them! The larval hosts include passionflower vines, such as the maypop (Passiflora incarnata), blue passionflower (P. caerulea), and corky-stemmed passionflower (P. suberosa). As an adult, the gulf frit nectars on such plants as lantana (Lantana camara), tall verbena (Verbena bonariensis), pentas (Pentas lanceolata), drummond phlox (Phlox drummondi) and something called "tread softly" (Cnidosculous stimulosus). 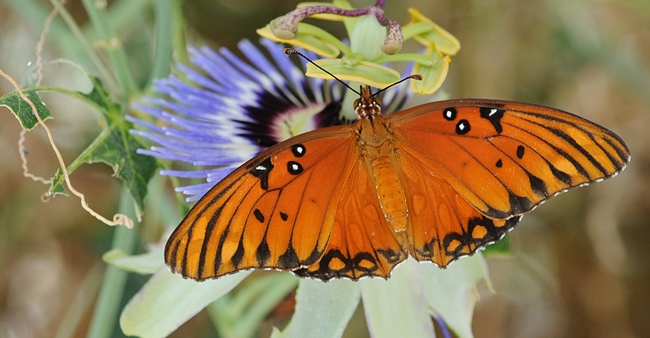 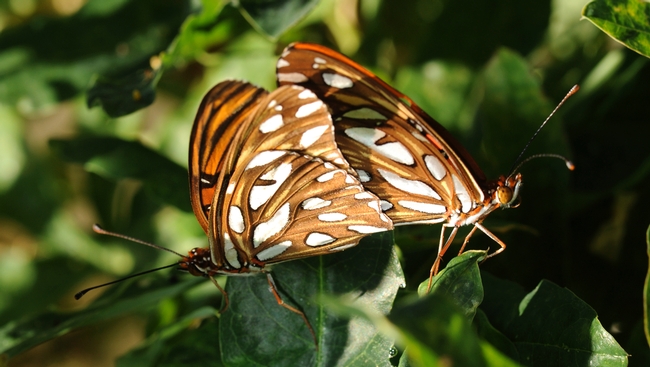 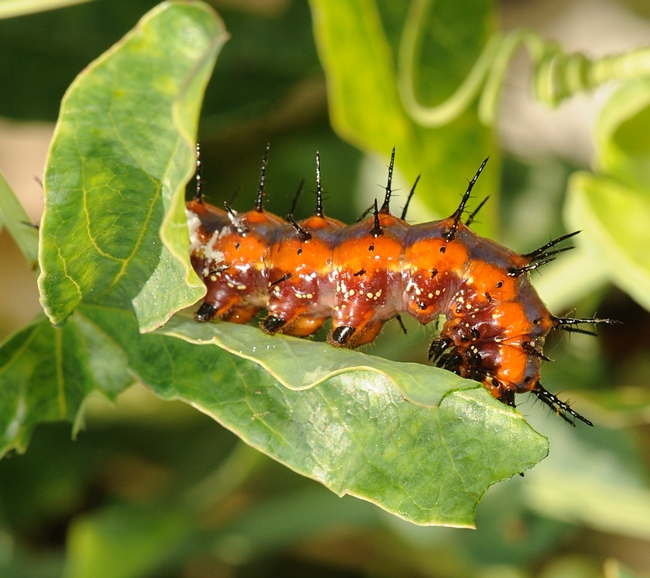