The honey bee nectaring the Penstemon, aka Beardtongue, in Tomales, Calif., didn't seem to mind my presence.

The amber-colored bee was foraging among the purple two-lipped flowers. The plant derives its name from what appears to be a "tongue" (staminode) poking from the "mouth" of the blossom.

It's an attractive flower--indeed, humans hold Penstemon festivals in Flagstaff, Ariz. and Holden, Utah--and the bees like it, too.

The little Marin County honey bee glanced at me and then began cleaning her tongue. Or, as emeritus professor and pollinator specialist Robbin Thorp of the University of California, Davis, said of the photo below: "Caught in the act of cleaning her tongue with the brushes of hairs on the inner sides of her forelegs."

We like to think she was primping for the photo shoot.

Bee tongue and the Beardtongue. 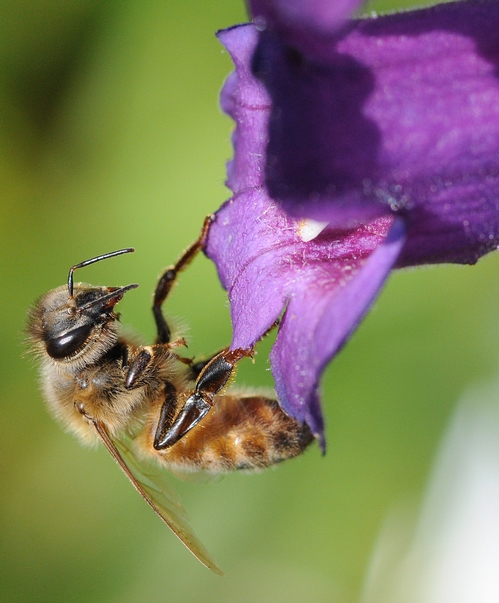 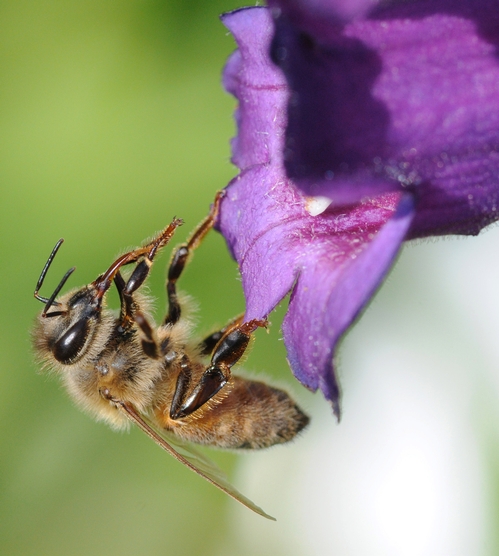 Cleaning Her Tongue
HONEY BEE extends her tongue to its full length and cleans it with brushes of her hair on her forelegs. (Photo by Kathy Keatley Garvey)
Tags: Beardtongue (1), honey bee (209), Penstemon (3), Tomales (1), tongue cleaning (1)
Comments: 0
It's in the Antennae

Surprise: it's in the antennae!

Neurobiologists at the University of Massachusetts Medical School have long wondered how monarch butterflies (Danaus plexippus) can migrate from across eastern North America to a specific grove of fir trees in Mexico.

The scientists figured that the key mechanism that steers the monarchs is in the brain.

Nope. It's in the antennae. The antennae aren't just "noses" or "odor detectors."

"We've known that the insect antenna is a remarkable organ, responsible for sensing not only olfactory cues but wind directions and even sound vibration." said Steven Reppert, professor and chair of neurobiology and senior author of the study, published today (Sept. 25) in the journal Science.

"But its role in precise orientation over the course of butterfly migration is an intriguing new discovery, one that may spark a new line of investigation into neural connections between the antennae and the sun compass, and navigation mechanisms in other insects," he said in press release.

For those of us who are navigationally challenged and have long admired how insects migrate from Point A to Point B, this is amazing. There are circadian clocks in the antennae.

This study makes us look at monarch butterflies in an entirely different light.

Like the monarchs we spotted nectaring last weekend on the grounds of the Luther Burbank Home and Gardens, Santa Rosa.

Or, in other words, those antennae are necessary for sun-related orientation. 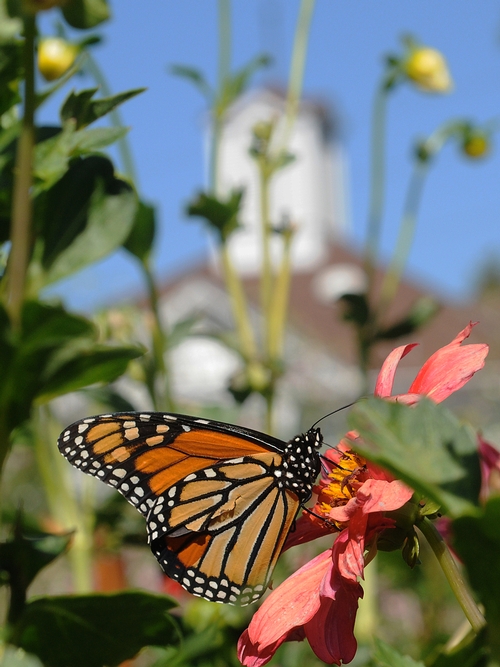 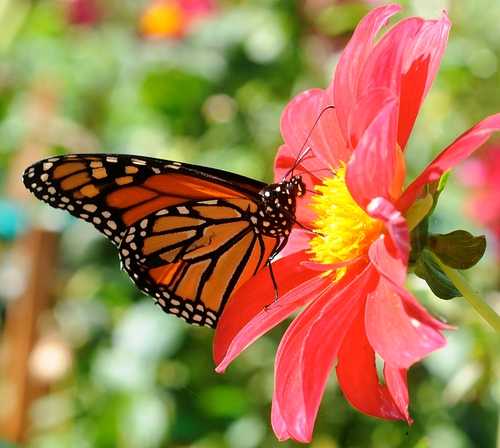 It's in the Antennae
IT'S IN THE ANTENNAE--University of Massachusetts Medical School neurobiologists published an article in Science today (Sept. 25) that identifies a new role of the antennae in monarch butterfly migration. The key mechanism is not in the brain, but in the antennae. This photo shows a monarch nectaring last weekend in the Luther Burbank Gardens, Santa Rosa. (Photo by Kathy Keatley Garvey)
Tags: circadian clocks (1), monarch butterflies (76), University of Massachusetts Medical School (1)
Comments: 2
Ag Ambassadors from Brazil

Two highly talented and enthusiastic university students from Brazil have joined the Walter Leal lab in the Department of Entomology, University of California, Davis, as part of a unique and growing international agricultural exchange program.

The program is known as SUSPROT.

SUSPROT? That's the Sustainable Crop Protection in Agriculture Program, a federally funded program designed to promote scientific cooperation and collaborative education between academic and professional communities in Europe (Belgium, France, Germany and the Netherlands) and the United States.

Aline Guidolin (top right) and Diogo Vidal (bottom left) arrived Sept. 14 to work three months with Leal, a noted chemical ecologist and professor of entomology, and with several other researchers in the lab.

“This year we’ve been able to extend SUSPROT into Brazil,” said Brazilian-born Leal, who  serves as the UC Davis coordinator of SUSPROT. The organization is headquartered at Pennsylvania State University.

All universities participating in SUSPROT were selected for their strong agricultural programs. “It’s a global agricultural industry now, and we need to know how to research the problems and how to solve them,” Leal said. “We need to learn from one another.”

diogoblog
The Brazilian students, both pursuing their bachelor of science degrees, will receive university credit for their work here.   Vidal, 22, is majoring in chemistry at the Universidade Federal do Paraná, Curitiba, and Guidolin, 23, is majoring in biological sciences at the University of Sao Paulo, Piracicaba. “They are very enthusiastic,” said Leal.  “In fact, the same day they arrived, Aline wanted to start the experiments. And when I left the lab Wednesday night (Sept. 16), I thought I was the last one to leave the lab. I was wrong. They were both still here.”

The two young scientists will join the Leal family for Thanksgiving dinner. You can bet that the turkey will be just one of the main attractions. Expect lively conversations on pheromone-binding proteins and gene silencing.

Leal and his wife Beatrix were both born in Brazil and lived in Japan before relocating to Davis. They speak Portuguese, English and Japanese. Their children are also multilingual. Sons Augusto, 18 (now studying at Princeton) and Gabriel, 12, were both in Japan, and daughter Helena, 9, in the United States.

Meanwhile, Walter Leal is gearing up for the SUSPROT exchange trip to Brazil next July. He will accompany a group of UC Davis and Penn State students.

The team “will be exposed to the agricultural or entomology side, the industrial side and the production side,” said Leal. “We can learn a lot from Brazil.  Brazil is known for its ethanol production and is the world’s biofuel industry leader, while the U.S. is still in its infancy. Brazil is the leading soybean producer."

As Leal said, it's "a global agricultural industry now, and we need to know how to research the problems and how to solve them.” 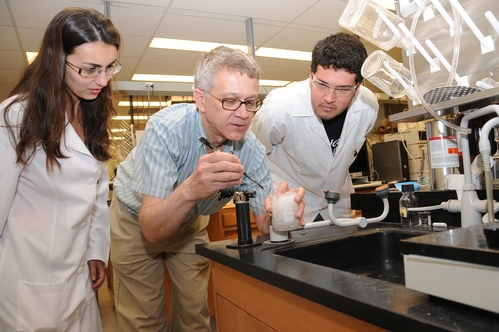 Sage advice: If you're thinking of planting a bee friendly garden, think sage.

Also commonly known as salvia, this bee friendly plant belongs to the mint family, Lamiaceae. The Salvia genus includes some 900 species, so your choices are good.

Red, pink, blue and purple are common; yellow and white, less common. Carpenter bees and bumble bees like to pierce the tubular calyx for the sweet nectar. Sage is also a favorite of honey bees, hover flies and hummingbirds.

For a really stunning sage, check out the sapphire-blue Salvia guaranitica, native to southeastern Brazil, Paraguay and northern Argentina.

You'll see the intense blue flowers long before you notice the honey bees. 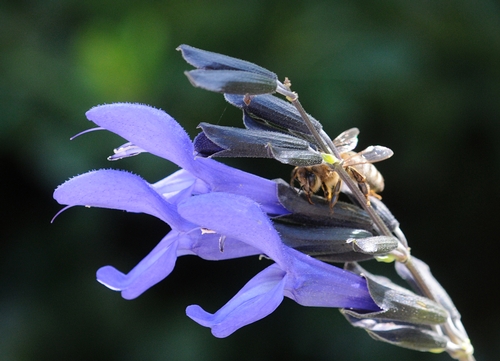 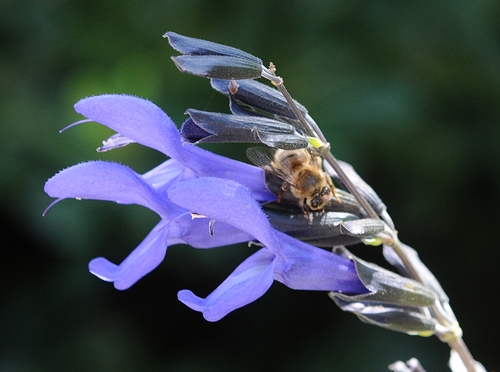 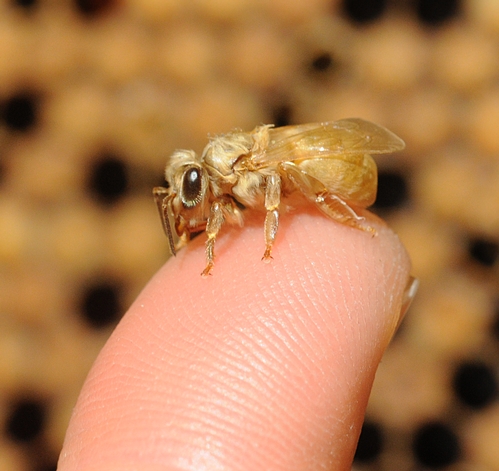 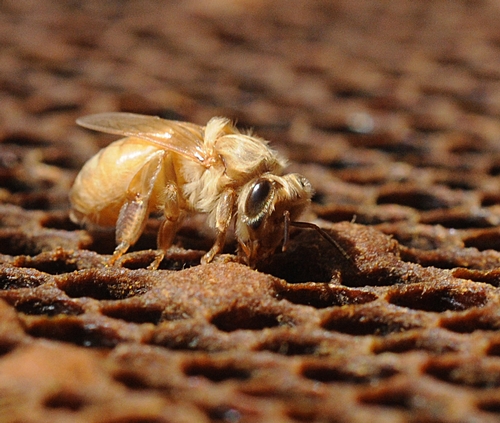