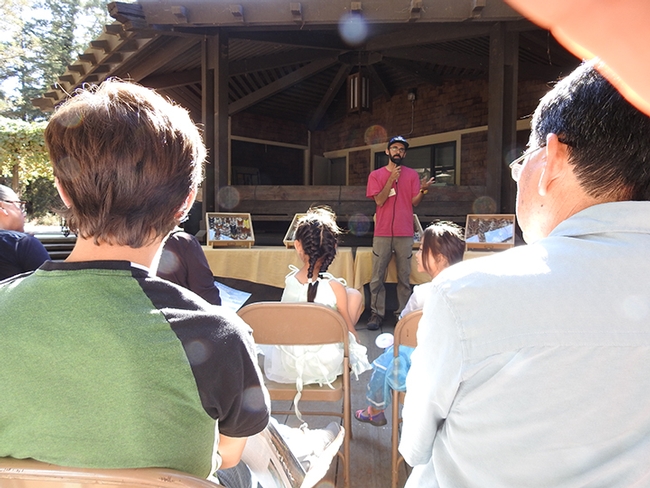 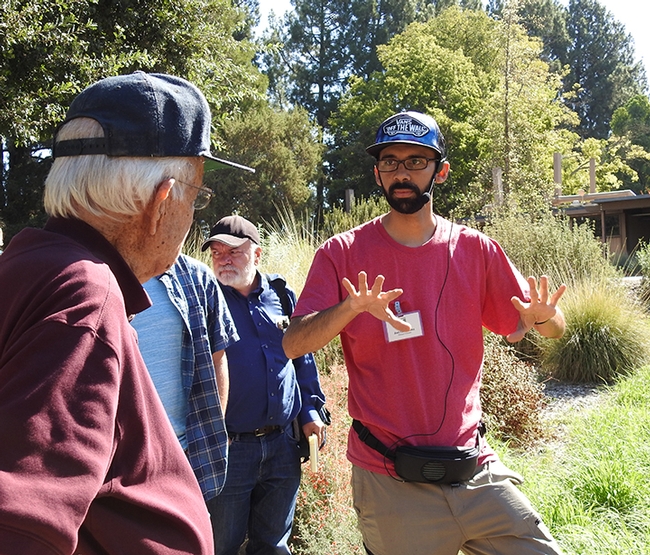 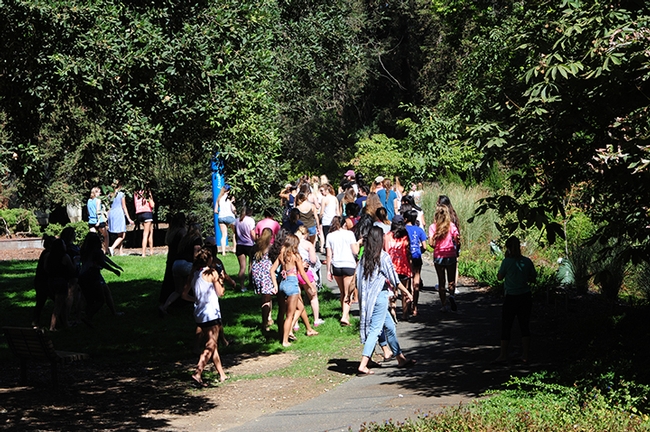 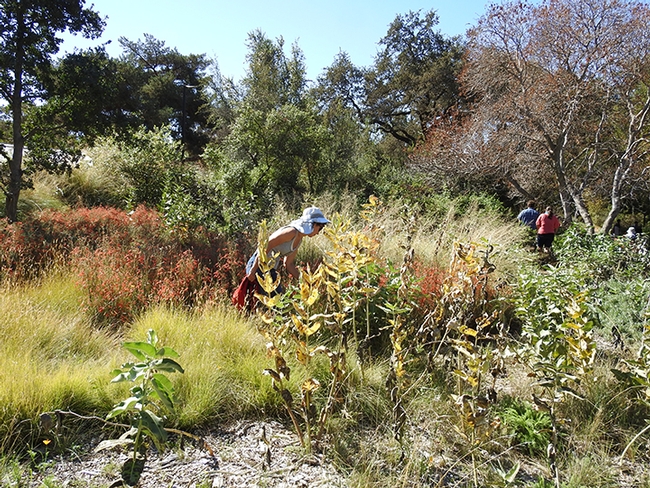 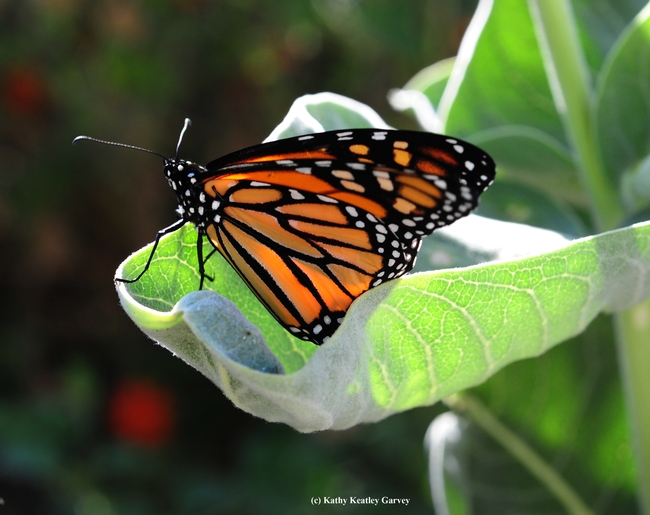 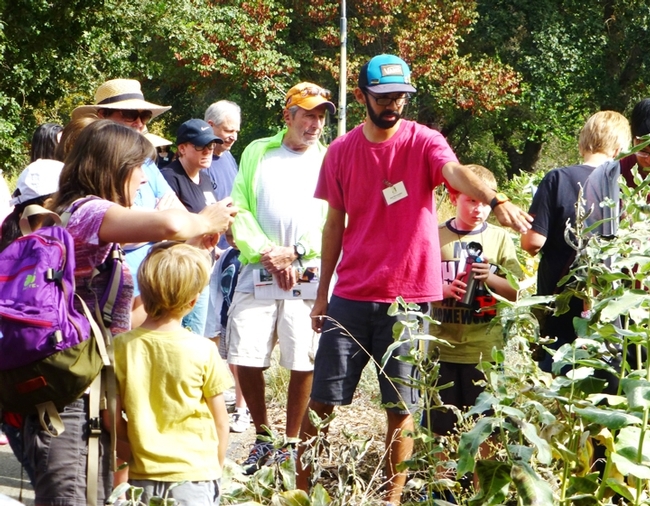 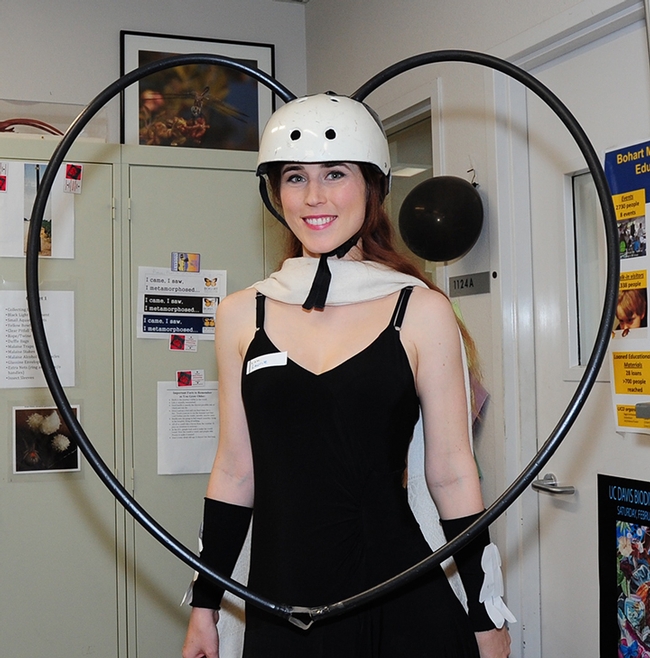 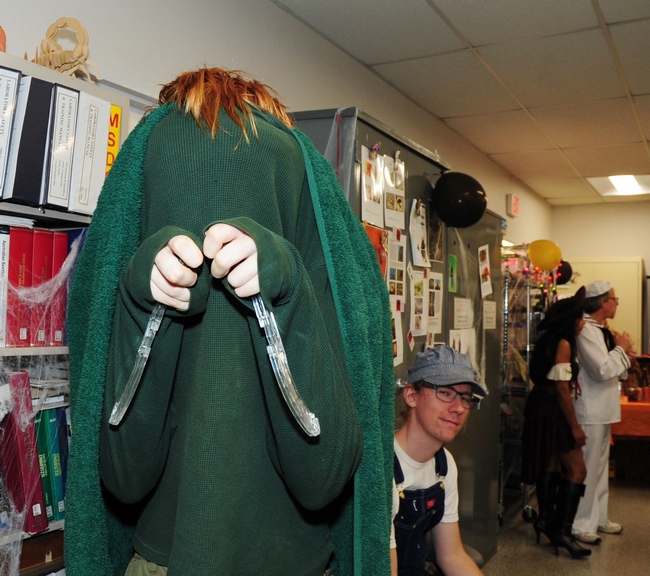 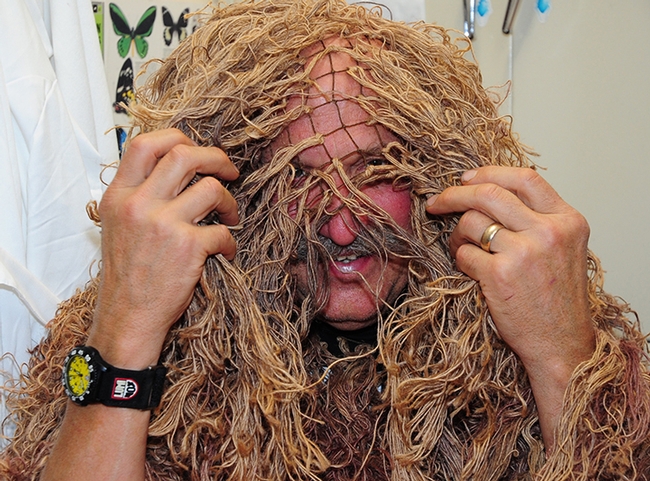 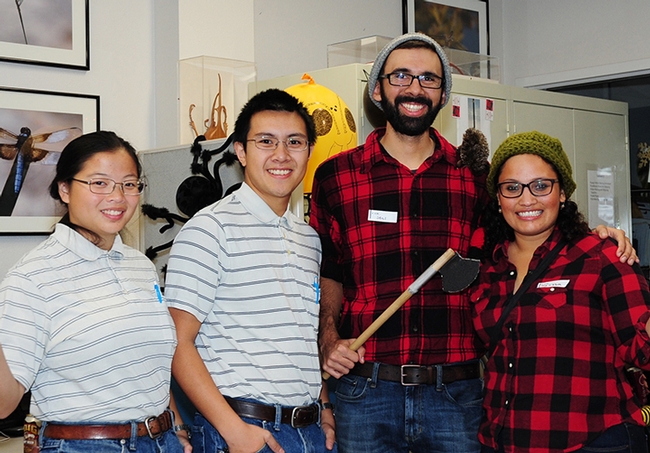 Entomology major Joel Hernandez strikes a walking stick pose. (Photo by Fran Keller)
Entomologists at the Bohart Museum of Entomology at the University of California, Davis, want you to “know your sticks.”

So, they’ve designed a humorous t-shirt inscribed with “Know Your Sticks,” featuring drawings of four sticks: a stick person, a real stick or twig, a Vietnamese walking stick and an Australian spiny stick (family Phasmatidae).

“One of the most popular insects in the Bohart Museum’s live ‘petting zoo’ is the walking stick,” said Fran Keller, who originated the idea of a stick t-shirt, in between studying for her doctoral degree in entomology. “So we thought we’d clarify the sticks.”

The stick person, named Talea persona (Latin for "stick person"), is the kind you might see on a rear windshield, Keller said. The real stick (Twigus stickus) is one you might see in the woods. And the Vietnamese (Medauroidea extradentata) and Australian sticks (Extatosoma tiaratum)? You can see them—and hold them--in the Bohart Museum.

The t-shirts, available in all sizes and many colors, range from $15 (for kids) to $18 (adults) to $20 (adults’ v-neck). They are available online or in the gift shop at the museum, Room 1124 of Academic Surge, located near the corner of La Rue Road and Crocker Lane (formerly California Avenue). Proceeds benefit the museum's educational programs.

The Bohart Museum, directed by Lynn Kimsey, professor of entomology at UC Davis, houses a global collection of more than seven million insect specimens and is the seventh largest insect collection in North America. It is also the home of the California Insect Survey, a storehouse of the insect biodiversity. Noted entomologist Richard M. Bohart (1913-2007) founded the museum in 1946.

The Bohart’s regular hours are from 9 a.m. to noon and from 1 to 5 p.m., Monday through Thursday.  It is closed to the public on Fridays and on major holidays. Admission is free.

The Bohart Museum's “petting zoo” includes such permanent residents as  Madagascar hissing cockroaches and a rose-haired tarantula, in addition to the walking sticks.

Keller suggests that for a novelty photo, stick a walking stick on your "Know Your Sticks" t-shirt, and have a friend photograph the “sticktoitiveness.”

And that’s not something to shake a stick at. 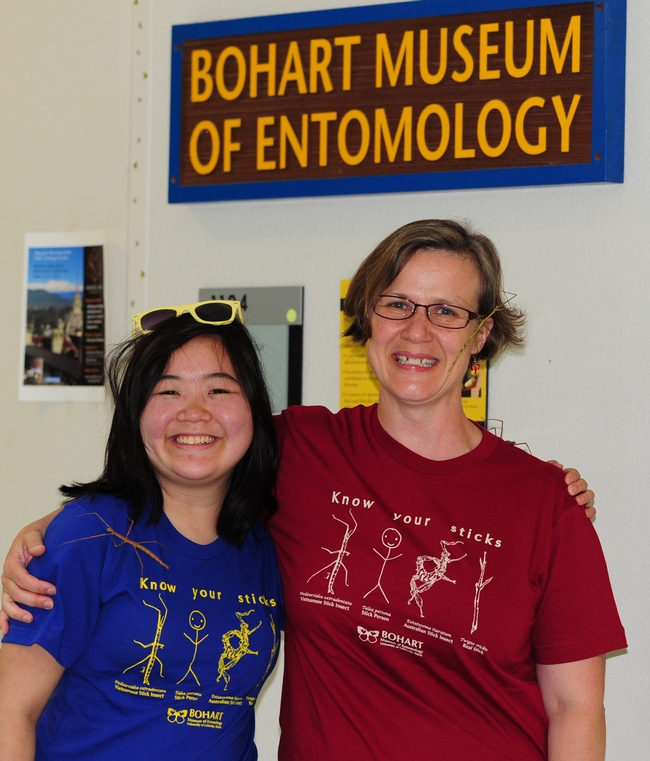 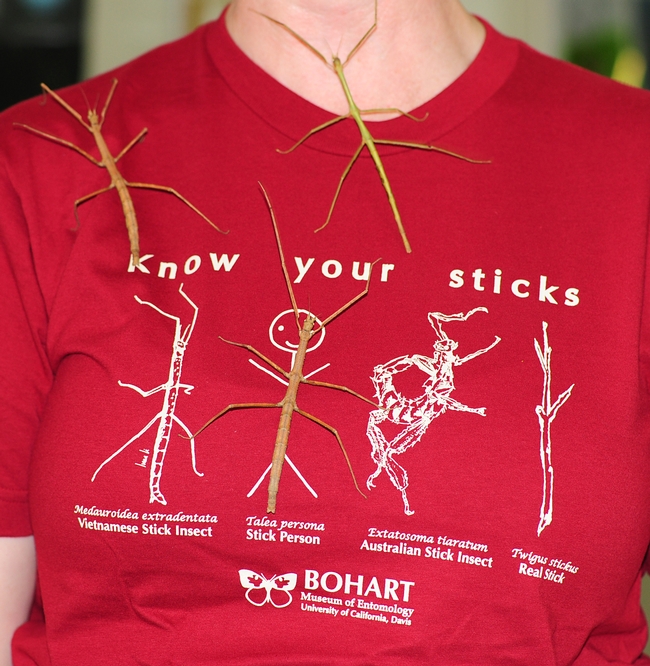 And the folks at the Bohart Museum of Entomology at the University of California, Davis, couldn't be happier.

See, the editors of Martha Stewart Living listed the Bohart insect collection kit as one of the top three gifts for the young naturalist.

How cool is that! Or, how buggy is that!

The Martha Stewart folks wrote on their website:  “Here is a handful of gifts for the pint-size wildlife expert. If your child loves being outdoors and inspecting all things creepy-crawly, read on to find the perfect present."

They cautioned: "Just be sure to enforce a strict no-centipedes-indoors rule" before they head out with their "eco-cool contraptions!”

Fact is, the Bohart Museum, located at 1124 Academic Surge on California Drive, is home to more than seven million insect specimens; a live "petting zoo" (think Madagascar hissing cockroaches and walking sticks); and a gift shop.

So if someone is bugging you about a holiday gift, check out the Bohart, either online or in person. To accommodate families who work during the week, the Bohart has scheduled a special weekend opening on Saturday, Dec. 11 from 1 to 4 p.m.  The Bohart is traditionally open on weekdays, year around, from 8:30 a.m. to noon and from 1 to 5 p.m., Monday through Thursday.

We stopped at the Bohart Museum this morning and met a future entomologist who--yes--in his childhood owned an insect collection kit.  Joel Hernandez, a UC Davis entomology major and a student assistant at the Bohart, acquired his kit at age 7. What first sparked his interest in entomology? An Animal Planet episode featuring the insects of Madagascar.

Hernandez later joined the Loma Vista 4-H Club, Ventura, and enrolled in an entomology project. His display of insects won "best of division" and "best of class" awards in the Ventura County Fair.

Hernandez now has five display cases of insects, including two cases of butterflies, one case of beetles and miscellaneous insects.

His ambition? To become an entomology professor.

Just think--somewhere out there is another "Joel" who will be getting his very own insect collection kit during the holidays--thanks to Martha.

Martha & Friends may now want to see the UC Davis Department of Entomology's video clips on "How to Make an Insect Collection." Professor James R. Carey taught the class last spring to undergraduates and graduate students. Their work can be viewed online. 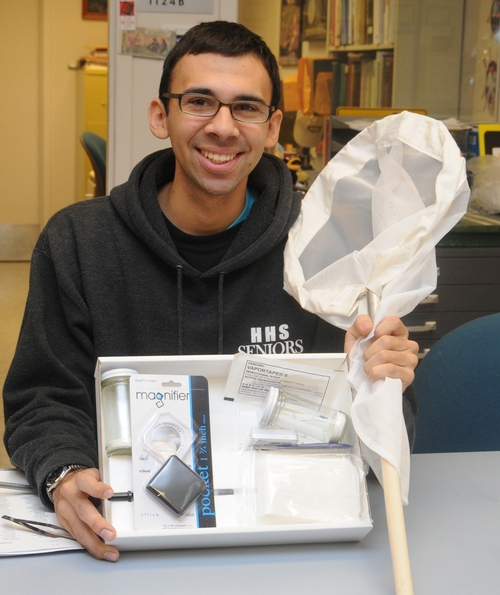