Carol and Brennen Dyer lost everything in the Camp Fire, Paradise, and Carol barely escaped with her life.
Paradise isn't.

And it will be again when it's rebuilt.

The raging inferno known as "Camp Fire" that started Nov. 8 on Camp Creek Road, near Pulga, Butte County, California, ranks as the deadliest and most destructive wildfire in the state's history.

As of today: 48 fatalities, 130,000 acres burned, and at least 8,817 structures destroyed, including almost all of what was the city of Paradise.

“Ninety-five percent of the town is gone,” Paradise council member Michael Zuccolillo told the San Francisco Chronicle in a news story published Nov. 10. “The remaining 5 percent of buildings are barely standing. I felt like I was living in a bad dream. It was unrecognizable. I had to keep asking, ‘Where are we?' All the landmarks are gone. Block by block, nothing. Anybody who had a house in Paradise probably doesn't anymore.”

"Anybody who had a house in Paradise probably doesn't anymore.”

On the UC Davis front, a couple with ties to the Bohart Museum of Entomology lost their home.

Entomologist Brennen Dyer, a specialist at the Bohart Museum, and his wife, Carol, are reeling from the tragedy.  Carol barely escaped with her life.

Dyer, who grew up in Paradise and earned a bachelor of science degree in entomology from UC Davis last spring, related that he and Carol had been renting a house there while he was attending college--first at Butte Community College, and then at UC Davis. "I was a tutor at my community college," he said, "and became one again for Lynn's entomology lab."  That would be Lynn Kimsey, director of the Bohart Museum and UC Davis professor of entomology.

It was Professor Kimsey who encouraged him to set up a gofundme page.

"Brennen and his wife Carol, lost their home in Paradise in the Camp Fire on Friday," Kimsey related. "I encouraged him to start a gofundme page to raise funds to pay for housing. Even though he's renting a room in an apartment in Davis, it's not enough room for both of them (she lived and worked in Paradise). Carol only managed to save some clothes before escaping the fire. They have no money saved due in part to student loans and will need several thousand dollars for first and last month's rent and security deposit for an apartment in Woodland."

"Also, the donation jar at the Bohart Museum (located in Room 1124 of the Academic Surge Building on Crocker Lane) will go to them and any profits from the gift shop, so come and shop," said Tabatha Yang, education and outreach coordinator. "This starts now and will go through Sunday during our open house on Urban Entomology from 1 to 4 p.m."

On the gofundme page, Brennen wrote: "It's hard for Carol and I to ask for help, but we have to. We lost our home in Paradise to the Camp Fire. Carol barely escaped with her life. My childhood home, along with the rest of my hometown, is gone. The only way forward for us is to rebuild our lives. I'm trying to find a house or duplex for rent near Davis. I only recently graduated from UC Davis and we have no savings so we can't afford to secure a new lease. We need $3000-5000 for deposit and first month's rent. I think we can get by under our own power after we have housing, but securing a place is the top priority."

The gofundme address is: https://www.gofundme.com/bandcparadisecampfire

We can do this! 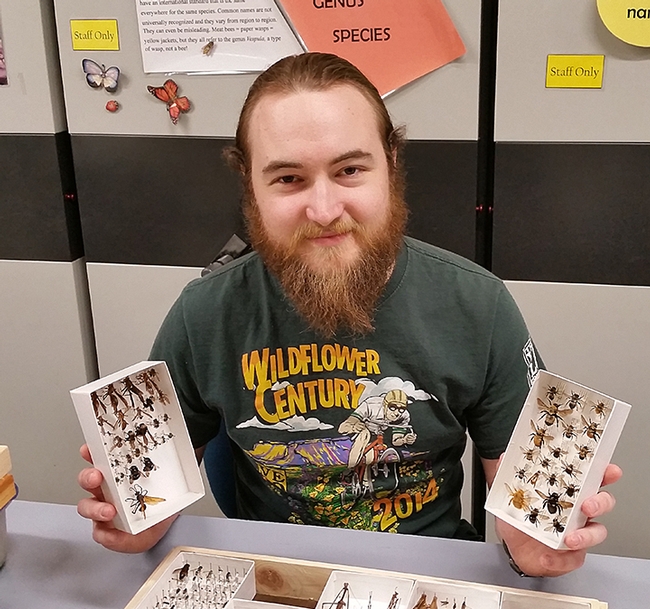 Riley Mark, 13, of Fairfield, created the image of a butterfly, and Bianca Currey, 8, of Dixon, the dragonfly. (Photo by Kathy Keatley Garvey)
Kids and bugs go well together.

Take the entries in Today's Youth Building at the 143rd annual Dixon May Fair, which opened Thursday, May 10 and continues through Sunday, May 13.

Some of the exhibitors focused on honey bees, butterflies, dragonflies, and bumble bees--and some ventured out of the insect arena and into spider territory.

And then there were all the bumble bee pillows entered by Solano County 4-H'ers. The colors and creativity came through.

Speaking of insects, if you want to see insect specimens and live insects at the Dixon May Fair, the Bohart Museum of Entomology at UC Davis will be staffing a table in the Floriculture Building on Friday, May 11 from 2 to 8 p.m., (entomologist Jeff Smith) and on Saturday, May 12 from 11 a.m. to 1 p.m. (Bohart associate Brennen Dyer, undergraduae student).  Fairgoers can not only view the insect specimens but handle and photograph the permanent residents of the live "petting zoo," which includes such insects as Madagascar hissing cockroaches and walking sticks, but also tarantulas (spiders). 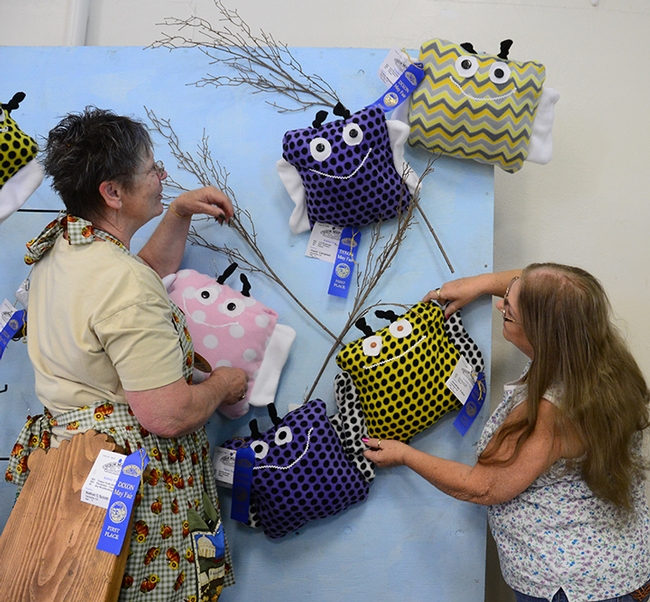 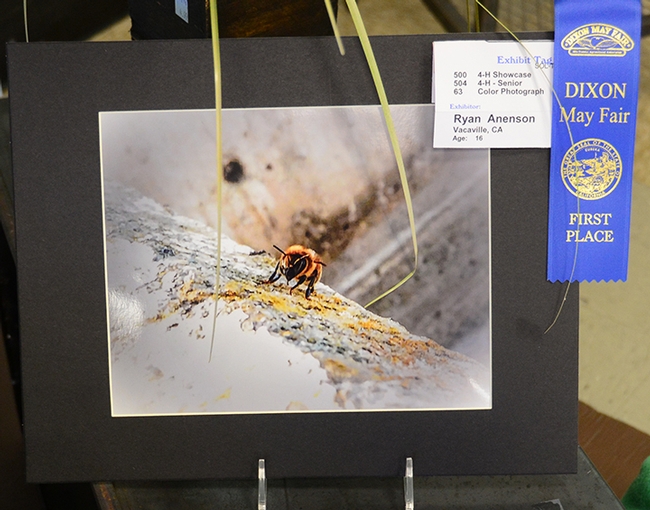 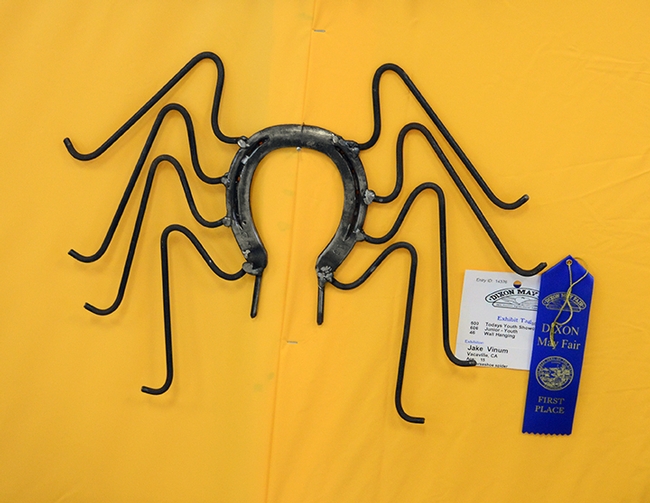 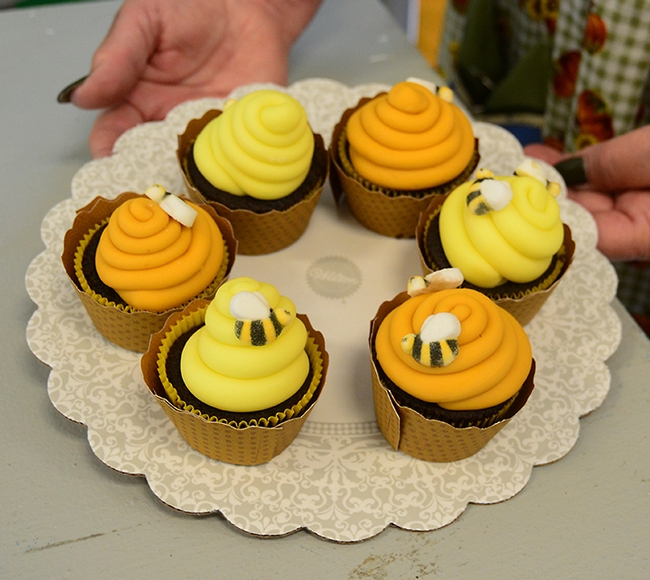 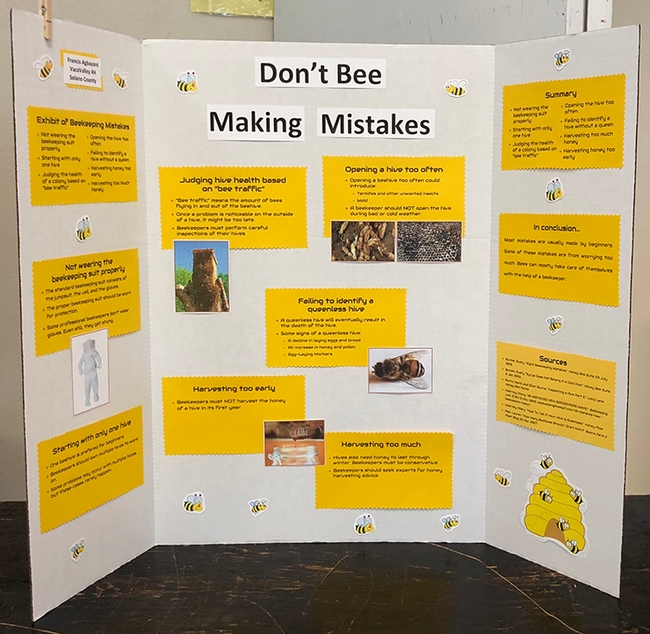