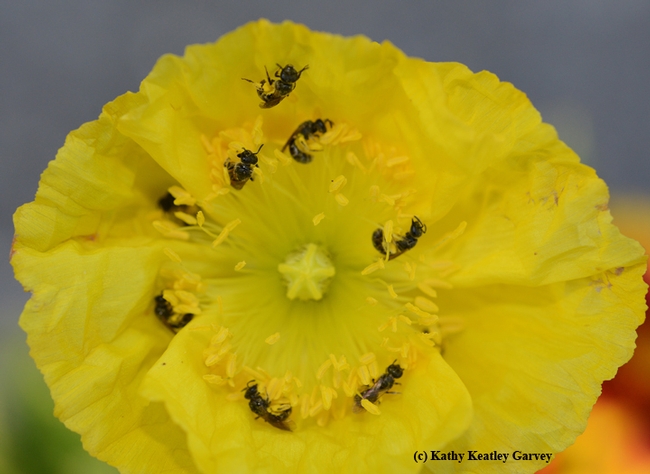 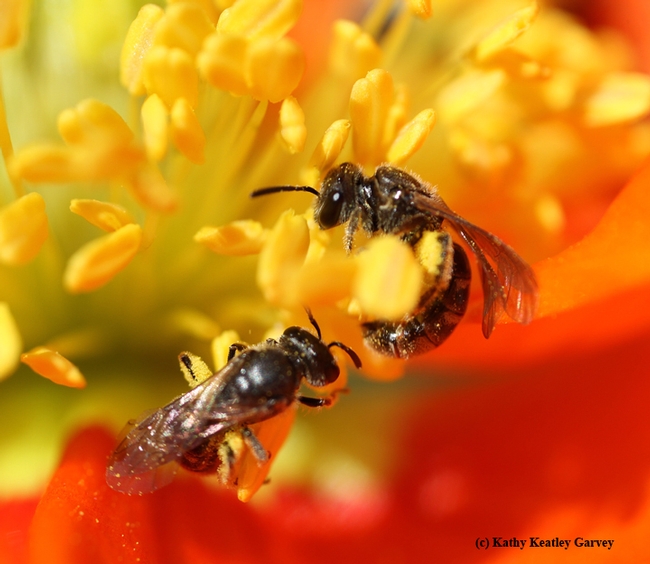 At first glance, it appeared to be a gnat circling our head.

Then it landed on our passionflower vine (Passiflora). It cooperatively stayed still for a photo (taken with a Nikon D800 mounted with a 105mm macro lens) and then returned to its nest, a hole in the ground.

A tiny bee, but what bee?

"A female sweat bee in the genus Lasioglossum, subgenus Evylaeus which are the tiny black species in this large and diverse genus," said native pollinator specialist Robbin Thorp, distinguished emeritus professor of entomology at UC Davis, who maintains an office in the Harry H. Laidlaw Jr. Honey Bee Research Facility.

Lasioglossum, found worldwide, is the largest of all bee genera, containing more than 1700 species in numerous subgenera.

Bee identification is so intricate. This little sweat bee is similar to Halictus. "Lasioglossum differ from Halictus in the position of the hair bands on the abdomen," Thorp noted. "Halictus have well defined hair bands that are at the apex (end) of each tergite.  In Lasioglossum, when hair bands are present, they are at the bases of the tergites."

Thorp is a veteran instructor at The Bee Course, affiliated with the American Natural History. An annual course held at the Southwestern Research Station, Portal, Ariz., it's offered for conservation biologists, pollination ecologists and other biologists who want to gain greater knowledge of the systematics and biology of bees, according to the organizers, Jerome Rozen Jr., American Museum of Natural History, and Ronald McGinley of Roseville.

Many UC students and faculty have attended the course, which draws participants throughout the world. This year's course runs from Aug. 22 to Sept. 1.

Want to apply to attend The Bee Course? Applications are now being sought. Check out the website for more information. 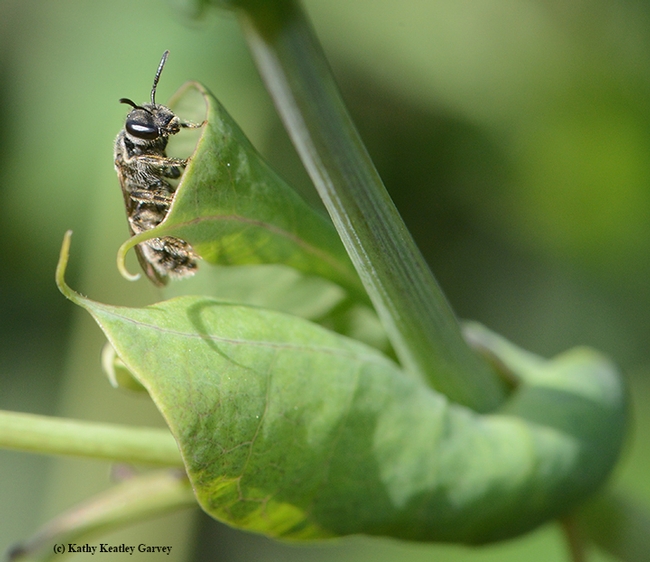 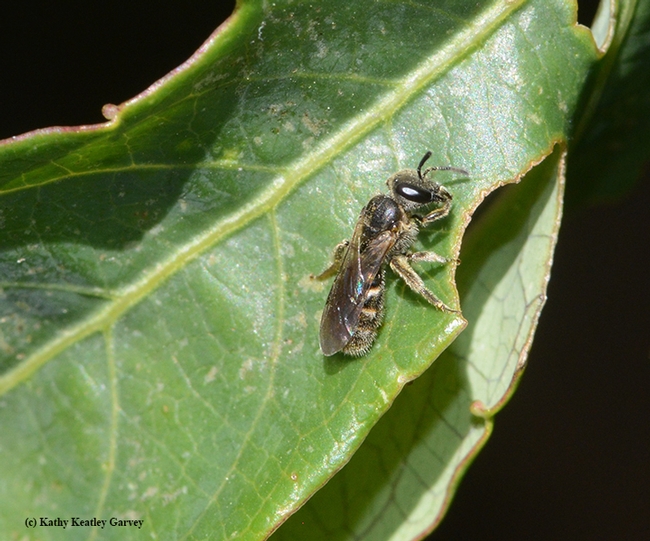 There I was, walking across the University of California, Davis, campus to the Environmental Sciences Building for an agricultural communicators' meeting: a notebook in my hand, cell phone in my pocket, and my trusty pocket camera strapped around my neck.

Sometimes it's good not to lug around a 10-pound camera.  Not this time, however.

Right inside the soybean planter box, I saw it--an assassin bug spearing what looked like a bee.

This was a predator-prey encounter between the assassin, Zelus renardii, and a bee, which native pollinator specialist Robbin Thorp, emeritus professor of entomology at UC Davis and an instructor of The Bee Course, identified as a male metallic sweat bee, Lasioglossum (Dialictus) sp., possibly L. tegulariforme.

I aimed the tiny camera and grabbed a couple of images before the predator, with prey attached, crawled beneath a soybean leaf.

Assassin bug are predators and don't distinguish between beneficial insects and pests. Still, we like them in our garden because they eat a lot of soft-bodied insect pests like aphids and leafhoppers.

Speaking of eating insects...the UC Davis Honey and Pollination Center is sponsoring a "Bugs and Beer" event on Saturday, Nov. 1 in the Robert Mondavi Institute for Wine and Food Science. It promises to be a cricket-kölsch kind of affair.

Bamford, known as "The Pope of Foam," is an icon around campus and the beer-brewing world.  He's considered one  of the country's most intriguing professors, noted Amina Harris, director of the Honey and Pollination Center. And David George Gordon--a fellow with three first names? He's been featured in the Wall Street Journal, Time magazine, and the National Georgraphic Kids.

Registration opened Monday (http://www.rmi.ucdavis.edu/events). Tickets are $50, general admission, and $25 for students. And, of course,  "Bugs and Beer" is open only to those 21 and over because beer will be served.

We don't know what kind of bugs Gordon will serve, but they probably won't be assassin bugs. Bees, maybe. Specifically, maybe that "Three-Bee Salad?" on his website? 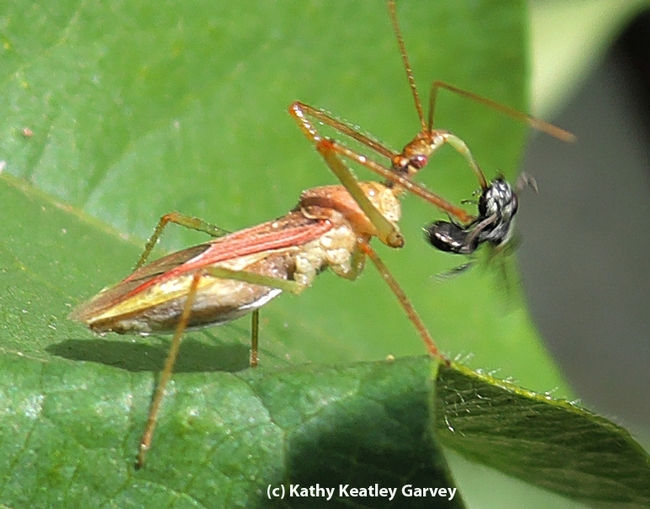 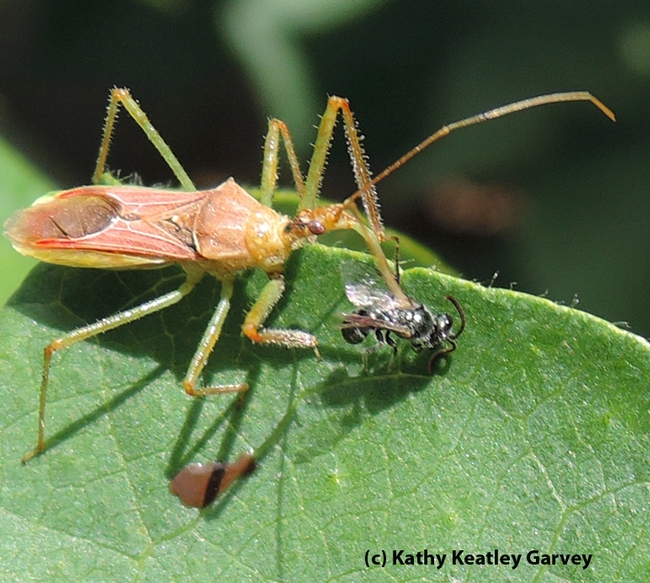 Mother's Day, insect-style, dawned like any other day. In our back yard, golden honey bees foraged in the lavender and those ever-so-tiny sweat bees visited the rock purslane.

The honey bees? Those gorgeous Italians.

The sweat bees? Genus Lasioglossum, as identified by native pollinator specialist Robbin Thorp, emeritus professor of entomology at UC Davis. He figures the female sweat bee (below) may be L. mellipes, which is brownish toward the tips of the hind legs.

A trip to Benicia yielded a photo of a ladybug chasing aphids. It was almost comical. A fat aphid appeared to be playing "King of the Hill" while other aphids sucked contentedly on plant juices, unaware of pending predators.

After all,  "stressed" spelled backwards is "desserts." 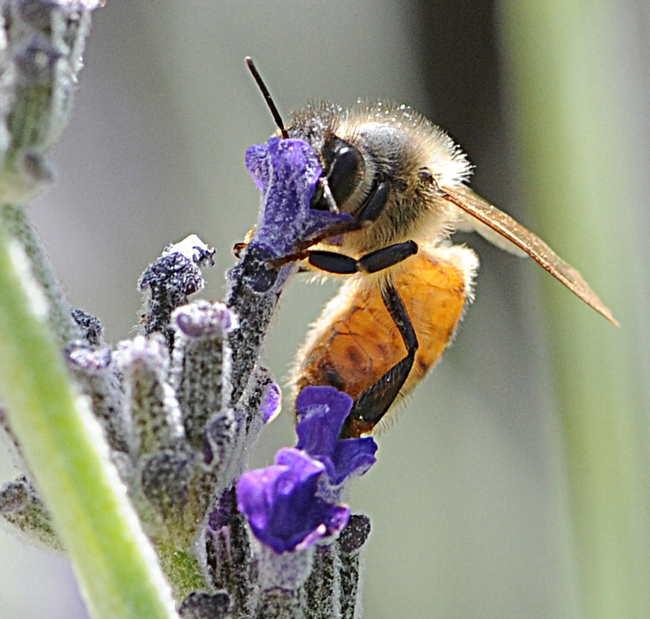 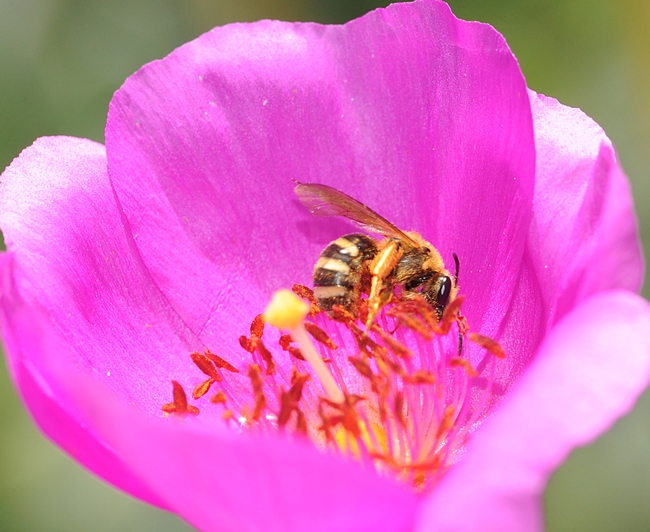 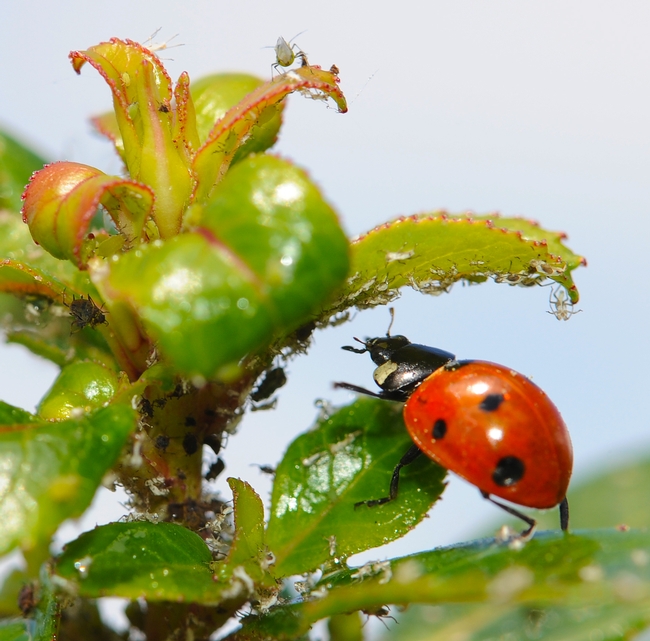 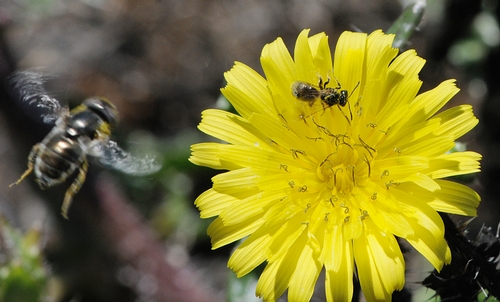 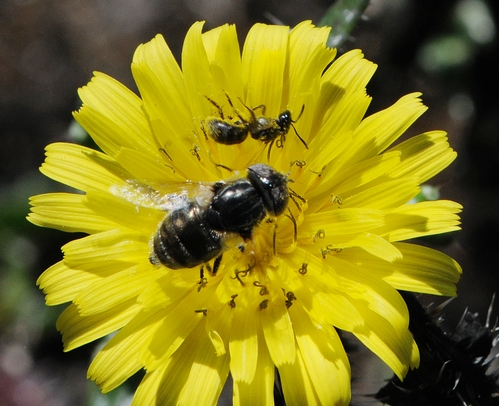 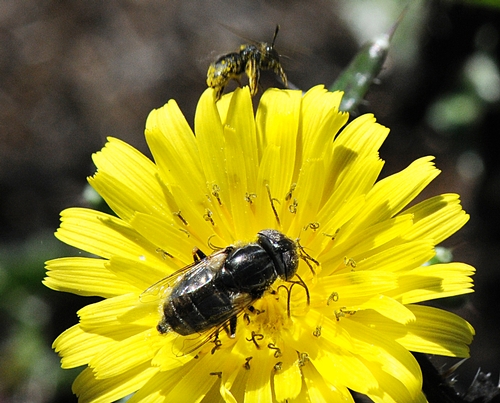 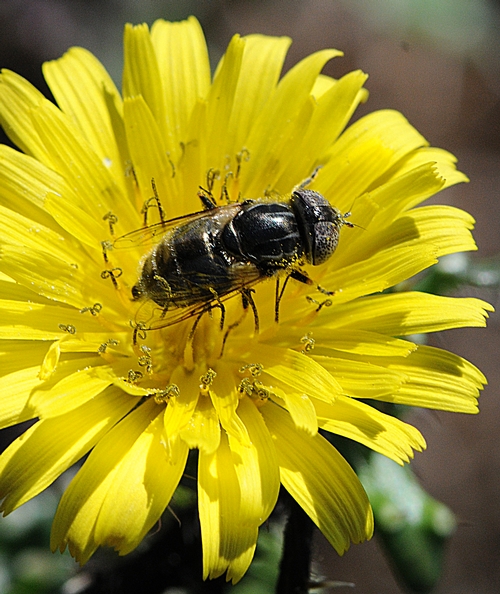