Bug Squad
sitenum=63
Happenings in the insect world
What a Load on This Bumble Bee!

It was billed as the second annual Butterfly Summit, hosted last Saturday by Annie's Annuals and Perennials in Richmond.

But a yellow-faced bumble bee, Bombus vosnesenskii, foraging on Anchusa azurea (a member of the borage family), apparently didn't like the focus on butterflies.

Butterfly Summit? How about a Bumble Bee Summit?

For several minutes, we watched this industrious bumble bee zip in and out of the Anchusa. It zig-zagged between a Delphinium Cobalt Dreams and a Linaria triornithophora, Three-Birds Flying.

With her heavy load of orange pollen, she appeared to be bogged down, perhaps too heavy to fly?

We remember National Public Radio running a piece on "Heavy Loads of Pollen May Shift Flight Plans of the Bumble Bee," which aired in August of 2015. NPR's Nell Greenfieldboyce drew attention to research by biologist Andrew Mountcastle of Harvard University, work published in the Proceedings of the National Academy of Sciences.

"Despite what you may have heard, bumble bees do not defy the laws of physics when they fly," Greenfieldboyce related.

Fact is, they just fly differently than airplanes. "They flap their wings, and their wings bend and twist as they flap them," Mountcastle told her. He said that when bumble bees carry a pollen load, rather than a nectar load, "they are more stable, but less maneuverable in flight."

Bottom line: bumble bees are very good at flying, even when they're loaded with cargo (pollen). 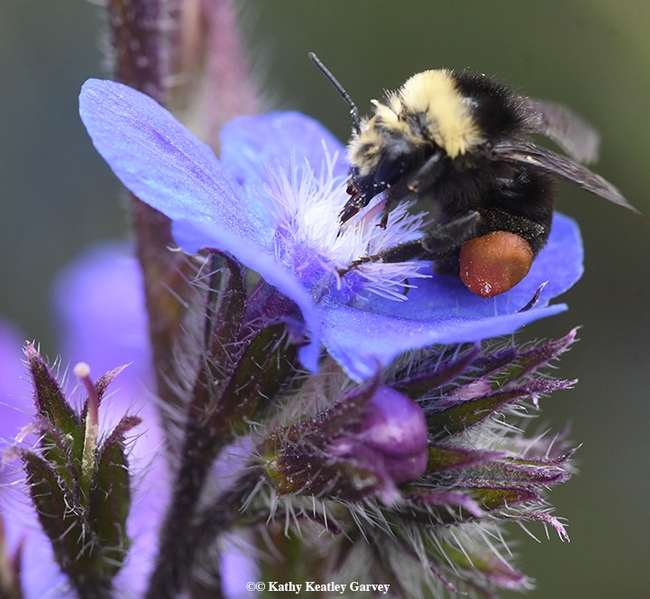 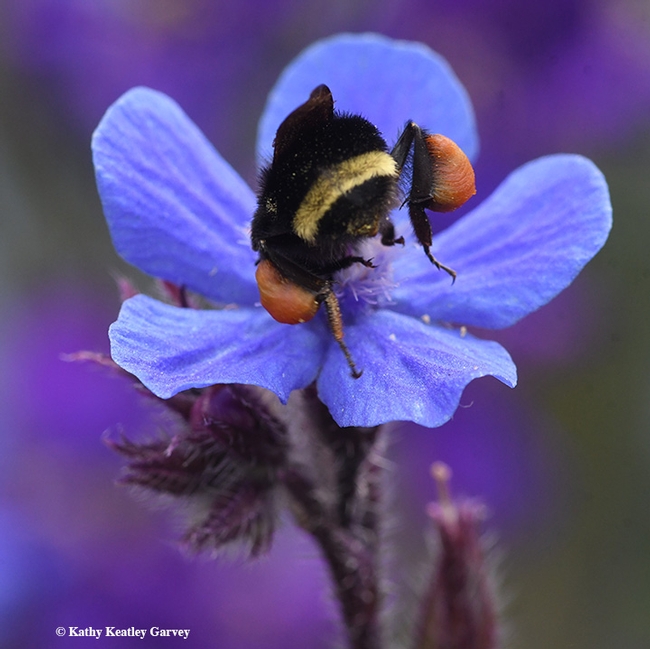 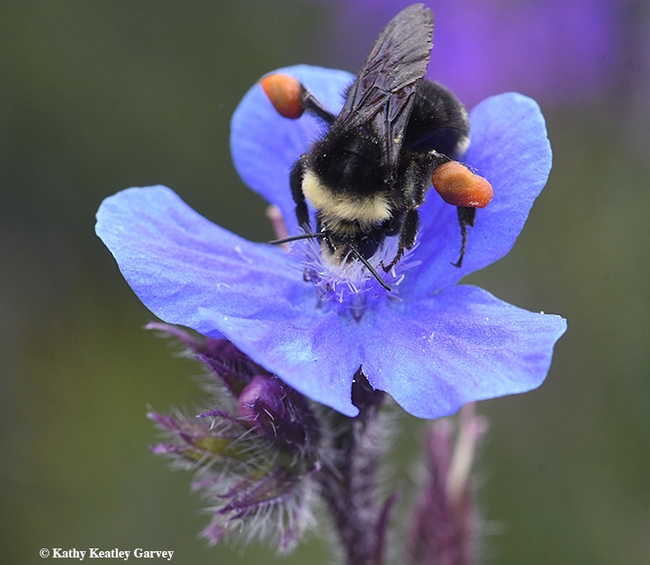 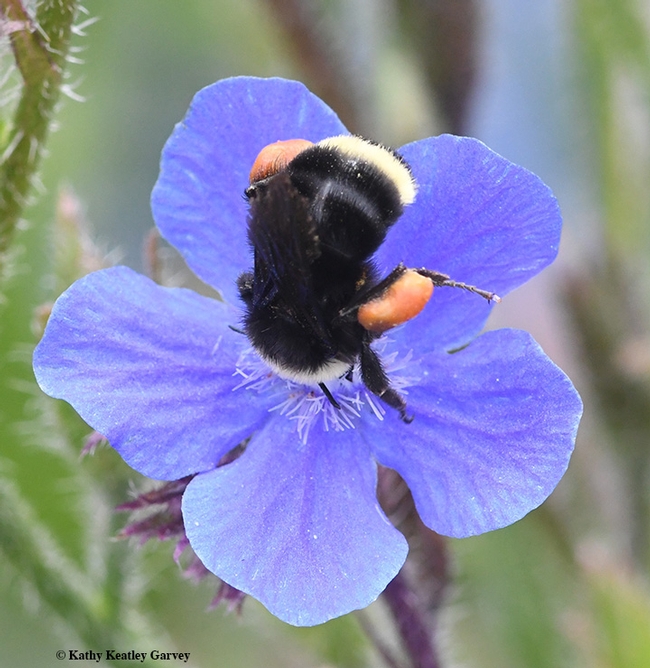 Science journalist Richard Harris
"Biomedical science was not always the hypercompetitive rat race that is has become in recent years. Consider the story of Charles Darwin, as he developed his theory of evolution through natural selection. That discovery became the organizing principle of biology. And the story of how it arose bears almost no resemblance to the way biology and medicine advance today. Darwin spent decades gathering observations and gathering his thoughts….He pored over collections of insects...”

Darwin was driven by curiosity; he didn't start out with a “coherent hypothesis,” Harris says. Plus, Darwin "had no need to hustle for money,” and "he was in no hurry to publish his discoveries.”

Today the “high pressure of competition can tempt even the best scientists into dangerous territory,” Harris warns in his 278-page book.

You can hear what Harris says about sloppy science/faulty research when he travels from his home in Washington, D.C. to the University of California, Davis, campus to deliver a Storer Lecture.

Harris will speak on “Common Errors that Bedevil Biomedical Research and How to Fix Them,” from 4:10 to 5 p.m., on Wednesday, Oct. 25 in the UC Davis Student Community Center. The event is free and open to the public. A book signing will follow the lecture.

The lectureship, established in 1960, is funded through a gift from Professor Tracy I. Storer and Dr. Ruth Risdon Storer to bring eminent biologists to the UC Davis campus. Speakers have included Nobel laureates, members of the National Academy of Science and acclaimed authors in the life sciences and medicine.

“Richard Harris has written a very important and unsettling book based on his careful investigation of the biomedical research enterprise,” said Mark Winey, distinguished professor of Molecular and Cellular Biology and dean of the College of Biological Sciences, UC Davis, who is hosting the journalist. “We can expect an intriguing and thought provoking lecture.”

In his book, Harris relates that American taxpayers spend $30 billion annually funding biomedical research. “We all rely on biomedical research for new treatments and cures,” Harris points out. “But this critical enterprise is not in the best of health itself.  Most experimental treatments fail. One reason is that the underlying research does not hold up to scrutiny. Scientists find that far too often that they are unable to repeat experiments that other researchers have carried out.”

By some estimates, half of the results from these studies can't be replicated elsewhere—the science is simply wrong, Harris asserts.

The national award-winning science journalist, who grew up in the San Francisco Bay Area, has covered science, medicine and the environment for NPR Radio since 1986. A graduate of UC Santa Cruz with a bachelor's degree in biology, he began his journalism career as a reporter for the Livermore (Calif.) Tri-Valley Herald. He later joined the San Francisco Examiner as a science writer. He is a past president of the National Association of Science Writers and the Northern California Science Writers' Association.

We just finished reading Rigor Mortis today. It's not only an eye opener, but a call to action. It's as easy to read as a well-documented and detailed newspaper investigative piece, complete with patient and researcher interviews and anecdotes. It zeroes in on “the constant scramble for research dollars” and the fact that scientists' “promotions and tenure depend on their making splashy discoveries.”  Sadly, it's often quantity over quality in the "publish-or-perish" world of academia.

Harris writes about egregious research, targeting cancer, heart disease, Lou Gehrig's disease, diabetes, and other diseases--diseases that can and do affect us all, either through taxpayer funding or personal/family/friend experiences.

Charles Darwin was in no hurry to publish his discoveries. Neither should today's researchers. We can and must do better.

(Editor's Note: The presentation will be recorded for later viewing. Joanna Chiu, associate professor and vice chair, UC Davis Department of Entomology and Nematology, is coordinating the Storer Lectureships in Life Sciences for the academic year. She may be reached at jcchiu@ucdavis.edu) 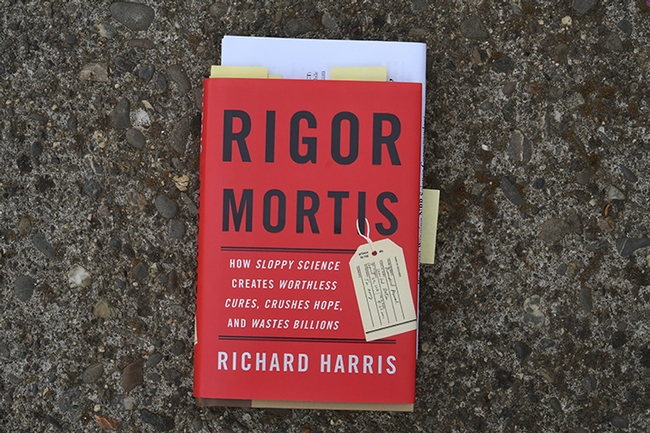 "When we try to pick out anything by itself, we find it hitched to everything else in the Universe."--John  Muir, My First Summer in the Sierra

Ecologist Louie Yang of the UC Davis Department of Entomology, tags that quote at the end of each email.

On that note, did you catch the Feb. 14th National Public Radio piece on "Why California Almonds Need North Dakota Flowers (And a Few Million Bees)?"

The gist of it:
Every year, bees from 1.6 million of the nation's hives are trucked into California to pollinate the 750,000 acres of almonds.  Since the almond pollination season is brief--a few weeks in mid-February--the bees need someplace to thrive after the bloom ends. Many  beekeepers head to North Dakota's federally funded government program, the Conservation Reserve Program, where flowers bloom all summer long. Basically, Uncle Sam leases land from the farmers to help the bees thrive.

Now, however, North Dakota farmers are finding it more profitable to grow corn than put their land in the Conservation Reserve Program.

"The amount of North Dakota land in the Conservation Reserve, meanwhile, has declined by a third over the past five years," said Charles. "This year, it's expected to take another plunge, perhaps down to half what it was its peak."

As Charles correctly pointed out: "This is not just a beekeeper's problem anymore. ...the prosperity of almond growers...depends on what happens to bees on the lonely northern Plains."

To get a really good grasp of the situation, read Hannah Nordhaus' excellent book, "The Beekeeper's Lament: How One Man and Half a Billion Honey Bees Help Feed America."

NPR interviewed some of the very migratory beekeepers that Nordhaus interviewed. 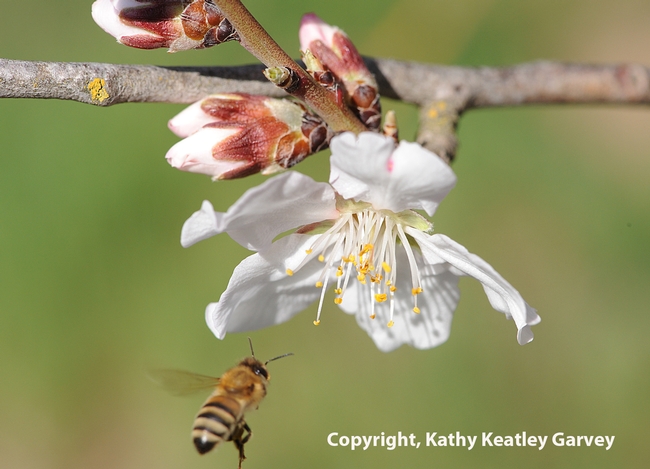 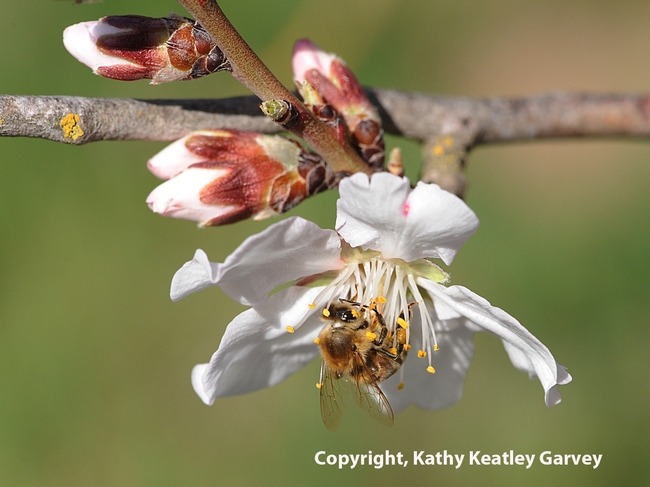