But they did when UC Davis student Hannah Trumbull, a human development major and political science minor from Albany, Calif., delivered her address at the recent UC Davis College of Agricultural and Environmental Sciences commencement.

What's a nematode, you ask?

Short answer: worms. Longer answer? “Nematodes are an amazing phylum of organisms—they exist in almost every known environment on the plant, and different species eat everything from bacteria and fungi to plant and animal tissue,” says UC Davis nematologist/parasitologist Lauren Camp, received her doctorate from UC Davis last December.

Enter Hannah Trumbull. Last winter she enrolled in a human development course on longevity taught by James R. Carey, distinguished professor of entomology at UC Davis, and a recipient of national and international teaching recognitions.

What Trumbull had to say about worms, aka flatworms, at her commencement address stirred the crowd.

“Out of all the lessons I learned at Davis, the one I am thinking about today, that I come back to again and again, is that the best I can hope for in my life is to uphold the standard of a healthy flatworm,” Trumbull told her audience.

“I took a human development course on longevity with Professor Carey last winter and one day he lectured about how to characterize nematode health as an example of lifespan measures.”

"Here are the four stages of nematode health, in order from most to least healthy, and I hope you'll see why this struck me as profound. James R. Carey, distinguished professor of entomology. (Photo by Kathy Keatley Garvey)
"For a nematode, a prod is a physical object poking it in its petri dish and motion is a squirm. For humans, a prod can be a personal or national event, a medical problem, a break-up, loss of a job or a sudden epiphany that life should be different. Motion is creation, connection, empathizing and self-actualizing through moves as small as planting seeds, or as large as supporting a loved one through finishing a college degree. But what sets us in motion, and what determines whether we move to action when prodded?

"Walking out of Haring Hall after Professor Carey's lecture, I stopped and bought a square of baklava from the Afghan Student Association bake sale and got handed about seventeen half-sheet flyers encouraging me to rush a service sorority, come to a disco dance-a-thon, volunteer at a honey bee festival and learn how to make my own shoes. I smiled at the man in all white who preaches on the quad with his dog and the guy who wears a kilt and plays celtic flute music. Young people threw frisbees, climbed trees, and played guitar, and I knew that if I went up to any of them I would be welcome to join in. This university is a massive petri dish with as many opportunities for motion as you have hours in your day. The difference between a Class B and a Class C nematode is whether we choose to respond. A nematode display by the UC Davis Department of Entomology and Nematology at a campuswide Picnic Day. (Photo by Kathy Keatley Garvey)
"We are Class A nematodes when we move every time we are able and every time it is right. Constant motion is a requisite of collective responsibility. When one person experiences injustice, who is obligated to move with them? One of my biggest passions in college has been communal living. At the Multifaith Living Community, I compared my own European Jewish recipe for hummus with my Arab Muslim housemates in an argument that ended with the agreement that Whole Foods spinach hummus was an affront to everyone in the room.

"When a swastika was spray-painted near campus that year, those same community members were at my door with flowers and hugs checking in on me and asking how they could help. When the Davis mosque was attacked in a hate crime this year, I was immediately at their doors with all the support I could give. Communities set us into motion by propelling us outside of our own petri dishes and respond to the ways that other people are prodded. As a textbook Class A nematode once told me: 'the name of the game is do your best every single time and never stop.' The hard part, and the empowering part, is that from here on out the rules of the game are open to interpretation.

"Nematodes do not undergo somatic cell division, so they only ever have 159 cells. In contrast, millions of the cells in your body have divided, died, and been replaced since we entered this room today. How lucky are we to have the chance to recreate ourselves, in these constantly moving bodies? Entering this new stage of our lives, we must be cognizant of the threat of stillness. It is easy to become jaded and apathetic Class C nematodes who do not even move when prodded. Say yes to constant motion, take the hand of the opportunities for creation around you and in your future. College has taught me that hard work pays off, as does intelligence, but most of all it pays off to keep moving. To do your best every time. As we move into the next stage of our lives, I encourage each of you to take what you have learned in the course of your journey, and find how it can motivate necessary motion, widely, constantly and to the best of your ability. Thank you."

At UC Davis, Trumbull served as a board member of Challah for Hunger, program leader at the Multifaith Living Community, program staff at YMCA Youth and Government, and a recreation leader for the City of Davis. She lived at the Turtle House, a cooperative living house where she published magazines of student art and operated a “Taco Trike” that raised money for Planned Parenthood.

Career plans? Trumbull draws inspiration from her mother, a kindergarten teacher, to go into public education policy, and her father, a general contractor and small business owner, "to try to one day build an intentional living community." Next step: working at the Bay Area nonprofit Rising Sun. 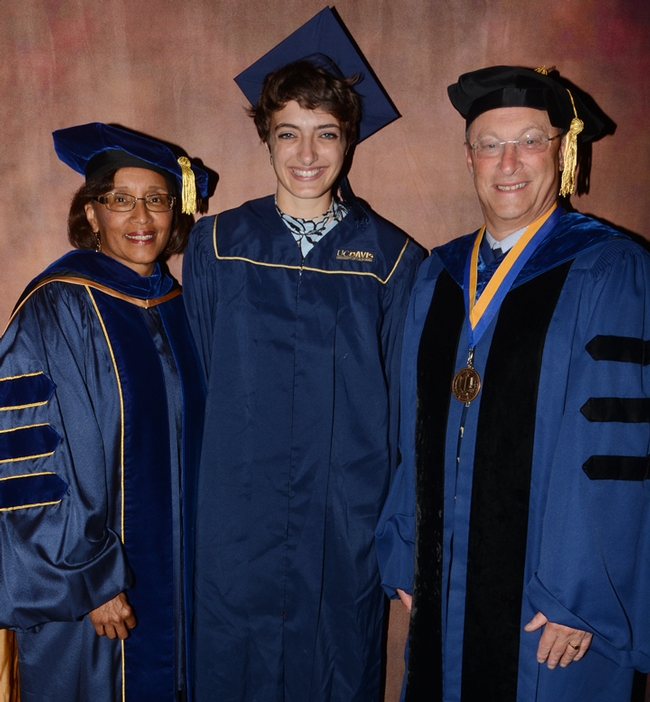