Art Shapiro of UC Davis
The public tends to blame habitat loss and pesticides for the declining butterfly populations in the Western United States.

But climate change, aka global warming, may be an equal, if not more, of a factor.

So indicates a 10-member team of scientists, including UC Davis distinguished professor Art Shapiro, Department of Evolution and Ecology, in the March 4th Science journal.

The research article, "Fewer Butterflies Seen by Community Scientists Across the Warming and Drying Landscapes of the American West," sounds a crucial alarm, alerting us to try to find new ways of protecting our fluttering friends.

"Uncertainty remains regarding the role of anthropogenic climate change in declining insect populations, partly because our understanding of biotic response to climate is often complicated by habitat loss and degradation among other compounding stressors. We addressed this challenge by integrating expert and community scientist datasets that include decades of monitoring across more than 70 locations spanning the western United States. We found a 1.6% annual reduction in the number of individual butterflies observed over the past four decades, associated in particular with warming during fall months. The pervasive declines that we report advance our understanding of climate change impacts and suggest that a new approach is needed for butterfly conservation in the region, focused on suites of species with shared habitat or host associations." Matt Forister of the University of Nevada
Writer Elizabeth Pennisi, in her article in sciencemag.org, provides this quote from Jessica Ware, an American Museum of Natural History entomologist (she was not involved in the study): “If humans don't take dramatic steps to curb global warming, entire ecosystems could disappear, with untold impacts on biodiversity and human health."

As Pennisi points out, "butterflies are at risk in open spaces, too." She writes: "Art Shapiro, an insect ecologist at the University of California, Davis, and colleagues have shown that over the past 35 years, butterflies are disappearing even in pristine protected areas such as the Sierra Nevada mountain range in the western United States."

"To see whether that finding held up elsewhere, Shapiro and Matthew Forister, an insect ecologist at the University of Nevada, Reno, gathered data from the North American Butterfly Association, which has coordinated community scientist butterfly counts across the United States for more than 42 years. The duo also incorporated 15 years of data from iNaturalist, a web portal that collects sightings of plants and animals, including butterflies. In all, the researchers tracked the fates of 450 butterfly species from 70 locations in the western United States."

The research indicates that the butterfly population in the Western United States has decreased an average of 1.6% per year between 1977 and 2018.  "Fifty species declined in at least two of the data sets used, including the Edith's checkerspot (Euphydryas editha), the rural skipper (Ochlodes agricola), and the great copper (Lycaena xanthoides)," Pennisi wrote.

The researchers warn that some species may completely disappear from parts of their ranges in the coming decades, as fall temperatures continue to align with or exceed summer temperatures, impacting breeding cycles and plant dependence. "Monarchs are in trouble in California--but they're hardly alone," Shapiro told the attendees.  "If we act as if this is a 'Monarch problem,' we're in danger of missing the real causes of Monarch decline--factors acting at a much broader scale. We've been monitoring entire butterfly faunas--over 150 species--along a transect across California since 1972. Our monitoring sites are matched with climatological data, allowing us to examine statistical relations between climate and butterfly trends. Based on this data set, our group was the first to document and publish evidence of monarch decline here. That's the only reason I'm here."

"At low elevations—below 1000'—entire butterfly faunas have been in long-term decline. We published several papers showing that these declines were about equally correlated with land-use changes and pesticide (especially neonicotinoid) use, with climate change a significant factor but much less important. Remember, these are correlations, not necessarily demonstrations of causation—but they are strongly suggestive. Monarchs were just one of many species going downhill; three once-common species (the Large Marble, Field Crescent and “Common” Sooty-wing) had already gone regionally extinct or nearly so, with others threatening to follow suit." 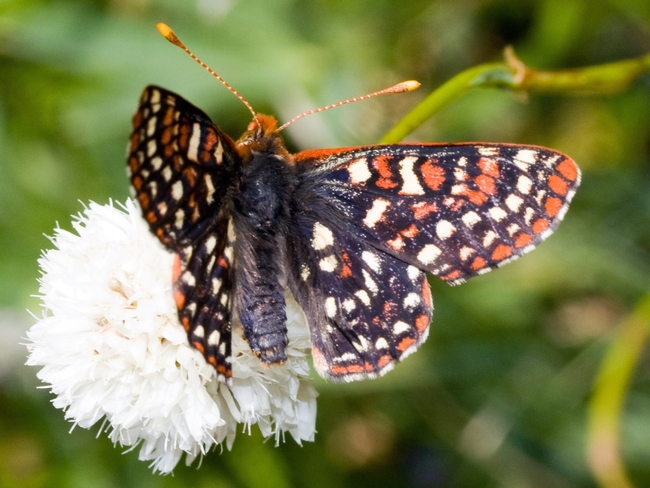 Edith’s checkerspot (Euphydryas editha) is one of the species declining in at least two datasets quoted in the Science publication. (Photo courtesy of Walter Siegmund, Wikipedia) 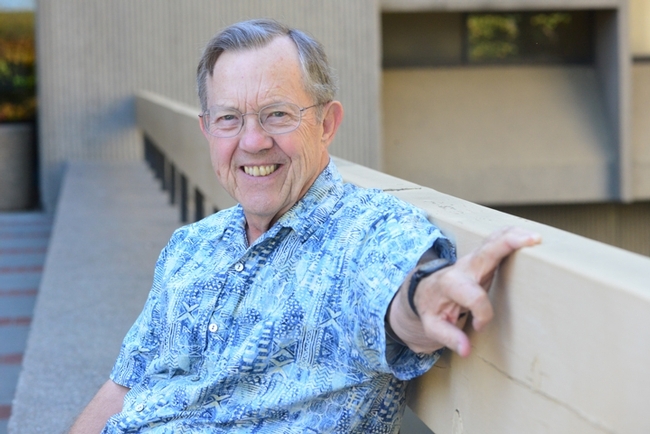 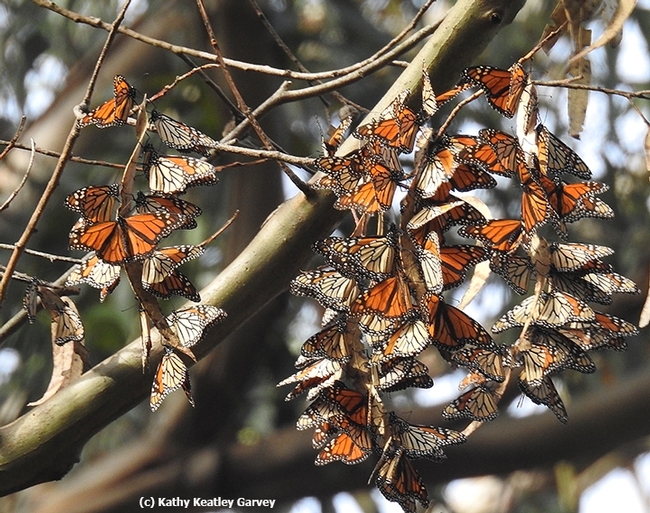 Page, emeritus professor of entomology at UC Davis and now founding director of the School of Life Sciences at Arizona State University, and his collaborator Gro Amdam, are featured in the Oct. 23rd edition of Science, a publication of the American Association for the Advancement of Science.

Writing in the behavior ecology section in an article headlined, "Sex and Social Structure," journalist Elizabeth Pennisi related that the scientists' research "has shown that reproductive traits help shape a honey bee worker's role in life and that ovaries are active players in the process-even if they play little role in reproduction in worker bees."

The specialized tasks "have their basis in what Amdam and Page call a reproductive ground plan," she wrote. Their work has provided a framework and tools to study division of labor, which now "converges on two genes that may explain both ovary size and behavior."

Page and Amdam, an associate professor in the School of Life Sciences and Norwegian University of Life Sciences, believe that genes and hormones likely control social roles as well as longevity.

Their research centers on the role of the ovary in honey bee colonies, and how the worker bees partition the labor of the colony with duties that include rearing young bees, constructing the nest, foraging for pollen and nectar, and processing the food.

Page, a pioneer in the field of evolutionary genetics and social behavior of bees, has long marveled at how highly social bees are. Worker bees, or infertile females, instinctively divide up their roles to run the hive, freeing the queen to lay eggs.

But why are some colonies high-pollen collectors and hoarders, while others aren't?

As Page told us: "The reproductive ground plan research is integrating developmental biology into insect sociobiology. It is completing the synthesis by looking for the signatures of levels of selection above the organism, at the level of the genes, physiology, and embryogenesis. It is substantiating the superorganism."

UC Davis is the hub for the development and maintenance of the high and low pollen hoarding strains of bees "that have been fundamental in testing the reproductive ground plan hypothesis and understanding how selection on colonies affects different levels of biological organization from genes to societies," he said.

Page, who received his doctorate in entomology from UC Davis, retired from UC Davis in 2004 to develop the School of Life Sciences in the College of Liberal Arts and Sciences at Arizona State University. 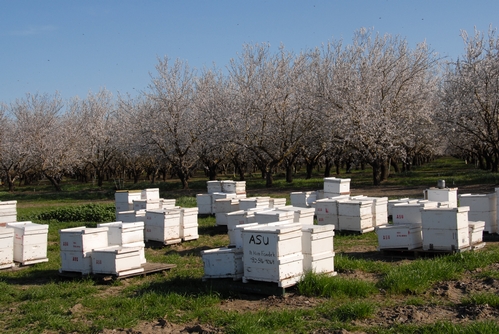 Hives of International Interest
BEES in these hives are part of the Robert E. Page Jr. honey bee research program at UC Davis. This photo was taken in a Dixon, Calif. almond orchard. (Photo by Kathy Keatley Garvey) 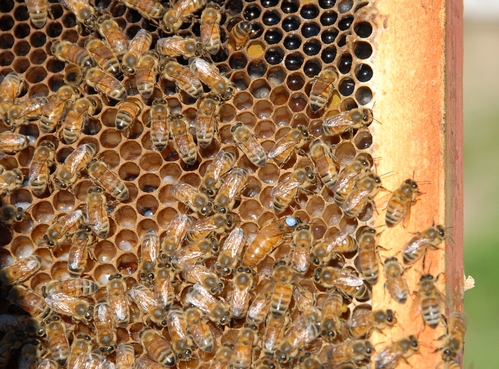