The Bohart Museum theme focused on "Where the Sun Doesn't Shine." (Photo by Kathy Keatley Garvey)
They came. They saw. They bugged out.

Who wouldn't, when you get an opportunity to pet a rose-haired tarantula named Snuggles, guide walking sticks "strolling" on your arm, or cradle a Madagascar hissing cockroach? Or marvel at the display of Platypsyllus castoris, an ectoparasite of beavers?

That's what awaited the 2000 visitors at the Bohart Museum of Entomology during the 104th annual UC Davis Picnic Day last Saturday, April 18.

Although the theme of the campuswide Picnic Day spanned "Where the Sun Shines," Bohart Museum officials focused on "Where the Sun Doesn't Shine."  They highlighted nocturnal insects, cave-dwelling insects, and parasites, including a beetle, Platypsyllus castoris, found on the south end of a beaver.

Lynn Kimsey, director of the Bohart and professor of entomology at UC Davis, kept busy answering questions about the beaver display--a pelt, and a graphic of the beetle.

As Bohart Museum associate and undergraduate entomology student Wade Spencer said: "These beetles look like they are to fleas what halibut are to other fishes. Instead of the lateral compression fleas exhibit, Platyspyllus castoris are dorso-ventrally flattened, which only adds to their alien appearance. Their unique feeding and lodging preferences have given us so many good laughs, we wanted to make them the star of this year's picnic day event at the Bohart." Pinole resident Jesse Meyers, a UC Davis alumnus (1989, chemical engineering) holds a stick insect, also known as a walking stick. (Photo by Kathy Keatley Garvey)
"To be a tad more descriptive," Spencer said, "they call the beaver's perianal region home; they help keep the beavers clean both inside AND out by feeding on dead skin, secretions of the castor glands (where "natural" and "raspberry" flavorings come from), and if they are in the mood, they'll indulge in a little blood or fluids from oozing wounds. They're basically like crawling, itchy, toilet paper that occasionally bites and you can never scratch off!"

Entomologist Jeff Smith, who curates the butterfly and moth collection at the Bohart, kept busy encouraging visitors to get acquainted with Snuggles.  They held him, petted him and photographed him. Little Teddy Owens, 2 of Davis, held by his mother, Dina, high-fived Snuggles.

Another display featured scorpions: graduate student Charlotte Herbert shone a black light on them to illustrate how they glow in the dark. All scorpions fluoresce in ultraviolet light. 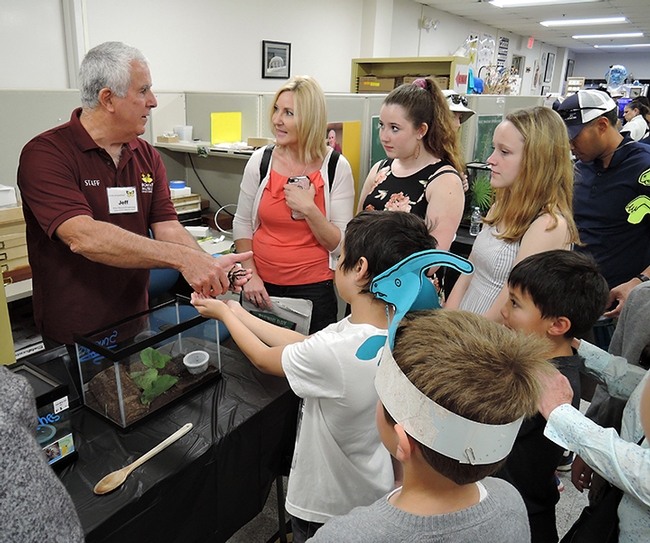 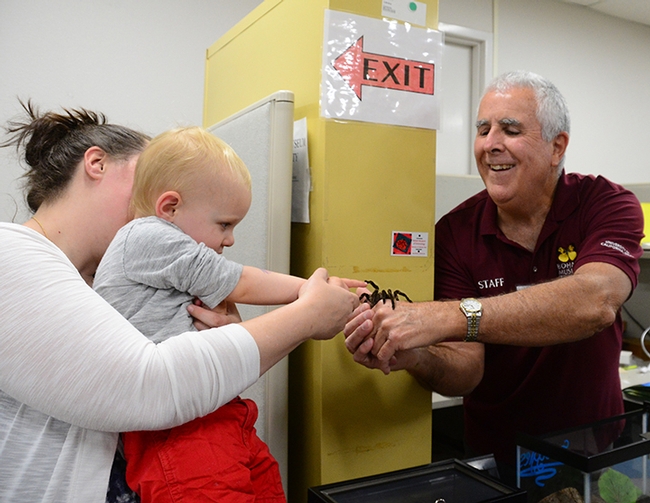 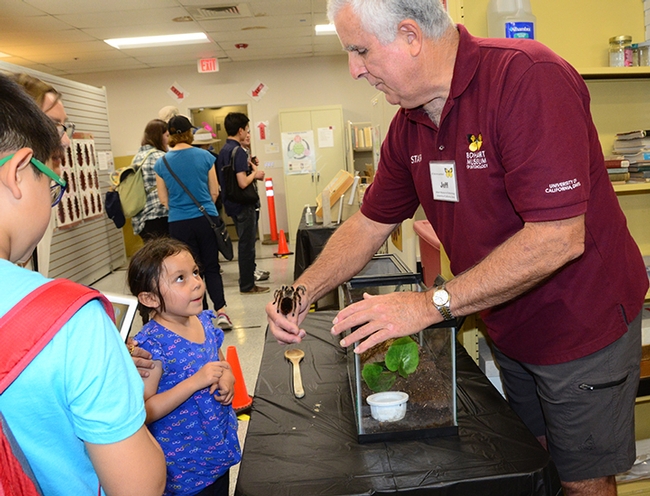 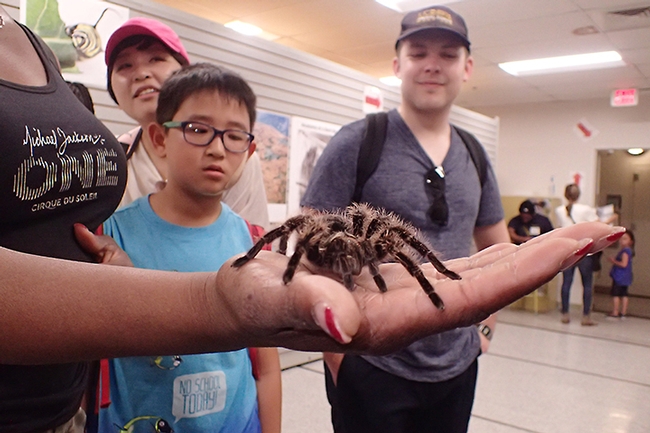 Quite a handful! Visitors at the Bohart Museum of Entomology's open house on Picnic Day watch Snuggles, a rose-haired tarantula. (Photo by Kathy Keatley Garvey) 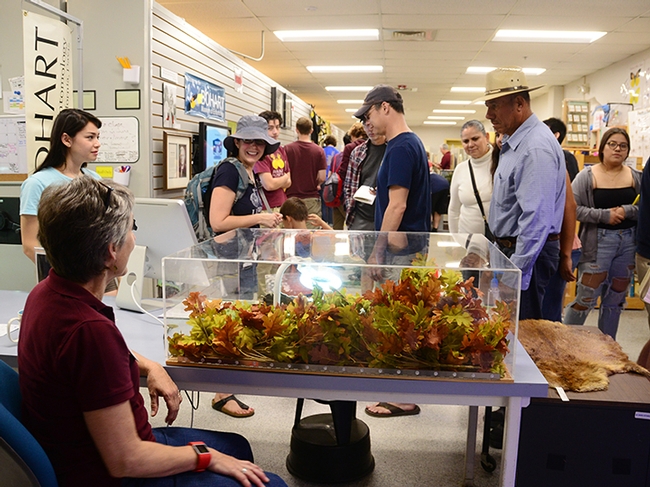 Visitors check out the beaver/beetle display at the Bohart Museum of Entomology. In the foreground is Lynn Kimsey, museum director and UC Davis professor. At far left is undergraduate student Ivana Satre. (Photo by Kathy Keatley Garvey) 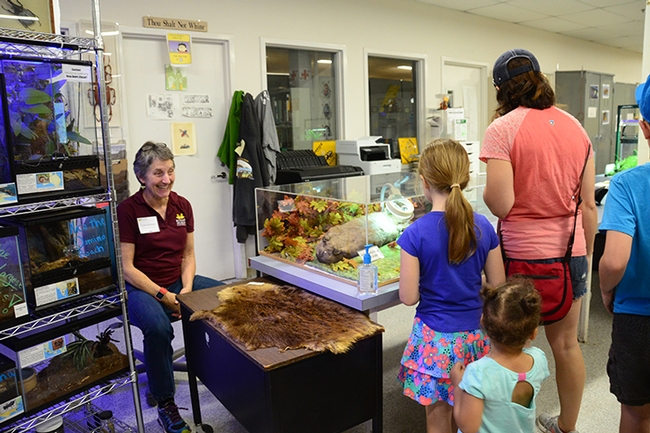 Bohart Museum director Lynn Kimsey smiles at the reaction of visitors to the beaver/beetle display. (Photo by Kathy Keatley Garvey) 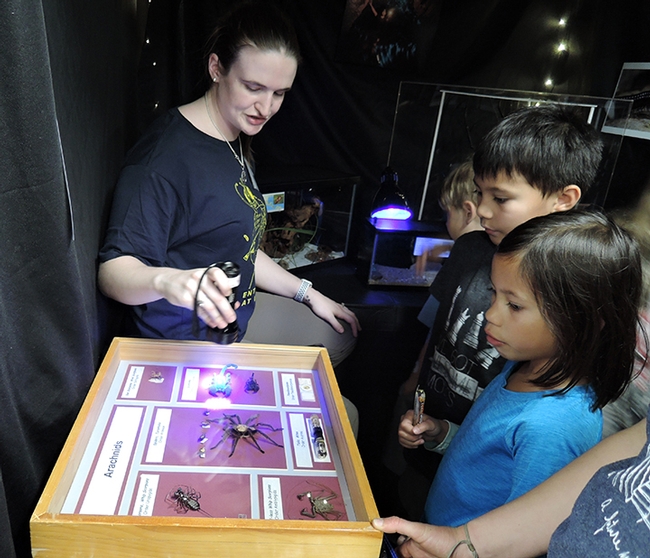