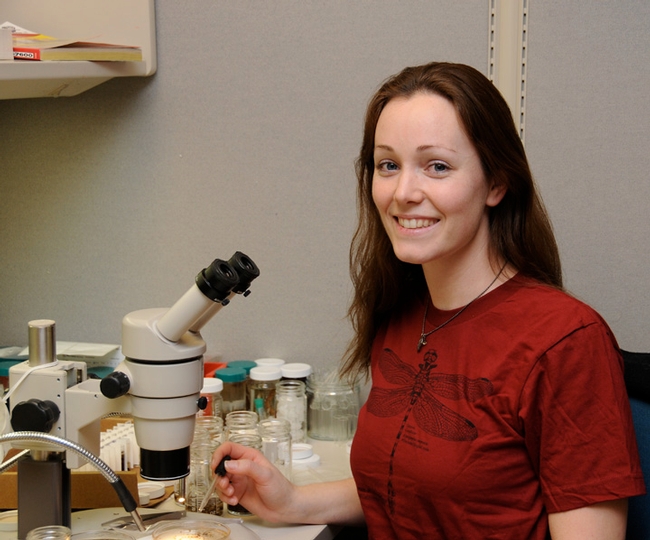 UC Davis forensic entomologist Robert Kimsey is a genius, to be sure. Show him a fly and he'll tell you exactly what it is and what it's all about.

I shot this photo at the Harry H. Laidlaw Jr. Honey Bee Research Facility at UC Davis. The honey bee looked huge and the fly, tiny. There they were together. (Ah, if you let your imagination run wild, there's a children's book there! Once upon a time, a bee and a fly...)

The fly is a minute black scavenger fly (Scatopsidae). You see these flies around decomposing matter (in this case, dead bees). After all, worker bees live only four to six weeks in the summer. During that time, they encounter all sorts of killers, such as diseases, pesticides, parasites, stress, climate change, intruders, and the mysterious colony collapse disorder).

Kimsey, an adjunct professor in the UC Davis Department of Entomology, is known for not only his expertise on flies and his courtroom testimony, but his award-winning teaching.  I'm not sure which is the most popular: the CSI television series or Kimsey's classes. (My bet: his classes!)

Wife Lynn Kimsey, a  fellow entomologist, chairs the UC Davis Department of Entomology and directs the Bohart Museum of Entomology.

When I visited a local farmers' market in late September, a UC Davis animal science major mentioned how much she enjoyed his class. "Kimsey, that's it!" she said. "Dr. Kimsey. He's really good."