Bug Squad
sitenum=63
Happenings in the insect world
'A' Is for Arthropods, 'B' Is for Biodiversity Museum Day Show me your hands! Especially if they are showcasing insects! Insect enthusiast and Bohart Museum of Entomology volunteer James Heydon obliges during the UC Davis Biodiversity Museum Day. (Photo by Kathy Keatley Garvey)
If you attended the 11th annual UC Davis Biodiversity Museum Day last Sunday, March 6 in the UC Davis Conference Room or took a side trip to the Bohart Museum of Entomology, you may have gone home humming "A" is for arthropods.

Or "B" is for Biodiversity Museum Day.

You, no doubt, saw the stick insects, Madagascar hissing cockroaches and millipedes. And you may have handled them. Scores of children--and many  adults--asked to touch or hold them.

The Bohart Museum, directed by Lynn Kimsey, UC Davis distinguished professor of entomology, shared a booth at the Conference Center with the laboratory of Jason Bond,  who is the Evert and Marion Schlinger Endowed Chair in Insect Systematics, UC Davis Department of Entomology and Nematology, and associate dean, College of Agricultural and Environmental Sciences. Arthropods from the Bond lab also included a scorpion and a trapdoor spider. The Bohart displayed a number of specimens, including the state insect, the California dogface butterfly, and the Asian giant hornet (nicknamed "murder hornet" by the news media.)

Some 1300 visitors checked out the displays, staffed by scientists from 11 museums or collections on campus:

This was the first year the free, science-based event has been held exposition-style in one facility. A special feature: side trips to several of the museums or collections. 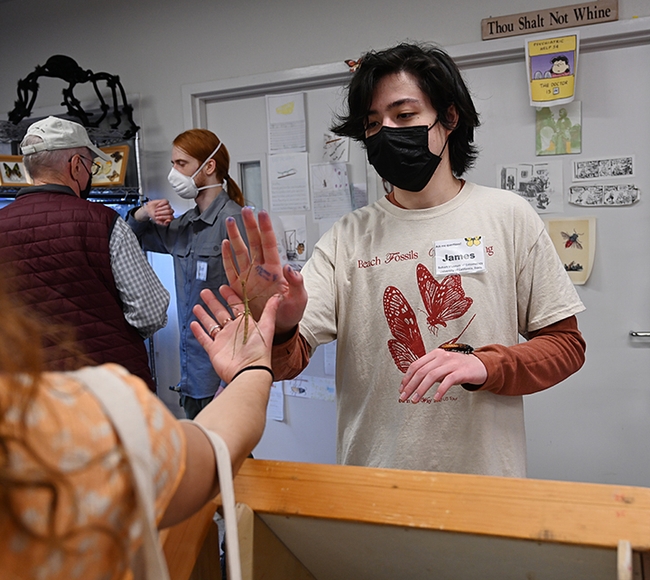 Insect enthusiast James Heydon (front) and scientist Ben Maples (back), a UC Davis entomology graduate who works at the California Department of Food and Agriculture, show insects at the Bohart Museum of Entomology on Sunday, March 6 during the 11th annual UC Davis Biodiversity Museum Day. (Photo by Kathy Keatley Garvey) 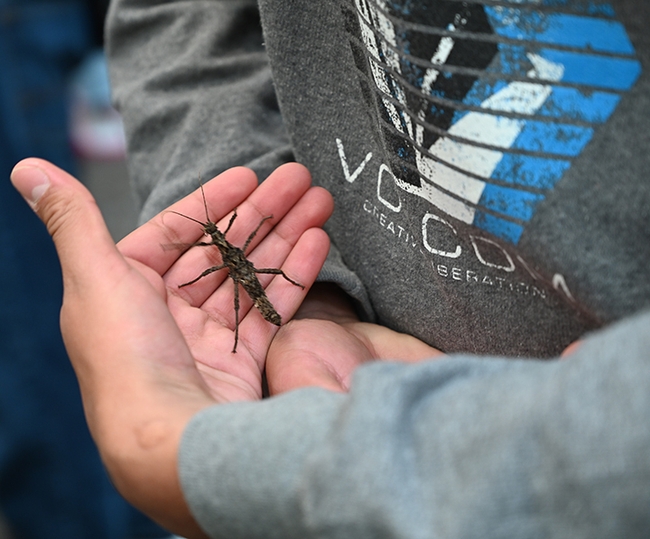 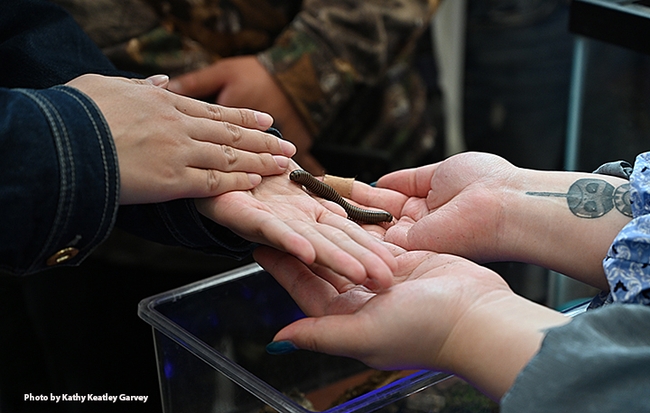 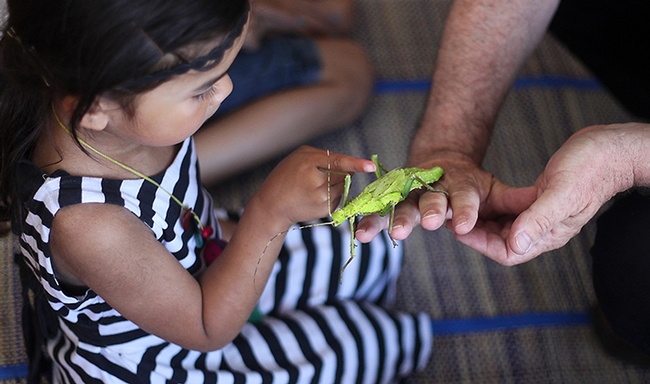 Bees from the UC Davis bee observation hive. (Photo by Kathy Keatley Garvey)
Like bugs? Thinking about becoming an entomologist or just want some hands-on experience?

The Bohart Museum of Entomology on the UC Davis campus is planning an open house on "How to Be an Entomologist" from 1 to 4 p.m., Saturday, Sept. 27. The insect museum is located in Room 1124 of the Academic Surge building, Crocker Lane, off LaRue Road.

The event is free and open to the public and is family friendly. This is the first of nine open houses during the 2014-15 academic year.

"We will have a pinning and butterfly and moth spreading ongoing workshop with Jeff Smith and tips on how to rear insects," said Tabatha Yang, the Bohart Museum's education and outreach coordinator. Smith, an entomologist in Sacramento, is a longtime donor and volunteer at the Bohart.

The Johnson lab will provide a bee observation hive, and Cindy Preto of the Zalom lab will be sharing her research on leafhoppers. The Carey lab will show student-produced videos, including how to make an insect collection, and one-minute entomology presentations (students showcasing an insect in one minute). The Ward lab will be involved in outside activities, demonstrating how to collect ants. Entomology students will be on hand to show visitors how to use collecting devices, including nets, pitfall traps and yellow pans.

Other entomologists may also participate. "There will be a lot going on inside the Bohart and outside the Bohart," Yang said. "It will be very hands-on."

The Bohart Museum, founded by noted entomologist Richard M. Bohart (1913-2007),  houses a global collection of nearly eight million specimens and boasts the seventh largest insect collection in North America. It also houses the California Insect Survey, a storehouse of the insect biodiversity.  The Bohart Museum's regular hours are from 9 a.m. to noon and 1 to 5 p.m. Mondays through Thursdays. The museum is closed to the public on Fridays and on major holidays. Admission is free.

Special attractions include a “live” petting zoo, featuring Madagascar hissing cockroaches,  walking sticks and tarantulas. Visitors are invited to hold the insects and photograph them. The newest residents of the petting zoo are Texas Gold-Banded millipedes, Orthoporus ornatus, which are native to many of the southwestern United States, including Texas.

“They're a great addition to the museum's petting zoo,” Kimsey said. “They are very gentle and great for demonstrations of how millipedes walk and how they differ from centipedes.”

Millipede enthusiast Evan White, who does design and communications for the Robert Mondavi Institute for Wine and Food Science, and is a frequent presenter at the Bohart's open houses, recently obtained the arthropods from a collector in Texas.  “Texas Gold-Banded millipedes are naive to many of the Southwestern United States, not just Texas,” he said.

Contrary to popular belief, millipedes are not dangerous. “There is much public confusion about the difference between millipedes and centipedes--not because the two look similar, but because the terms are used interchangeably when not connected to a visual,” White said.

He described millipedes as non-venomous, and relatively slow moving, with cylindrical bodies, two pairs of legs per body segment, and herbivorous. “In fact, they are more like decomposers – they do well on rotting vegetation, wood, etc.--the scientific word for is ‘detritivore.' Most millipedes are toxic if consumed, some even secrete a type of cyanide when distressed. The point being:  don't lick one.”

In contract, centipedes are venomous, fast-moving insects with large, formidable fangs, and one pair of legs per body segment. “They are highly carnivorous, although some will eat bananas. Go figure. And they are often high-strung and aggressive if provoked.” 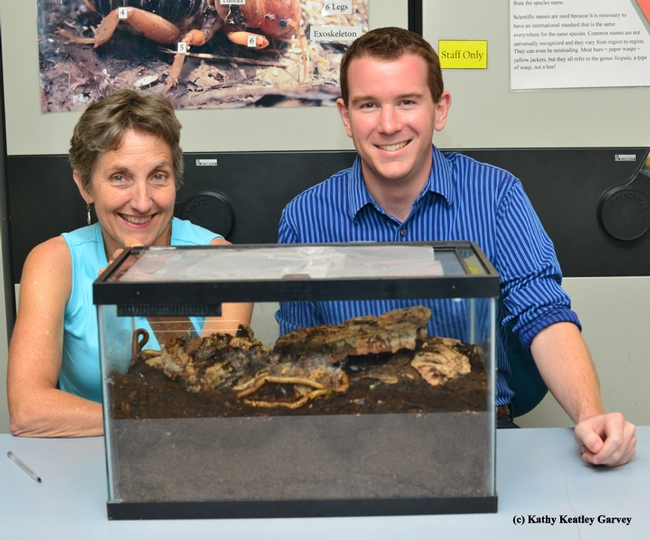 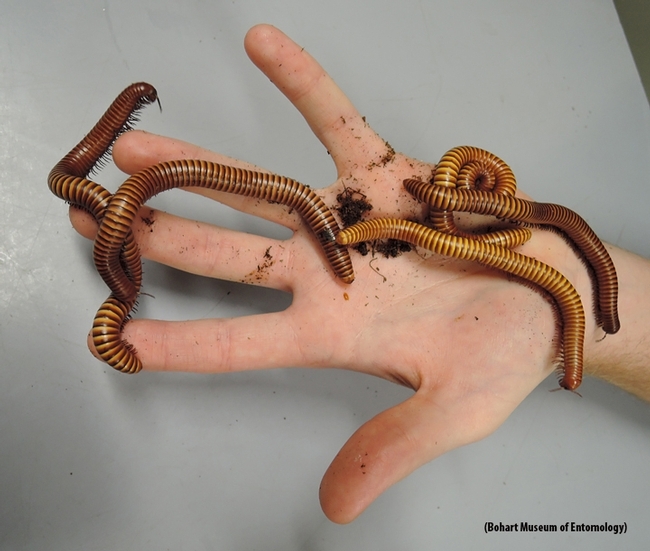 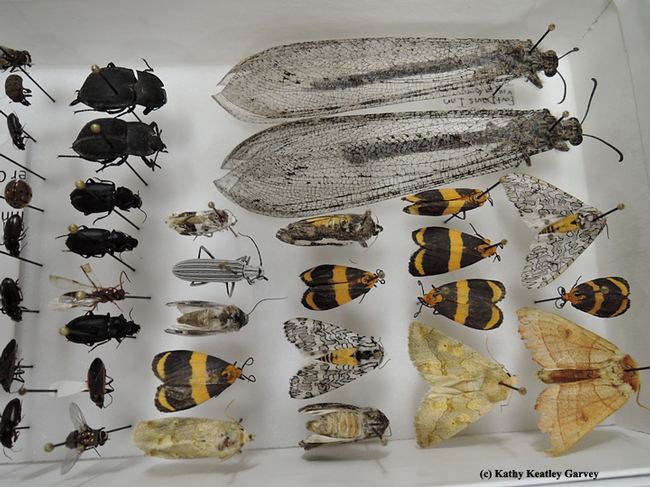