The spider failed to snag a butterfly, so it went for Plan Bee.

That would be the honey bee, Apis mellifera.

The bee is usually foraging for nectar and pollen and not that aware of her surroundings, especially a cunning and very hungry spider.

So this orbweaver lies in wait for prey to appear on its "dinner plate." A venomous bite and the bee is paralyzed. And dinner is served à la carte.

It's not what Ernest Hemingway would call a pretty sight. But then again, everything eats in the garden.

Repeat: Everything eats in the garden whether we want it to or not. 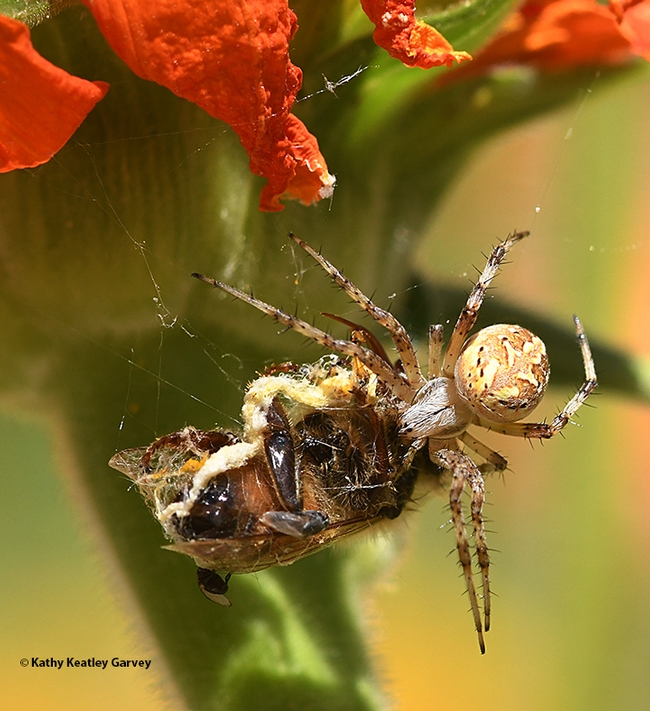 A spider eating its prey during the partial solar eclipse in Vacaville, Calif. (Photo by Kathy Keatley Garvey)
The sky darkens. The temperature drops several degrees. A breeze rustles the leaves of the African blue basil. Dogs bark. And off in the distance, a hawk shrills.

A partial solar eclipse is about to happen in Vacaville, Calif.

I am watching the insects: the honey bees nectaring on the African blue basil, an orbweaver spider munching on its   prey, an assassin bug poised on a tropical milkweed, and a praying mantis lurking beneath a showy milkweed leaf.

Today (Aug. 21) is the long-awaited Great American Eclipse. The totality path will begin at 9 a.m. in Oregon, and stretch across the country to South Carolina.

Hmm, I wonder, how will the bugs in our pollinator garden react to a partial eclipse?

It won't be drastic, I predict. And it wasn't.

The bees foraged before, during and after the eclipse, primarily on the African blue basil, which is usually covered with bees. During the height of the eclipse, however, as the skies darkened, a little more than half remained. After the eclipse, when the temperature increased and the wind ceased, the number of bees returned to normal.

"Honey bees tend to act like night is falling if the eclipse takes out quite a bit of the sunlight," says honey bee guru Eric Mussen, Extension apiculturist emeritus and president of the Western Apicultural Society. "Then they 'wake back up' afterwards."

Despite the eclipse, the spider kept eating its prey. (Sure hope it wasn't that blue dragonfly, Libellula luctuosa, "the widow skimmer" I saw yesterday.) The praying mantis kept lurking. The assassin bug raised its antennae. And the bees--although fewer of them--just kept foraging.

Two stink bugs opted to procreate on the bluebeard, Caryopteris x clandonensis. A Gulf Fritillary fluttered by and stopped to sip nectar from the Mexican sunflower (Tithonia). The assassin bug crawled higher on the milkweed, poised for an ambush.

The spider tugged its prey beneath a leaf, abandoning its web. Well, that's that, I thought.

Not so. The sticky web snagged a honey bee while the spider was polishing off its first prey. Okay, spider, you've already had your breakfast. You don't need a second helping. Not today."

I freed the struggling bee and off it buzzed to forage another day.

A partial eclipse, but a full escape... 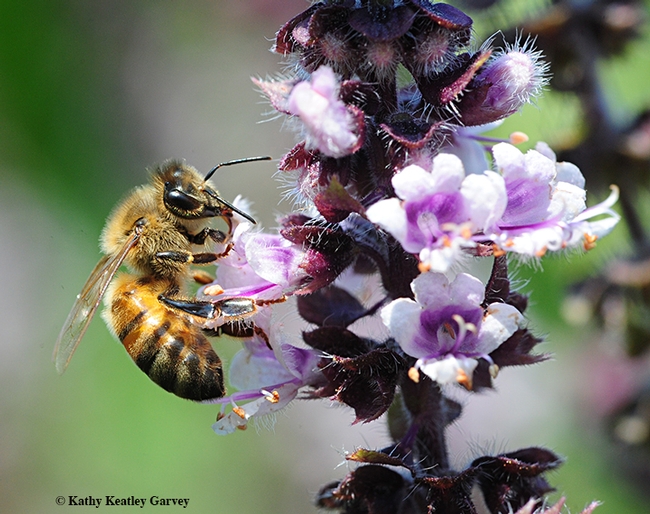 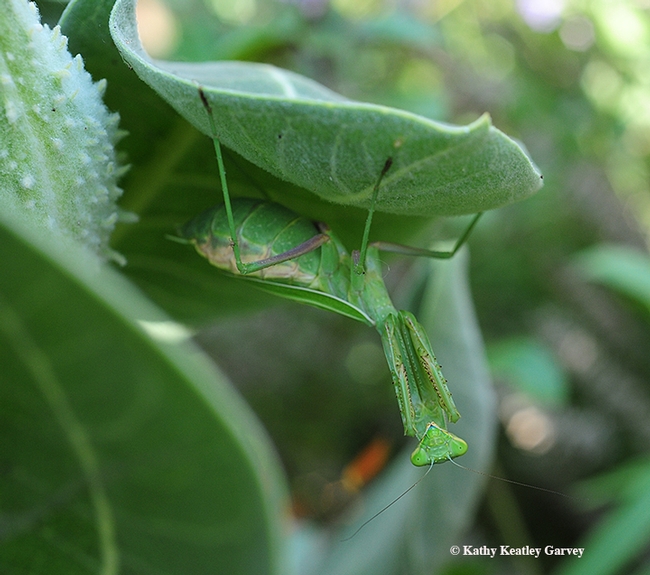 A praying mantis, a female Stagmomantis limbata (as identified by Andrew Pfeifer) lurks beneath a milkweed leaf during the partial eclipse in Vacaville, Calif. (Photo by Kathy Keatley Garvey) 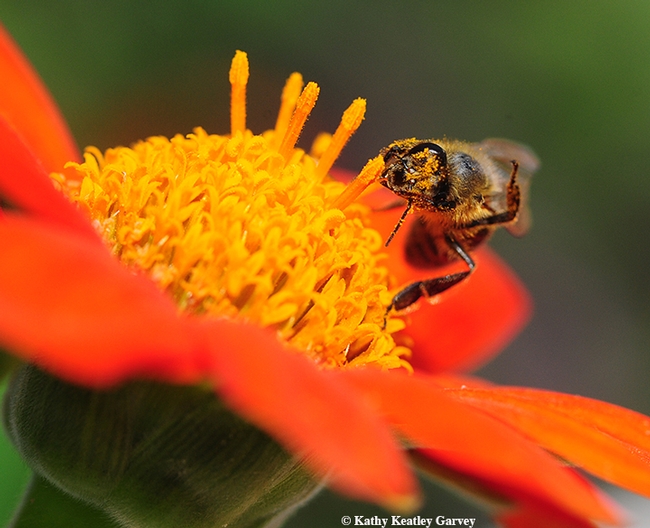 A pollen-coated honey bee ignores the eclipse and forages on a Mexican sunflower (Tithonia). (Photo by Kathy Keatley Garvey) 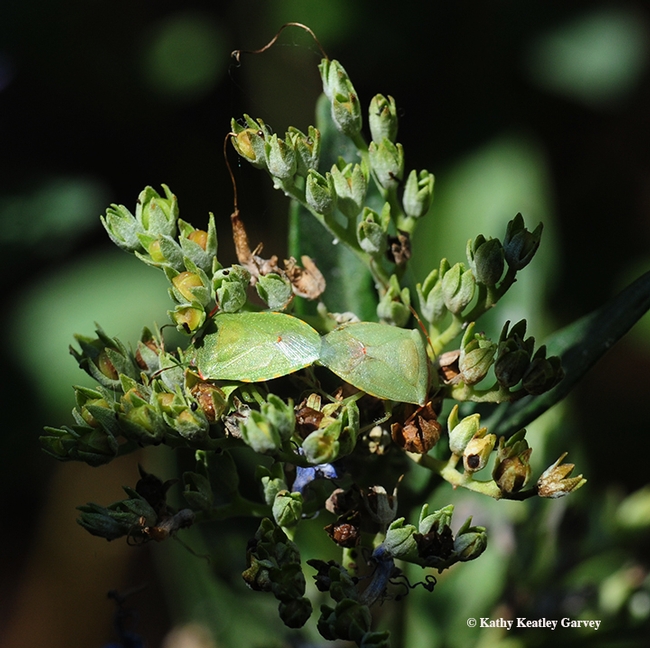 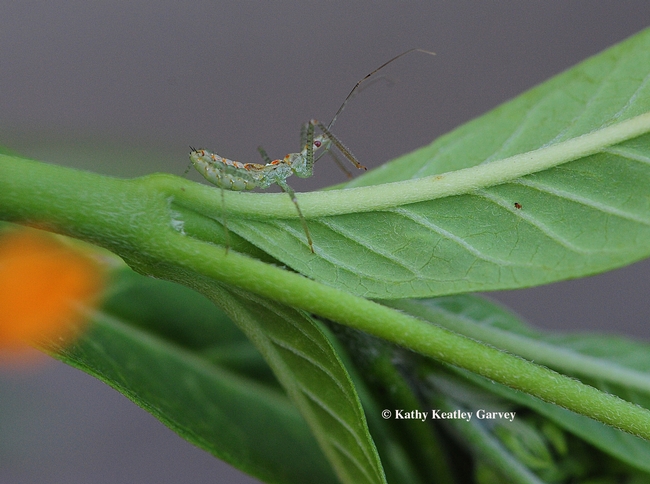 An assassin bug looking for prey. It's on a tropical milkweed. (Photo by Kathy Keatley Garvey) 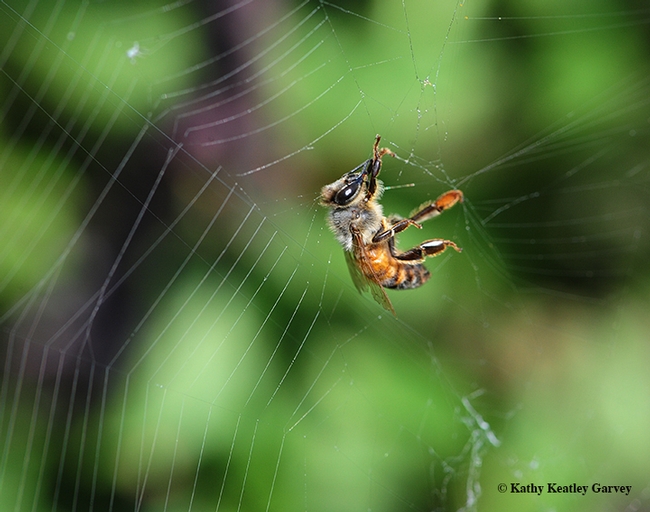