The Anise Swallowtail (Papillo zelicaon) that fluttered into our bee garden last weekend and began nectaring on zinnia wasn't quite herself.

Her yellow and black coloring and the striking blue spot on the rear left wing looked fine. But the blue spot was MIA on the rear right wing. In fact, a huge chunk of that wing was MIA.

Its missing parts told part of the story: It had managed to escape a predator, probably a bird, praying mantis or spider.

"Good thing she survived," said butterfly expert Art Shapiro, distinguished professor of evolution and ecology at the University of California, Davis who monitors the butterflies of Central California. "It's a gravid female." (Distended with or full of eggs.)

"They have several generations (late February or March-October)," he writes on his website, Art's Butterfly World. The Anise Swallowtails breed largely on fennel or anise (Foeniculum vulgare) and poison hemlock (Conium maculatum). Both, he says,  are naturalized European weeds.

The butterfly's usual range, according Wikipedia, "extends from British Columbia and North Dakota at its northern extreme, south to the Baja California peninsula and other parts of Mexico. It is occasionally reported from the southeastern United States, but its normal range does not extend east of New Mexico. In all the more northerly parts of the range, the chrysalis hibernates."

The Anise Swallowtail is commonly found in fairly open country, Wikipedia says, and "is most likely to be seen" on bare hills or mountains, in fields or along roadsides.  "It is often seen in towns, in gardens or vacant lots."

We've seen P. zelicaon on plants from A to Z: anise along roadsides and zinnias in our garden.

Zelicaon on a zinnia... 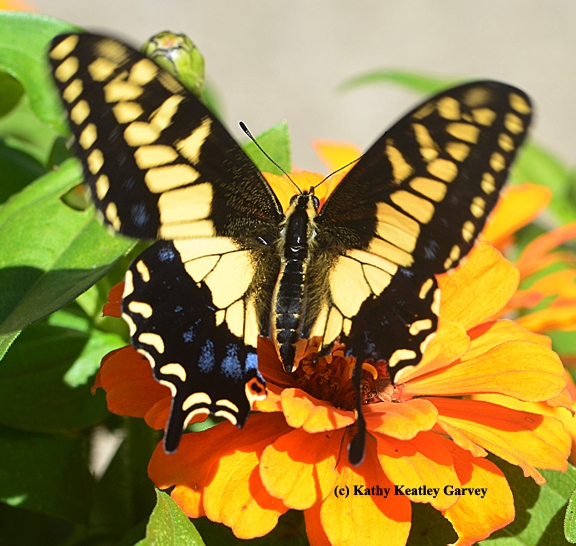 This Anise Swallowtail is missing part of its wing. A predator missed. (Photo by Kathy Keatley Garvey) 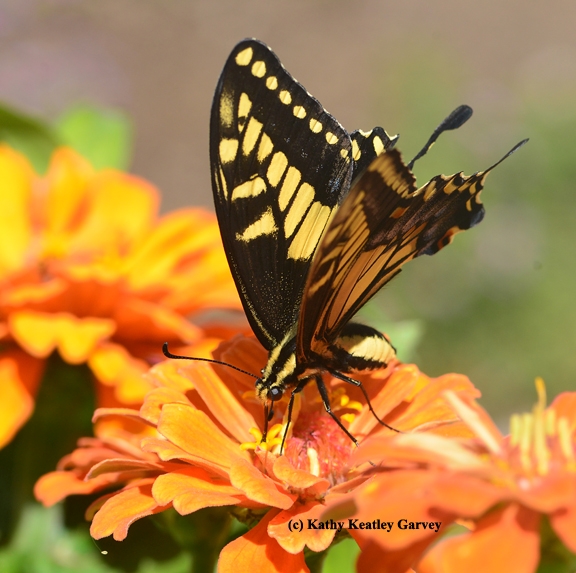 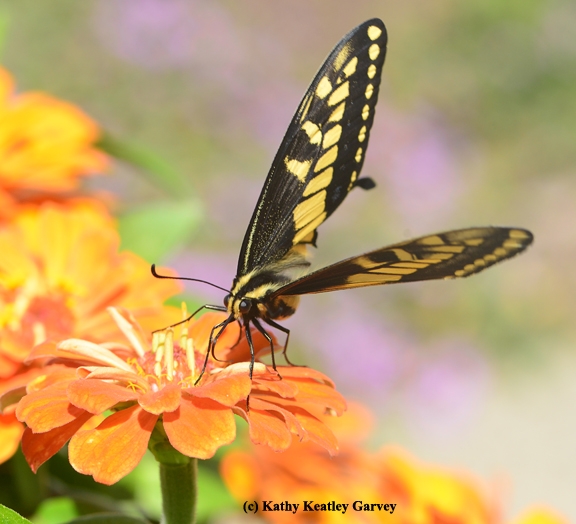 Orange zinnias not only brighten our autumn days but glorify our gardens.

And when there's a bug on the zinnias, all the better.

This insect, identified by Senior Insect Biosystematist Martin Hauser of the California Department of Food and Agriculture, is a fenale Eristalis hirta, aka hover fly or flower fly. It belongs to the family Syrphidae, order Diptera and is one of about 99 species in the genus.

Look for them on a flower near you. And oh, yes, they're pollinators, pollinating such fruits as apples, pears, blackberries and raspberries.

And speaking of plants and insects, if you're around UC Davis on Wednesday, Nov. 6, don't miss the UC Davis Department of Entomology and Nematology seminar by Patrick Abbot, an associate professor of biological sciences at Vanderbilt University, Nashville. He'll speak on “Cooperation and Conflict at the Plant/Insect Interface” from 12:10 to 1 p.m. in 122 Briggs. Plans are to record the seminar for later posting on UCTV. 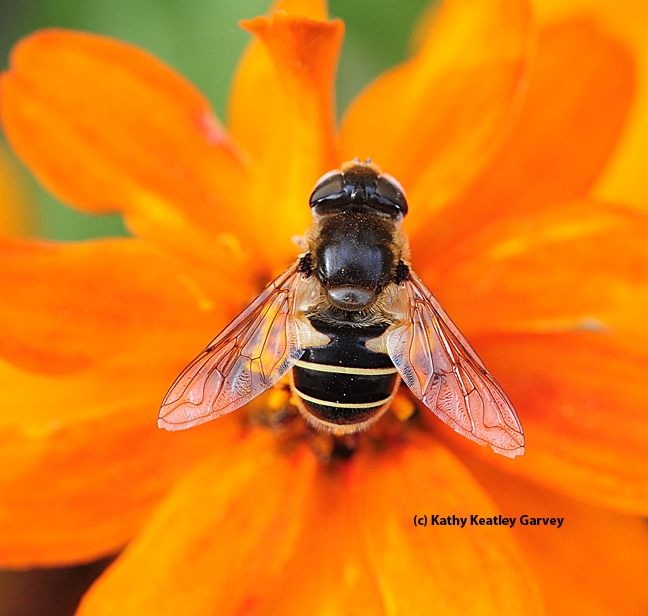 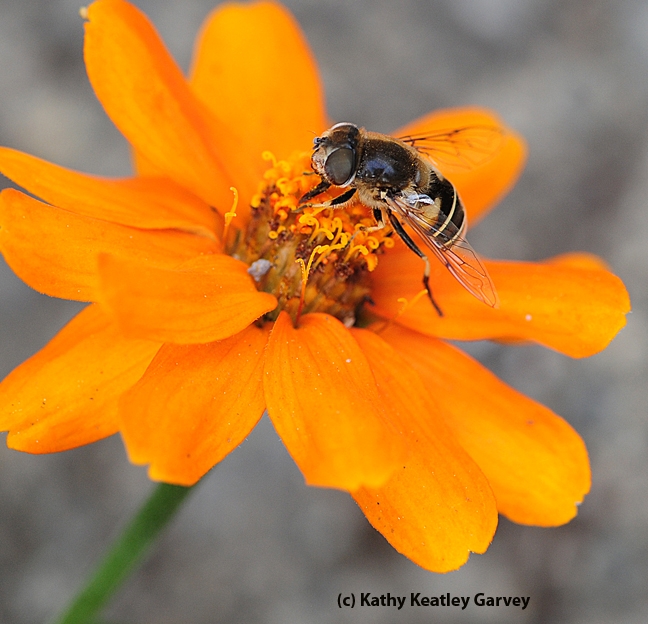 Yes. It's not considered a "bee plant" like the salvias, lavenders and mints, but bees do forage on it occasionally.

The genus, from the aster family (Asteraceae), derives its name from the German botanist, Johann Gottfried Zinn.

At the Hoes Down Harvest Festival last weekend at the Fully Belly Farm, an organic farm in Guinda, deep in the heart of Capay Valley, life took a celebratory twist. The annual festival, so named because folks put down their hoes to celebrate the harvest, includes educational farm tours, a children’s area, hands-on workshops, live music, and the sale of organic produce (fruits, vegetables, olive oil and honey).

This year, the 23rd annual event, weavers wove, spinners spun and a blacksmith blacksmithed just as our great-grandparents did.

And those little honey bees that make it all possible, buzzed amid the basil, mints, salvias--and yes, zinnias. 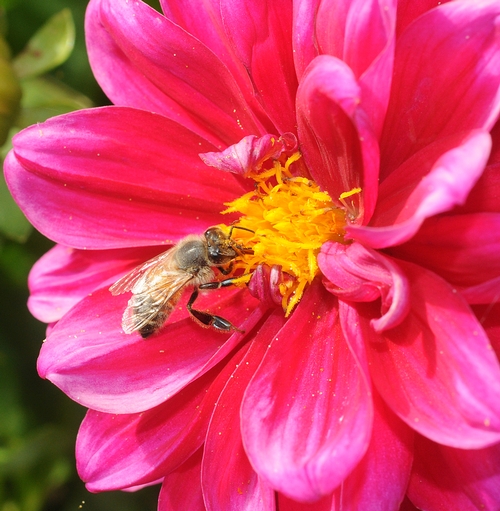 Honey Bee on Zinnia
FORAGER--A honey bee forages on a zinnia, a colorful flower that's a member of the aster family. (Photo by Kathy Keatley Garvey) 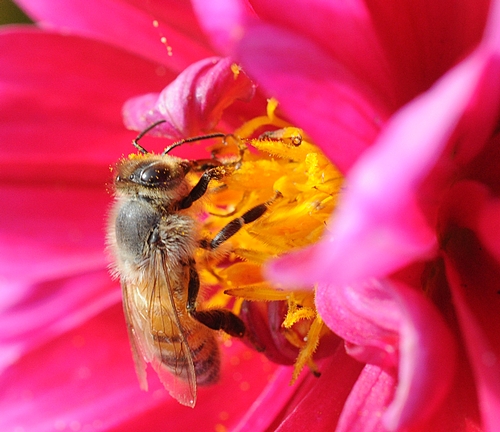 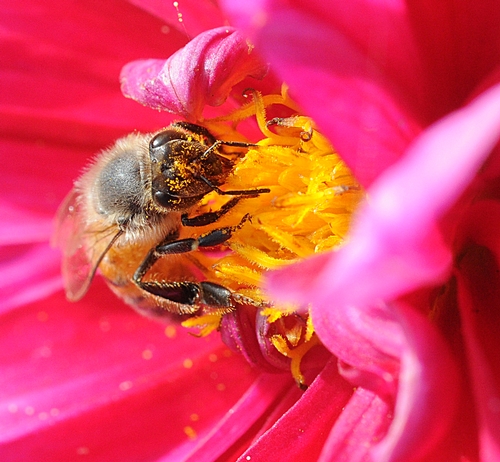 Published on: August 11, 2010
If you've seen a lot of buckeye butterflies this season, you're not alone.

It's a big year for buckeyes, says noted butterfly expert Arthur Shapiro, professor of evolution and ecology at the University of California, Davis. He counts between "30 and 85 a day" in West Sacramento and North Sacramento.

The common buckeye butterfly (Junonia coenia) is not only distinctive, but quite attractive, especially when it lands on a red zinnia.

Its large eye spots on the wings (probably meant to scare off predators) draw you to its world of color and drama.

We saw this buckeye (below) in Napa, just off the Napa-St. Helena Highway. However, buckeyes are found all over the United States, except in parts of the northwest.

Maybe the northwest, too! An image of the buckeye appeared on a 24-cent U. S. postage stamp issued in 2006.

This intriguing member of the Nymphalidae family also appears on a popular poster available in the Bohart Museum of Entomology gift shop. The insect museum, at 1124 Academic Surge, UC Davis campus, also counts this butterfly as among its seven million mounted specimens. 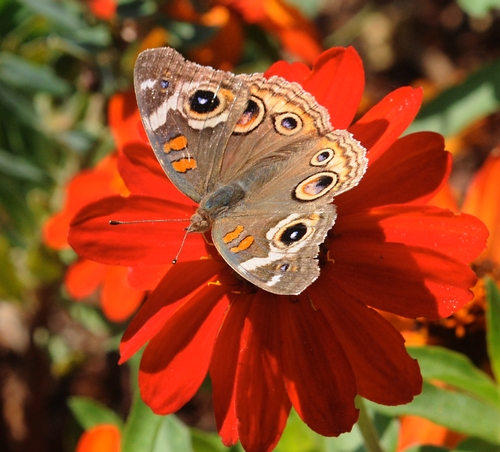 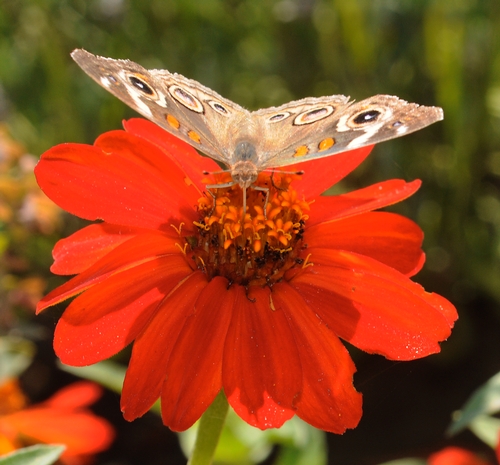