If you're missing the warmth of summer and watching butterflies flutter around your garden,  sometimes it's good to back pedal.

We were looking through our zinnia photos today and came across a Gulf Fritillary (Agraulis vanillae) spreading its wings on two different zinnias.

We're not sure if if got a zip, zest or zing out of the zinnias, but it lingered and so did we.

The colors clashed in one photo. Good thing the fashion police aren't around.

The butterfly didn't mind, and neither did the zinnia. 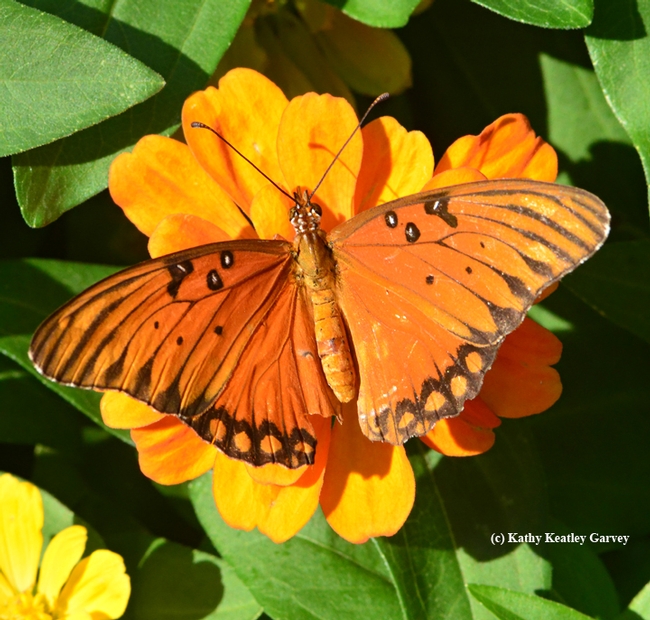 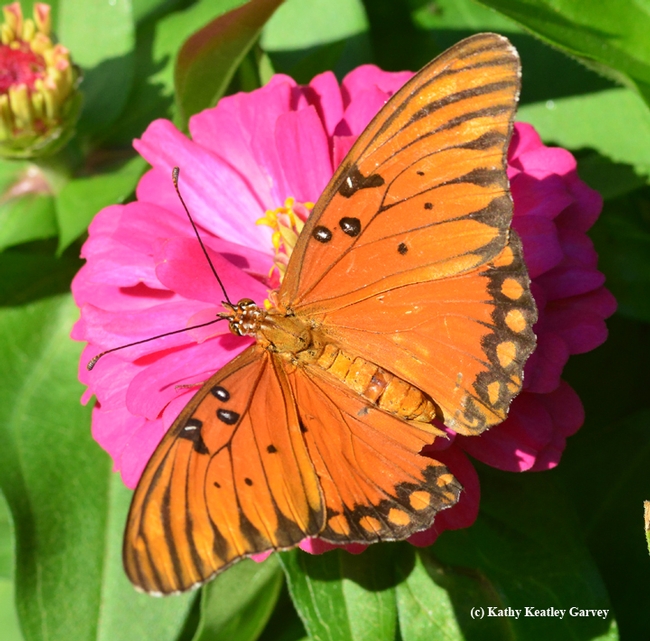 Watching honey bees zero in on the zinnias: Zounds!

Zinnias, known throughout the world as showy and easy-to-grow flowers, are as colorful as they are attractive to bees.

Last week we watched a honey bee head toward a zinnia, grab some nectar, buzz around the blossom, and return again and again.

The site: the Häagen-Dazs Honey Bee Haven, which is quite attractive to people as well as to pollinators. The half-acre garden, open from dawn to dusk, is located on Bee Biology Road, next to the Harry H. Laidlaw Jr. Honey bee Research Facility, west of the central UC Davis campus. Admission is free for self-guided tours. Those interested in guided tours can contact Christine Casey at cacasey@ucdavis.edu for more information. Several interns are working in the garden this summer: Danielle Wishon, Nick McMurray and Eric Xu. Wishon just received her bachelor's degree in entomology from UC Davis, and both McMurray and Wu are undergrads at UC Davis: McMurray is studying entomology, and Xu, landscape architecture.

At the haven, you'll find plants from "A" to "Z"--from almonds to zinnias, and lots in between. It's a year-around food source for the Laidlaw bees and other pollinators and serves as an educational resource for visitors.

Want to know what's planted in the garden right now? Check out the plant list posted on the Laidlaw facility website. 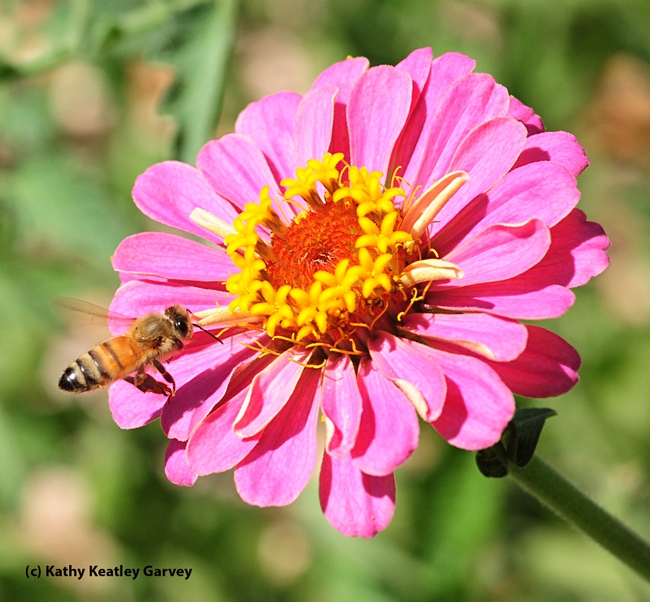 A honey bee zeroing in on a zinnia. (Photo by Kathy Keatley Garvey) 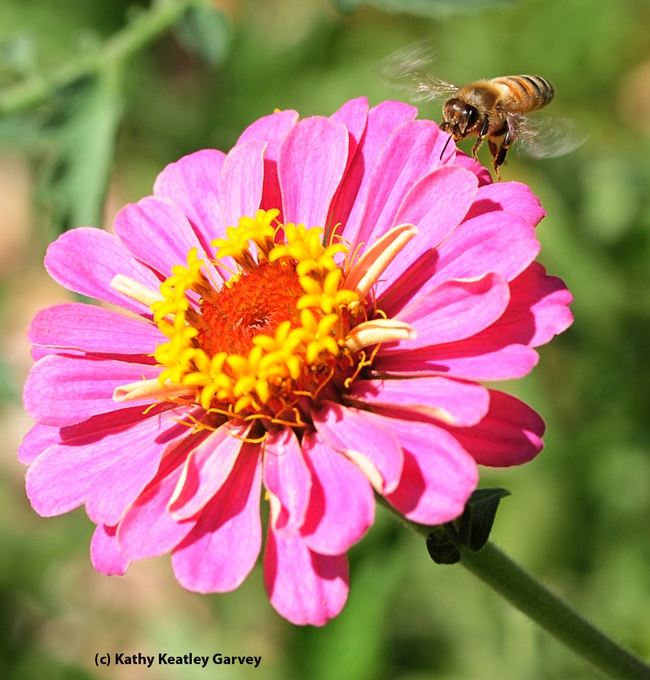 Coming in from the other side. (Photo by Kathy Keatley Garvey) 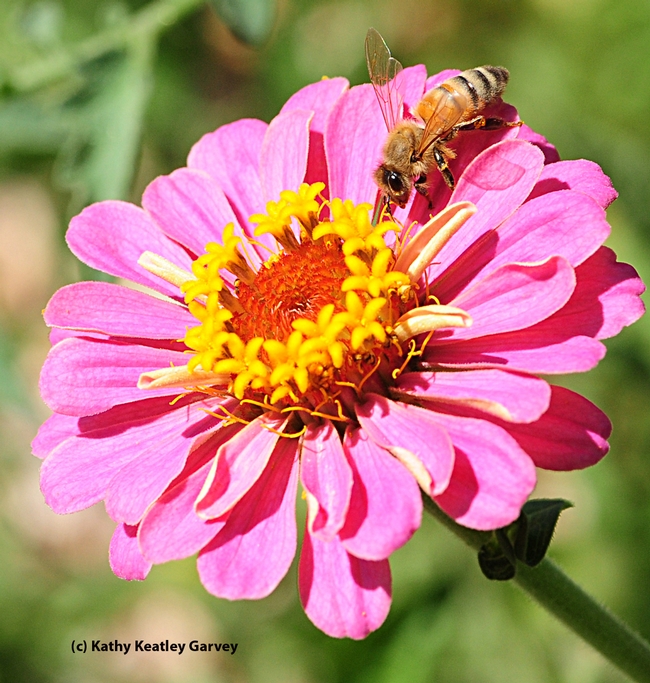 Up and over the top. (Photo by Kathy Keatley Garvey) 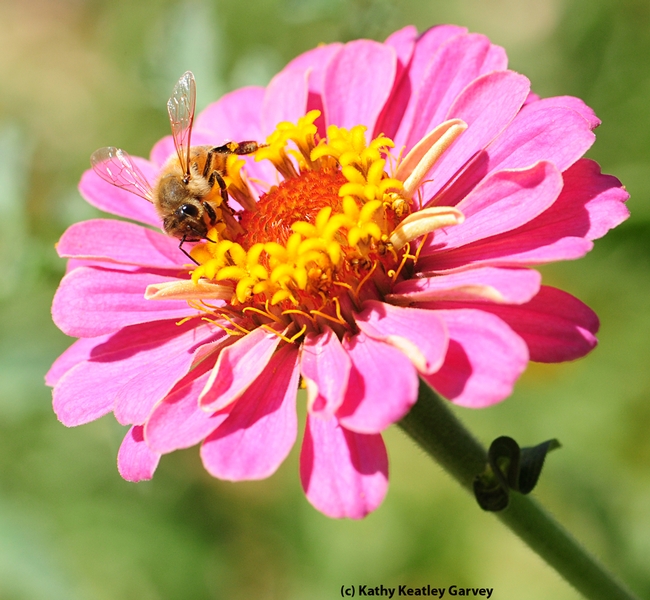 The long-stemmed vibrant flowers attract honey bees from the Laidlaw apiary, neighboring bees, and assorted other pollinators, including sunflower bees (after all, zinnias belong to the sunflower family, Asteracae).

Last year the haven attracted the attention of Australian author Mark Leech, who was researching a book, Planting for Pollen and Nectar Supply for the Australian Rural Industries R&D Corp.

Leech, who lives in Lanceston, Tasmania, Australia, so far holds the record of traveling the greatest distance to visit the garden. The previous record-holder: beekeepers from Kentucky.

"The book," Leech wrote, "is to encourage planting for bee forage across the landscape from urban to the rural environment and all climate zones."

If you want to tour the garden, it's open from dawn to dusk--no admission.  The key goals of the garden, the jewel of the UC Davis Department of Entomology and the California Center for Urban Horticulture, are to provide bees with a year-around food source for the Laidlaw bees and other pollinators; to raise public awareness about the plight of honey bees; to encourage visitors to plant bee-friendly gardens of their own; and to provide research opportunities.

Volunteer gardeners meticulously tend the garden every Friday morning. Sometimes you'll see them planting and watering on the weekends.

The art work in the haven is magnificent. Donna Billick of Davis, a self-described rock artist, created the 6-foot long ceramic sculpture of a worker bee. She and entomologist/artist Diane Ullman co-founded the UC Davis Art/Science Fusion Program, and spearheaded the art projects in the garden. The art itself is a magnet.

And some of them he found on zinnias. 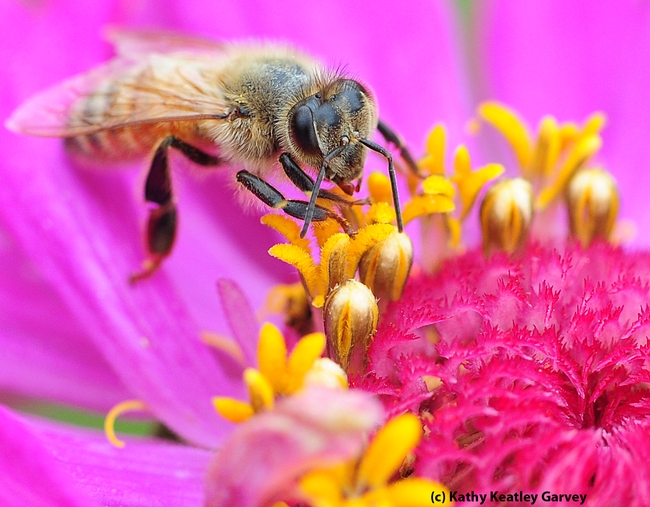 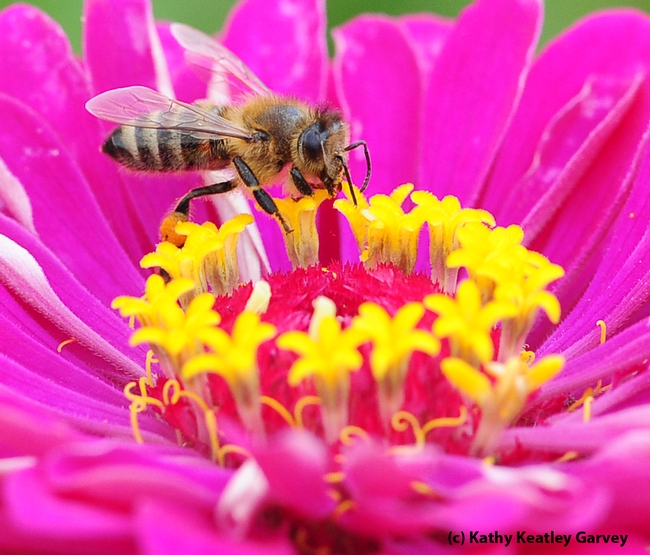 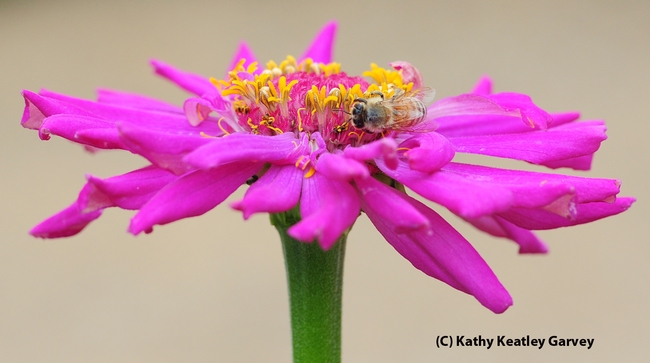