Christian Nansen, UC Davis agricultural entomologist (Photo by Kathy Keatley Garvey)
DAVIS--Using candy (Skittles), magnolia leaves, mosquito eggs and sheets of paper, UC Davis agricultural entomologist and remote sensing technology researcher Christian Nansen explored how light penetrates and scatters--and found that how you see an object can depend on what is next to it, under it or behind it.

Nansen, an associate professor in the UC Davis Department of Entomology and Nematology, published his observations in a recent edition of PLOS ONE, the Public Library of Science's peer-reviewed, open-access journal. He researches the discipline of remote sensing technology, which he describes as “crucial to studying insect behavior and physiology, as well as management of agricultural systems.”

“We don't think of us humans having x-ray vision, but part of what we see is actually reflectance from layers/tissues below the surface,” Nansen related. “Like the fairy tale about how a true princess can feel a pea underneath many mattresses, penetration of light affects what we consider surface reflectance. This is easily demonstrated by placing a white sheet of paper on top of a paper with colored dots--even with a few sheets of white paper on top of the dots, it is still possible to see the colored dots--so some level of penetration is detectable by the human eye. But advanced cameras are much more sensitive to penetration than the human eye.”

Biomedical researchers “take great advantage of penetration--the ability of radiometric energy to penetrate into soft human tissues, such as the brain, liver, lung, skin--to characterize the function or structure of tissues as part of disease diagnosis and image-guided surgery,” Nansen said. “But in non-medical classifications of objects, penetration and scattering represent a challenge, because these optical phenomena can lead to unexpected ‘noise' in the reflectance data and therefore reduced performance of reflectance based classifications of objects.”

In recent years, Nansen has shown that reflectance profiling of objects can be used to differentiate viable and non-viable seeds; insects expressing terminal stress imposed by killing agents; developmental stages of fly pupae; and insect species in a cryptic complex. 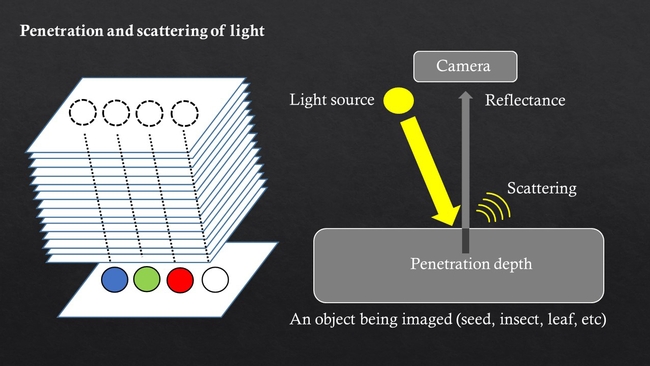