Chuck Fox and Lenny
DAVIS--Professor Chuck Fox of the University of Kentucky, Lexington, will speak on "Inbreeding-Environment Interactions: Experimental Studies and a Meta Analysis" at the UC Davis Department of Entomology and Nematology noonhour seminar on Wednesday, Nov. 5 in 122 Briggs Hall.

One of Fox's research subjects is a beetle, Callosobruchus maculatus, commonly known as the cowpea weevil or cowpea seed beetle. A member of the leaf beetle family, Chrysomelidae, it is a common pest of stored legumes. The beetle is found every continent except Antaractica.

Fox received his bachelor's degree in zoology in 1987 from UC Davis, and his doctorate in 1993 from UC Berkeley through the Department of Integrative Biology. While in graduate school, he worked at UC Davis for three years (1991-1993) with Hugh Dingle, now emeritus professor of entomology.

He completed postdoctoral research at the Department of Biological Sciences, University of South Carolina (1993-1996), working in the laboratory of Timothy Mousseau.

Fox lists his research interests as:

Some of his recently published papers on inbreeding depression:

Wednesday, Dec. 3
To be announced

Plans call for recording the seminars, coordinated by Professor James Carey,  for later posting on the web. 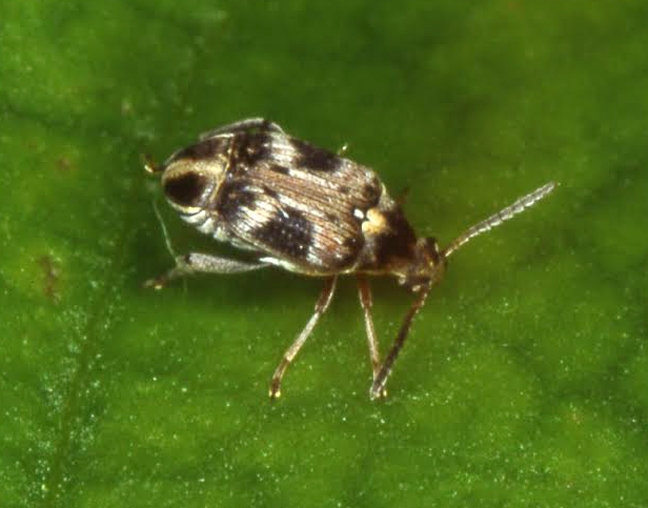 Jay Rosenheim (Photo by Jonathan Eisen)
DAVIS--Professor Jay Rosenheim of the UC Davis Department of Entomology and Nematology has received the 2014 "Excellence in Undergraduate Education Award" in the College of Biological Sciences from the Associated Students of UC Davis.

Rosenheim was the winning recipient among several faculty nominated in the College of Biological Sciences. He teaches "Introduction to Biology: Principles of Ecology and Evolution (BIS 2B)." This is an introduction to basic principles of ecology and evolutionary biology, focusing on the fundamental mechanisms that generate and maintain biological diversity across scales ranging from molecules and genes to global processes and patterns, according to the course catalog.

The ceremony honoring Rosenheim and other nominees took place Monday, June 2 in the King Lounge of the Memorial Union.

This is the second time that Rosenheim has been honored with the Excellence in Undergraduate Education Award for teaching BIS 2B, a first-year biology course that he developed. In 2009, he received the "Excellence in Education Award" in the College of Agricultural and Environmental Sciences.

Students nominate and select the recipients.

In addition to BIS 2B, Rosenheim also teaches SAS 110 (Applications of Evolution in Medicine, Human Behavior, and Agriculture).

Rosenheim is one of the co-founders of the UC Davis Research Scholars Program in Insect Biology with faculty members Louie Yang and Joanna Chiu of the Department of Entomology and Nematology.

Rosenheim joined the faculty in 1990. He received his bachelor of science degree from UC Davis in 1983 with a double major in entomology and genetics, and his doctorate in entomology from UC Berkeley in 1987. He completed postdoctoral work at the University of Hawaii, 1987-1989, and was a Fulbright Scholar in Israel from 1989 to 1990. His research involves insect ecology, with a focus on host-parasitoid, predator-prey, and plant-insect interactions interactions, with direct applications to biological control.

At the awards ceremony, the educator-of-the-year award went to Rebekka Andersen, an assistant professor in the University Writing Program. 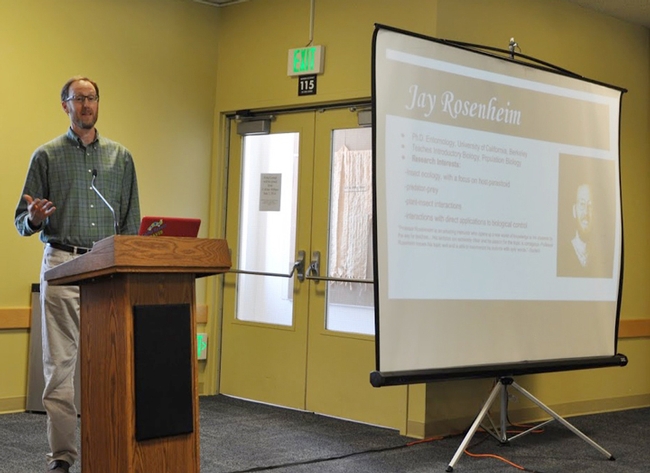 Murphy, a fourth-year UC Davis student majoring in neurobiology, physiology, and behavior, received $1563 to study “Codon Optimization: Cracking the Genetic Code.”  A codon is a unit of three nucleotides that together codes for an amino acid, the building block of proteins in all organisms. Using the fly, Drosophila melanogaster, as a model system, Murphy is exploring the functional significance of codon bias, a phenomenon in which certain codons are favored over others even though they may code for the same amino acid.

Murphy has worked in the Chiu lab since 2011. “Katie is one of the most talented and hardworking student I have ever encountered,” Chiu said. “I can't think of anyone else who is more deserving of this award.”

Murphy is one of a select group of students in the Research Scholars Program in Insect Biology, organized and directed by professor Jay Rosenheim and assistant professors Louie Yang and Joanna Chiu. The program aims to provide undergraduates with a closely mentored research experience in biology.

The Provost's Undergraduate Fellowship supports undergraduate students doing research or creative projects under the guidance of UC Davis faculty members. Students from all discipline areas are eligible to apply

As a Provost fellow, Murphy will present her work at the annual UC Davis Undergraduate Research Conference, which takes place April 25–26 in Freeborn Hall.

In 2012, Murphy received a UC President's Undergraduate Research Fellowship for her research on "Transgenic Yeast as an Organic Pesticide," exploring the use of RNAi technology in combating the invasive pest, the spotted-wing Drosophila suzukii. She also received a 2013 McBeth Memorial Scholarship and a 2010 Voorhies Memorial Scholarship.

Murphy is a 2010 graduate of Kelseyville High School (Lake County) and valedictorian of her class.

“My favorite subject in high school was biology,” she recalled. “My favorite project was when we dissected a cat in anatomy. In college, I lucked into a lab job where my boss and co-workers were willing to teach me and allowed me the freedom to take on my own projects, an opportunity that few undergrads get.”

Following graduation, she plans to travel and continue her current research projects. 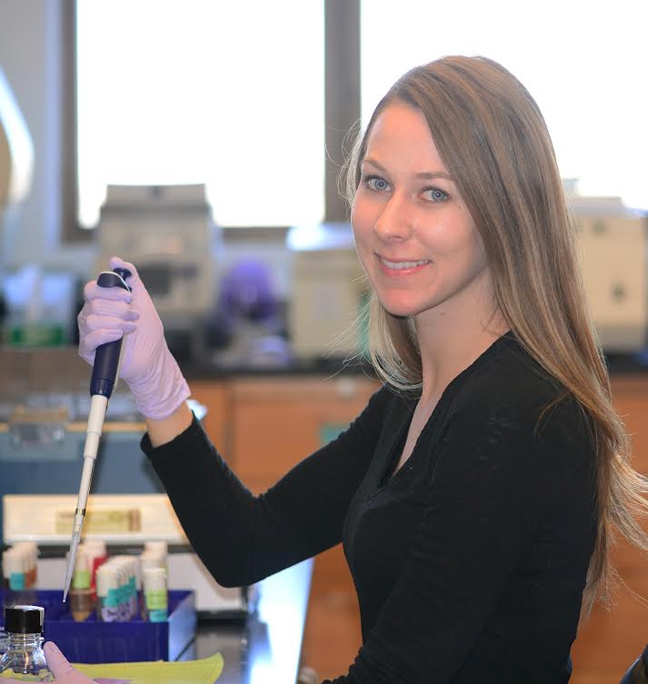 Kristina Tatiossian (far right) with Provost Ralph Hexter and Lindsey Black. (Photo courtesy of UC Davis Undegraduate Education)
Kristina Tatiossian, one of the first members of the UC Davis Research Scholars Program in Insect Biology, received high praise and an honorable mention award at a recent ceremony honoring the recipients of the Chancellor’s Award for Excellence in Undergraduate Research.

In announcing the awards, Provost Ralph Hexter noted (1) that Tatiossian’s research on the walnut twig beetle makes a significant contribution to establishing an integrated pest management plan; (2)  that her  manuscript, “Flight Response of the Walnut Twig Beetle, Pityophthorus juglandis, to Aggregation Pheromones Produced by Low Densities of Males”; is in preparation for submission to the Journal of Chemical Ecology; and (3) that her poster received attention at a national entomology conference for the ceramic bark beetle she sculpted.

A photo of Tatiossian and Black appears as the cover photo on the UC Davis Undergraduate Facebook site at https://www.facebook.com/UCDavisUndergraduateEducation. Her poster, including the ceramic bark beetle she crafted, is mounted on the third floor of Briggs Hall, next to the administration office of the UC Davis Department of Entomology and Nematology.

Tatiossian, who joined the Research Scholars Program in September 2011, graduated from UC Davis in three years (she achieved the top grade point average in entomology) and is currently working in the laboratory of Diane Ullman, professor of entomology and associate dean for undergraduate academic programs in the College of Agricultural and Environmental Sciences.

Among those nominating her or supporting her nomination were her mentor, chemical ecologist and forest entomologist Steve Seybold of the Davis-based Pacific Southwest Research Station, USDA Forest Service, and an affiliate of the UC Davis Department of Entomology; professor Jay Rosenheim who co-founded and co-directs the Research Scholars Program in Insect Biology; and Diane Ullman. Steve Seybold, mentor
The Research Scholars Program in Insect Biology, aims to provide undergraduates with a closely mentored research experience in biology. Rosenheim and assistant professors Louie Yang and Joanna Chiu, all of the UC Davis Department of Entomology and Nematology, coordinate the program, which places select freshman and sophomore students in the laboratories of their mentors to do research in insect biology and allied sciences.

Rosenheim noted that Tatiossian was a member of the first cohort of undergraduates recruited to the program. “I witnessed her tremendous determination to develop independent research skills” and she “succeeded in all phases of the project, from design, data collection, data analysis and manuscript preparation.”

Among the 30 students who have entered the program since 2011, “Kristina is absolutely the standout in terms of motivation and enthusiasm for research,” Rosenheim said. “She leaped at the opportunity to learn how to become an independent researcher. Kristina will generate the first-lead authored publication for any student in our program—hopefully, the first of many. In this sense, she has already been a trailblazer for our program.”

Seybold noted that Tatiossian “worked on the host-finding behavior of a major pest of walnut trees, the walnut twig beetle.  This is a nationally significant pest that spreads a disease of live trees called thousand cankers disease (TCD).  The condition threatens not only the English walnuts that form the basis of the California nut industry, but also the black walnuts that represent over $500 billion in growing stock value of fine wood products in the eastern U.S.

“Kristina formulated her research project in fall 2011 and spring 2012 and then carried it out in spring and summer 2012.  As she developed the project, she also applied to the Department of Entomology for a McBeth Scholarship, which she was awarded in summer 2012.  The award helped her offset the costs of her research supplies and funded her travel to several scientific meetings.”

“Kristina collected a live population of the walnut twig beetle from a traditional orchard habitat in the southern Central Valley, reared the insects to the adult stage, and re-introduced the adults into freshly cut black walnut branch sections.  Once the male beetles had begun producing their aggregation pheromones (attractants) in the branch sections, Kristina used the branch sections as lures to attract new males and females into flight traps.  Using this basic technique she was able to establish that as few as 1 to 5 male beetles would provide a threshold of flight behavioral attraction in the field.  This finding has ramifications for establishing an integrated pest management program for the walnut twig beetle nationwide.”

Tatiossian developed and displayed her poster at the 60th Annual Meeting of the Entomological Society (ESA), held Nov. 11-14, 2012 in Knoxville, Tenn.  “Her poster reached a very interested target audience because Knoxville is in the heart of the distribution of eastern black walnut trees and in the center of the current distribution of TCD in the eastern U.S.,” Seybold said. “In a very creative touch, Kristina sculpted a replica of the female walnut twig beetle (through her participation in the UC Davis Art/Science Fusion Program) and attached the sculpture directly to her poster.  This elicited quite a response at the national meeting and led to a news story released by UC Davis.”

In addition, Tatiossian delivered an oral presentation on her research at the 97th Annual Meeting of the Pacific Branch of the ESA in South Lake Tahoe, Nev. 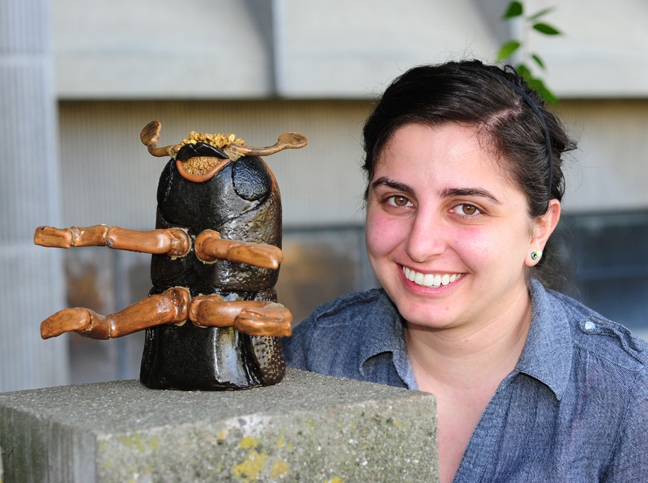 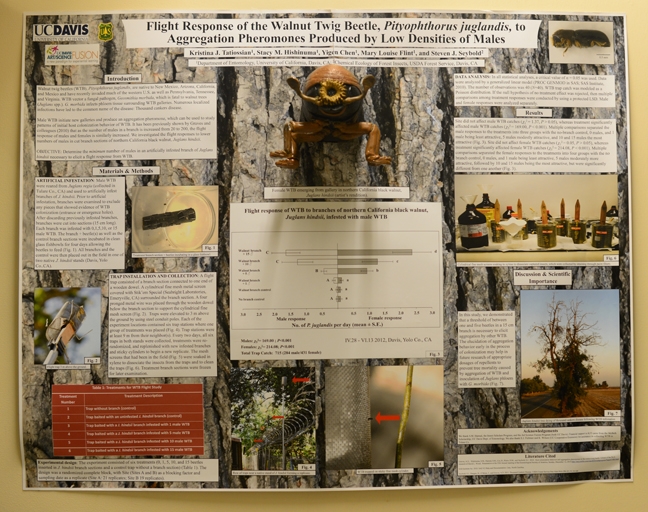 He was selected the winner of the "Excellence in Education Award" in the College of Agricultural and Environmental Sciences.

Rosenheim developed a first-year biology course, Biological Sciences 2B--an introduction to ecology and evolution--that drew rave reviews from the students. Some 360 students enrolled in the course.

Students nominate and select the recipients. This year the students nominated some 150 professors, lecturers and teaching assistants. The Academic Affairs Commission narrowed the list to 18 finalists and then conducted interviews before selecting the winners.

The Academic Affairs Commission paid tribute to the six UC Davis professors at its seventh annual Excellence in Education awards ceremony, held May 20 in the Memorial Union.

In addition to Rosenheim, the winners are Stephen Lewis from Engineering, Charles Walker from Social Sciences, Michael Lazzarra from Humanities, Arts and Cultural Studies, Andreas Toupadakis from Mathematics and Physical Sciences, and Douglass Gross from Biological Sciences. All nominees received a certificate featuring a quote, while the winners were given a plaque.

Rosenheim joined the UC Davis Department of Entomology faculty in 1990. He received his bachelor of science degree from UC Davis in 1983 with a double major in entomology and genetics, and his doctorate in entomology from UC Berkeley in 1987. He completed postdoctoral work at the University of Hawaii, 1987-1989, and was a Fulbright Scholar in Israel from 1989 to 1990.

Rosenheim's work has appeared in some 130 publications. He serves or has served on numerous editorial boards and distinguished research organizations. His credits include Annual Review of Entomology; Biological Control; Entomologia Experimentalis et Applicata; Oecologia; Proceedings of the Hawaiian Entomological Society; guest editor, Ecology, and associate editor, Journal of Insect Science.