Rebecca Jean "RJ" Millena has just received a full-ride fellowship offer to a doctoral program at the American Museum of Natural History to join the systematics laboratory of Jessica Ware.
When five-year-old Rebecca Jean “RJ” Millena entered her kindergarten class in Concord, Calif., she immediately settled on a career choice: entomology.

An “About Me” poster hanging in her childhood home in Concord confirms it: “When I grow up, I want to be an entomologist.”

She did and she is.

“I have been absolutely obsessed with insects my entire life,” she acknowledges, remembering that she “reared tons of praying mantids and katydids that I'd found in the yard, and I had pretty big colonies of ladybugs and soapberry bugs at different times.” At age “three or four,” she remembers looking excitedly through a "kid-friendly microscope” at the Lawrence Hall of Science, UC Berkeley.

Now age 22 and a senior majoring in entomology at the University of California, Davis, and a student researcher in the laboratory of UC Davis Distinguished Professor Jay Rosenheim of the Department of Entomology and Nematology,  RJ is making incredible strides and inroads in her research on the bizarre Strepsiptera endoparasites that attack their hosts, the Ammophila (thread-waisted) wasps.

But just as one road leads to a highway, and a highway leads to an interstate, her next destination is New York City to the American Museum of Natural History's Richard Gilder Graduate School (RGGS) for a doctoral opportunity few receive. “Parasitoids are the love of my life,” said RJ, who is scheduled to receive her bachelor of science degree in entomology in June. “I want to focus on everything to do with parasitoid/parasite-host interactions and how these interactions affect the rest of the world.”

Her two-year research project entails studying the Ammophila specimens in the Bohart Museum of Entomology. As larvae, members of the order Strepsiptera, known as “twisted wings,” enter their hosts, including wasps and bees, through joints or sutures.

The Bohart Museum, home of nearly eight million specimens, houses “about 30,000 specimens of Ammophila from multiple continents,” said director Lynn Kimsey, UC Davis professor of entomology. “The majority of the New World ones, which is the bulk, were identified by Arnold Menke.”

Menke, a global wasp authority who received his doctorate from UC Davis in 1965, studying with Professor Richard Bohart (for whom the museum is named), is the author of "The Ammophila of North and Central America (Hymenoptera, Sphecidae),” considered the bible of Ammophila research.  (His book may be purchased in the Bohart Museum's gift shop.) UC Davis distinguished professor Jay Rosenheim. (Photo by Kathy Keatley Garvey)
“Strepsiptera are very unusual among parasites in that the parasite is visible on the outside of the host's body,” Rosenheim explained. “The head of the parasite protrudes between the sclerites on the abdomen. Looking across a growing list of species, RJ has shown that Ammophila species where mothers have more extended contact with their young--because they provision their nests with many, small caterpillars instead of one giant caterpillar-- are at much greater risk of acting as inadvertent vectors of strepsipteran parasites to their young.”

“RJ has shown that this one feature explains something like 90 percent of the total variation across Ammophila species in the risk of parasitism,” Rosenheim said. “Ecology virtually never works in such a predictable way; this is one truly exceptional counterexample of nature being highly predictable. Anyway, RJ's work shows that sometimes parental care can be a double-edged sword; we usually think of parental care as providing enhanced protection of offspring from predators and parasites. In this case, it proves to be the reverse.”

Said Kimsey: “RJ is one of those rare students that is focused, task-oriented and simultaneously creative. She was great fun to have working in the museum.” RJ said she “applied to UC LEADS without knowing for sure that I wanted to go to graduate school, since it still felt out of reach for me at the time, but I got in and started my undergraduate research career for real. UC LEADS was what prepared me for applying to graduate school and helped me understand my potential as a scientist.”

In the beginning, June through September 2019, her work with the Bohart Museum specimens amounted to a full-time job. “During the academic year, it was more like a part-time job where I fit in 10-12 hours working on it as my schedule allowed.”

A dean's honor student with multiple interests, she plays French horn and trumpet in the UC Davis Video Game Orchestra, and for two years performed with the California Aggie Marching  Band-Uh. In her home, she tends to a colony of Madagascar hissing cockroaches, a scorpion, tarantula, tailless whip scorpion, and African cat-eye mantis. In her four years at UC Davis,  “I've had a colony of millipedes, two other tarantulas, a giant Vietnamese centipede, and five other assorted mantis species. The five-year-old me would also be thrilled about that.”

RJ says that “being able to work with Jay on this project investigating the host-parasite relationship between Ammophila wasps and Strepsiptera was what made me fall in love with this super weird order of endoparasites, and I'm extremely excited to keep learning about them through my own work at the American Museum of Natural History!” RJ holds a stick insect from the Bohart Museum of Entomology. She volunteers for Bohart open houses and at the UC Davis Biodiversity Museum Day.
She is one of the first RGGS students to be part of Jessica Ware's AMNH research lab. Her lab mates will include doctoral candidates from Rutgers, The State University of New Jersey; Columbia University, New York; and the City University of New York.

The UC Davis student researcher is now geared toward publishing her work. “Hopefully I can get it submitted for review before I graduate—I've worked out a timeline with Jay, and we're sticking to it. I will be lead author on the paper, which is super neat.”

RJ is the first entomologist in her family but not the first in STEM. Her father, Raul, a BART engineer in Oakland and a UC Davis alumnus, is in STEM. Her mother, Lea, a full-time homemaker, “was a bachelor of arts-English major in the Philippines and won writing awards while there.“ Her sister,  Rachel Lee,  a UCLA graduate, is a theater stage manager. Her uncles and aunts include three engineers, a biochemist, a dentist and a nurse. Her grandparents pursued occupations ranging from a metallurgist and engineer to an accountant and teacher.

“So I'm the first entomologist in the family, which is fun,” she said, “and I come from a family of STEM and humanities/education combined.”

Enrolling at UC Davis as an entomology major, RJ recalled, “was a natural choice and a dream come true for me. It was also here at Davis where I started really learning about the things I want to study for the rest of my life--parasites and parasitoids--through courses like Entomology (ENT) 10 and ENT 100. The enthusiasm of my teaching assistants during those courses (Brendon Boudinot of the Phil Ward ant lab and Jessica Gillung of the Bohart Museum, respectively) and their willingness to spend valuable time answering my questions and discussing parasites with me was what really made me fall in love with these organisms as a study system.” RJ Millena portrays a monarch at the Bohart Museum of Entomology's 2019 Halloween party.
“Another very significant course was ENT 107 with Phil Ward my sophomore year—this was the first time I was in a class where we took insect-collecting trips into the field every weekend and had to develop our own mini-research project. That course marked the first time I was prompted to do formal scientific research in any form, and I fell in love with it.”

Remember the five-year-old who vowed to become an entomologist in her “About Me” poster? Now UC Davis entomologist and RGGS-bound Rebecca Jean Millena can say “This is me.”

And in a few years, “this is me” may be a museum curator. “I am a huge fan of museums,” RJ said, “and have wanted to work at the California Academy of Sciences for ages because my family and I spent a lot of time there when I was younger.” 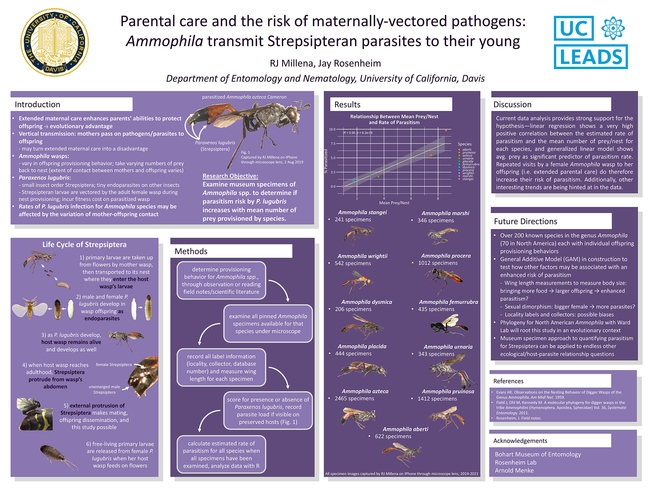 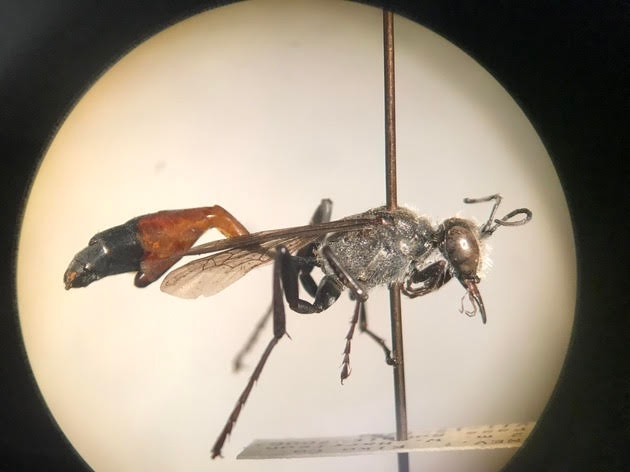 Every year the UC Davis Insect Ecology group lists its favorite papers, said community ecologist Rachel Vannette of the UC Davis Department of Entomology and Nematology. She listed the group's favorites on her lab website and also listed her lab's picks.

Menke, who received his doctorate in entomology from UC Davis in 1965, studying with Professor Richard Bohart (for whom the Bohart Museum of Entomology is named), is a noted expert on wasps. Ammophila are sometimes called "thread-waisted wasps" or "sand wasps" but neither is definitive. Ammophila comes from the Greek "sand lover." (See BugGuide.net for images.)

A partial abstract of the Menke publication:
"The North and Central American species of Ammophila are described and a key provided for their identification. Sixty-nine species are recognized, of which 62 are known from North America. The other seven are known only from Mexico. Four new species are described, hallelujah from northeastern California, linda from southern California, mexica and zapoteca from south central Mexico."

Mencke is also the co-author of "Funny or Curious Zoological Names." Included in the list: he named a species of Australian wasp, "Aha ha," as a joke. From Wikipedia: "Menke described several years after its discovery how, when he received a package from a colleague containing insect specimens, he exclaimed 'Aha, a new genus,' with fellow entomologist Eric Grissell responding "ha" doubtfully. The name of the insect is commonly found in lists of bizarre scientific names. The name was also used as the vehicle registration plate of Menke's car, "AHA HA." 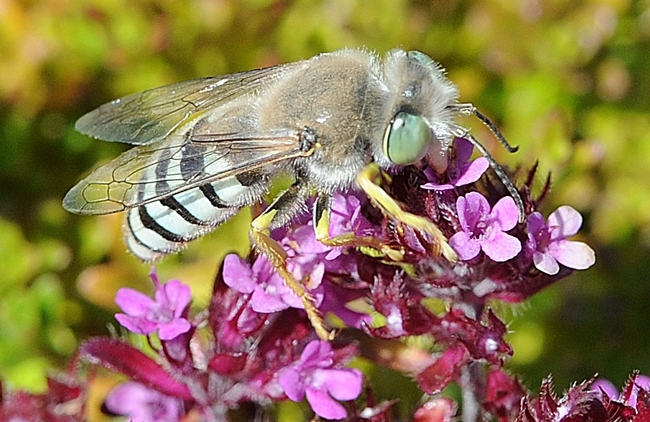 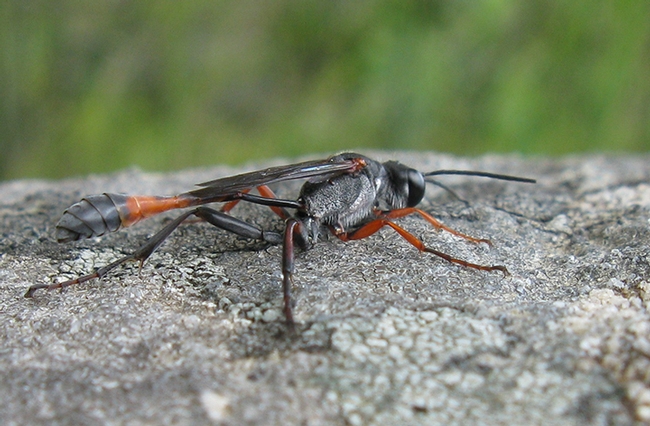