A canola field in Western Australia showing tree lines and isolated tree island which serve as environmental edges. (Photo by Dustin Severtson, former graduate student of Christian Nansen)
DAVIS--Aerosmith sang about “Livin' on the Edge,” but many species of insects show a definite preference for living on the edges of fields and orchards, and this phenomenon can lead to more accurate monitoring and better pest management tactics, according to a UC Davis student's review published in the journal Agronomy for Sustainable Development.

Hoang Danh “Derrick” Nguyen, who is studying for his master's degree in entomology with major professor and agricultural entomologist Christian Nansen of the UC Davis Department of Entomology and Nematology, says that many species of insect pests, pollinators and natural enemies show distinct preferences for environmental edges, as they transition from one habitat to another.

The paper, titled “Edge-Biased Distributions of Insects: A Review,” indicates that “the prevalence of such edge-biased distributions has considerable implications for how to sample and monitor insects, and it also suggests that in many cases pest management tactics, such as, releases of natural enemies or insecticide applications can be spatially targeted to field edges.” Black bean aphid (Aphis fabae). (Photo courtesy of Wikipedia)
In the paper, Nguyen defines “ecological or environmental edge” as “the transition between two landscape elements. It can be permanent, such as a border between two types of vegetation, or it may be temporary, such as a junction between a natural forest and a cultivated farmland.”

Nguyen wrote the paper as an undergraduate student. “He decided to write a review article on a topic related to insect ecology and pest management,” Nansen said. “His main goals were to improve his scientific writing and to get familiar with the process of publishing scientific publications. The end result was an article about a very widespread—but poorly understood phenomenon—insects are often spatially aggregated along environmental edges.” UC Davis agricultural entomologist Christian Nansen, shown here in his greenhouse, lauds the journal article by his master's student, Derrick Nguyen. (Photo by Kathy Keatley Garvey)
“He started writing drafts of this review article about six months before he started as a graduate student,” said Nansen, who specializes in applied insect ecology, integrated pest management (IPM) and remote sensing. “This review article is an example of how we can use writing of review papers as a tool to engage with undergraduate students before they start their thesis projects.” Professor Jay Rosenheim of the UC Davis Department of Entomology and Nematology also helped with the drafts.

“ We are supposed to focus more and more on ‘diversity' and here we have an undergraduate from Singapore publishing in a very prestigious journal,” he added.

In their paper, the UC Davis scientists suggested that mathematical modeling approaches can partially explain edge-biased distributions but “that abiotic factors, crop vegetation traits, and environmental parameters are factors that are likely responsible for this phenomenon.”

His projects include researching:

Nguyen served as an assistant training officer with the Singapore Armed Forces (SAF) from April 2014 to March 2015. For his studies at UC Davis, received a 2015-2019 undergraduate and graduate scholarship sponsored by Agri-Food and Veterinary Authority of Singapore. 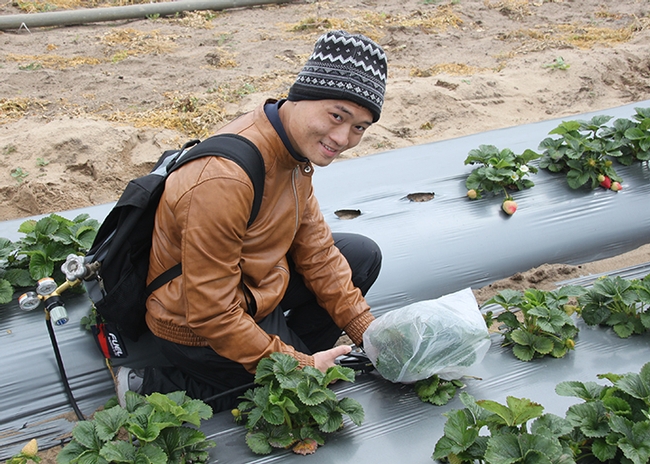