Mary Lou Flint delivers her presentation.
The name, Mary Louise “Mary Lou” Flint, the 2014 recipient of the James H. Meyer Distinguished Achievement Award, is an icon in California agriculture and the University of California's role in California agriculture, said Axel Borg, vice chair of the UC Davis Academic Federation, when he introduced her at the recent awards dinner in the UC Davis Conference Center.

“To say that Dr. Mary Louise Flint has been key to the success of California agriculture is not a misstatement or exaggeration,” Borg told the attendees. “The greatest threats to California's agriculture are the myriad of introduced and native pests and diseases. Keeping agricultural pests and diseases at bay while preserving the environment by an informed, balanced and interdisciplinary approach, an approach that is a hallmark of UC Davis.” Helene Dillard (left), dean of the UC Davis College of Agricultural and Environmental Sciences, shares a moment with Mary Lou Flint.
Flint, a longtime leader of the University of California Statewide Integrated Pest Management (UC IPM) Program and an Extension entomologist with the UC Davis Department of Entomology and Nematology, retired in June after 34 years of service.

Borg, who chaired the Meyer Award Committee and served as the emcee at the dinner, noted that Flint was part of the original team that established the UC IPM Program in 1980. Since then her passion and vision for ecologically based IPM has influenced almost every aspect of IPM in the state, he said.

Before introducing her, Borg said: “I want to put her work in the context that it deserves and to do that, we need to understand a little about the significance of California agriculture.”

“In 2012 California was the top agricultural state in cash receipts at $44.7 billion. Iowa was second at $31.9 billion. Using data from 2007, Paul F. Starrs and Peter Goin in their Field Guide to Agriculture (UC Press 2010) make the case, for $37 billion in cash receipts for California's crops represents an agricultural economy of between $200-$300 billion.” UC Davis Provost and Executive Vice Chancellor Ralph Hexter (left) chats with Charlie Hess, former dean of the UC Davis College of Agricultural and Environmental Sciences.
“In 2012, that would mean that California's agricultural economy is somewhere short of $400 billion or about 20 percent of California's gross domestic product (GPD). In 2012, California tied with Italy and Russia at 8th to 10th place in the world economy and is poised to surpass Italy and Russia to a solid 8th place in the world.”

He read a portion of the nomination letter by Michael Parrella, professor and chair of the UC Davis Department of Entomology and Nematology, that said: “Her name is synonymous with IPM, pest control alternatives, and public service, not just in California and the United States, but worldwide.” Parrella also noted that Flint “has been heavily involved in the leadership, creativity and success of UC IPM Program since 1982 and is UC IPM's longest-tenured employee.” Frank Zalom (left), former director of UC IPM and a former recipient of the James Meyer Distinguished Achievement Award, chats with Steve Meyer, husband of Mary Lou Flint.
Borg defined IPM as “an ecosystem-based strategy that focuses on long-term prevention of pests or their damage through a combination of techniques such as biological control, habitat manipulation, modification of cultural practices, and use of resistant varieties. Pesticides are used only after monitoring indicates they are needed according to established guidelines, and treatments are made with the goal of removing only the target organism. Pest control materials are selected and applied in a manner that minimizes risks to human health, beneficial and nontarget organisms, and the environment.” UC Davis nematologist Howard Ferris (left) talks with chemical ecologist Steve Seybold, an associate of the UC UC Davis Department of Entomology and Nematology who works with Mary Lou Flint on research projects.
In her presentation, Flint said that James H. Meyer (1922-2002), who served as the UC Davis chancellor from 1969 to 1987, is her father-in-law and that "it's a great honor" to receive the award. (Flint was hired to create IPM programs for agriculture, before she met and married the chancellor's son.)

The UC Davis entomologist traced her history with the organization. “I remember attending the California State Fair in the early 1980s and being somewhat horrified to find the UC Master Gardeners answering questions using the Ortho Problem Solver and the Rodale Guide to Organic Gardening,” she said. “I was told that they relied on these books because UC provided very little garden pest management information.” That helped motivate her to write “Pest of the Garden and Small Farm.” From there, she and her colleagues moved on to Pest Management Guidelines, Pest Notes, Quick Tips, UC IPM website, UC IPM kiosk, our YouTube channel, blog and Twitter.

Flint is the third entomologist (Frank Zalom, 2004, and Thomas Leigh, 1988) to receive the Academic Federation award, first presented in 1971. 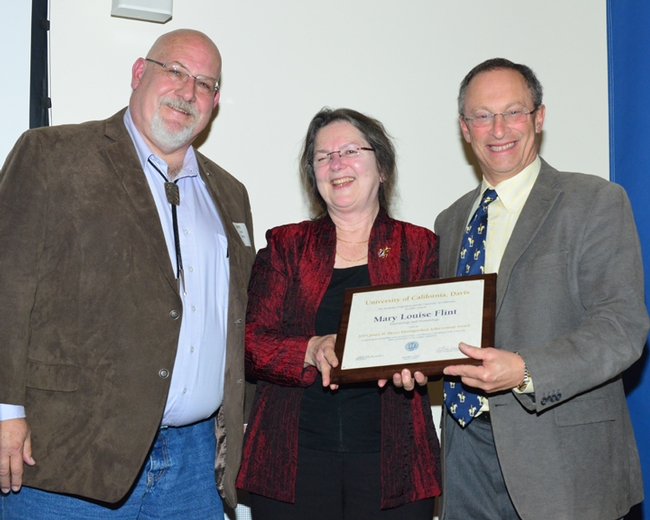 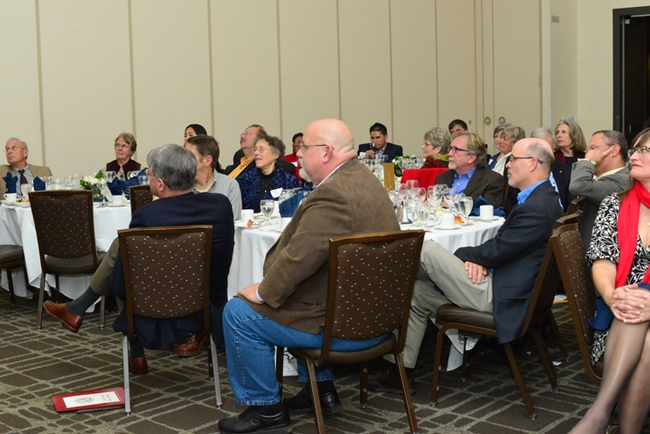 Born Feb. 15, 1933 in San Jose,  Dr. Maggenti attended St. Mary's College High School and, during those years, he achieved the Eagle Scout rank, Boy Scouts of America.  He obtained a bachelor of science degree in entomology and parasitology at the University of California, Berkeley in 1954 and then completed his PhD in entomology there in 1958.  His Ph.D. studies, conducted under the guidance of Dr. Merlin Allen, focused on the biology, morphology and taxonomy of the genus Plectus.

Immediately after his Ph.D. dissertation was submitted and accepted, Dr. Maggenti was appointed by Dr. Dewey Raski to the position of lecturer and assistant nematologist in the newly formed Department of Nematology at the UC Davis, where he served the remainder of his professional career.  He chaired the department from 1973 to 1978 and served as associate dean of Student Affairs between 1982 and 1987.  He retired in 1993 and was appointed emeritus professor of dematology.

Dr. Maggenti was known as an outstanding and popular teacher who effortlessly drew on his breadth of knowledge of the organisms of the phylum to illustrate principles of biology, ecology and parasitology. He enriched his lectures with anecdotes of the activities of his mentors and colleagues and of his personal research experiences. His Nematology 110 class, Introduction to Nematology, was especially popular with undergraduate students, despite the fact that it was an elective and met at 8 a.m.  Dr. Maggenti's reputation as a teacher was such that enrollment in the class regularly approached 100 students.  Twenty years after he last taught the class, former students regularly visit the Department of Nematology exhibits at the annual UC Davis Picnic Day open house to inquire about Dr. Maggenti and to introduce spouses and children to the world of nematodes.

Dr. Maggenti was a respected and valued mentor of graduate students; former students and visiting scientists frequently recall protracted discussions around the mid-morning coffee pot. For varying periods throughout his career, Dr. Maggenti taught Nematode Taxonomy and Comparative Morphology and a separate class on Principles and Techniques of Taxonomy and Morphology, as well as a significant portion of a class on the Biology of Parasitism.  During his career he received several awards for teaching excellence, including the James H. Meyer Distinguished Achievement Award and the Magnar Ronning Award.  He was elected Fellow of the Society of Nematologists in 1990.

Significant throughout his career: the impact of the many nematological luminaries with whom he had the opportunity to collaborate and interact. Those interactions were reflected in his teaching and his writing. Besides Drs. Allen and Raski, both honorary members and founder members of the Society of Nematologists, his early career development was strongly influenced during his graduate studies by Dr. Benjamin Chitwood who was working with E.C. Dougherty at the nearby Kaiser Institute in Richmond. His interactions with Chitwood included many late night discussions on all aspects of the evolution, systematics and biology of nematodes. In addition to the mentored projects of his several graduate students, Armand Maggenti published with Drs. Dougherty, Chitwood, Timm, and Croll. He collaborated with Drs. Fortuner, Geraert, Luc and Raski in the important 1987 and 1988 revisions of the suborder Tylenchina.

Besides his contributions to our theories and understanding of nematode phylogeny and the evolution of parasitism in the phylum, Dr. Maggenti worked on the control of plant-parasitic nematodes in strawberry and ornamental plant production.  His book entitled “General Nematology,” published in 1981, has been particularly useful for reference and teaching purposes; it is an excellent resource on the anatomy, morphology, life cycles and classification of the phylum. With his first wife MaryAnn Basinger Maggenti, who died in 2001, Dr. Maggenti co-authored the extensive "Dictionary of Invertebrate Zoology,” now published online.

Dr. Maggenti was an avid outdoorsman: a hunter and an accomplished fly fisherman. He is survived by his wife Joan; his sister; and  sons Timothy and Peter and their respective families.