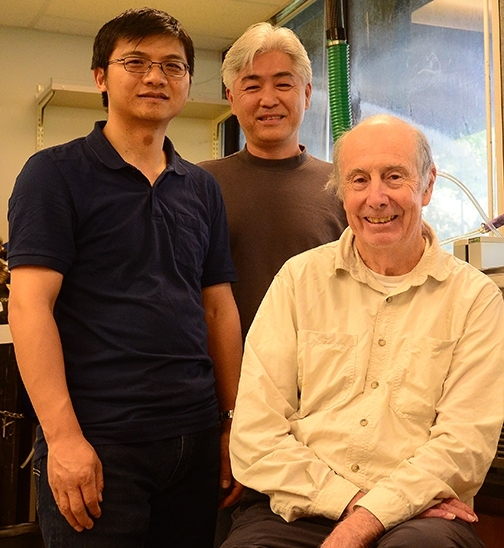 The grant, “Development of an Oral Analgesic for Neuropathic Pain," is funded by the  Blueprint for Neuroscience Research. National Institutes of Health (NIH).

The clinical trials, scheduled to begin in 2017, will target diabetic neuropathic pain, occurring in an estimated half of the world's 347 million diabetics, and 29 million Americans.

The compound “is an inhibitor of the soluble epoxide hydrolase (sEH) enzyme,” said Hammock, whose fundamental research on the developmental biology of insects led to the discovery. “It is a key regulatory enzyme involved in the metabolism of fatty acids and treats pain by stabilizing natural analgesic and anti-inflammatory mediators.” Alan Buckpitt, president of pharmacology
Now known as EC5026, the compound is “a potent, orally active and a non-narcotic analgesic that does not adversely affect the brain, gastrointestinal tract, or cardiovascular system,” said Alan Buckpitt, the company's vice president of pharmacology and emeritus professor of molecular biosciences at the UC Davis School of Veterinary Medicine. “The compound effectively treats pain in preclinical models at low oral doses with no apparent adverse or addictive effects. Preclinical studies demonstrate efficacy that exceeds current therapies for diabetic neuropathy.”

“We are really honored to have been the first company to enter directly into the clinical development phase of the NIH Blueprint Neurotherapeutics Network award program,” said William Schmidt, EicOsis vice president of clinical development. “Since this was a highly competitive grant, this demonstrates the enthusiasm that the NIH has for developing non-opioid therapeutic options for treating severe pain.  With the support and direct collaboration of outside experts in the NIH network, we look forward to advancing this novel type of analgesic drug into human clinical trials.” Current therapies for diabetic neuropathy pain are ineffective in more than three of four patients. “The EicOsis technology may solve a great need in pain treatment in providing a powerful analgesic which avoids the side effects of opioids (narcotics) and nonsteroidal anti-inflammatory drugs (NSAIDs),” said physician Scott Fishman, professor and chief of the Division of Pain Medicine, UC Davis Health System, who is not affiliated with the company. “The EicOsis compound holds great promise for controlling neuropathic pain in general and particularly for this difficult and common medical problem.”

Hammock said EC5026 and close analogs have already shown to be effective “against naturally-occurring moderate-to-severe pain in dogs, cats, and horses.” William Schmidt, vice president of clinical development
A goal of the Blueprint Neurotherapeutics Network is to discover, develop and generate novel compounds that will ultimately be commercialized and benefit humankind.

The $4 million grant will provide both financial support and shared resources for advancing the EicOsis compound through early clinical trials. The Blueprint for Neuroscience Research is a cooperative effort among the 15 NIH Institutes, centers and offices that support neuroscience research and accelerates discoveries through pooled resources and expertise. Cindy McReynolds, project manager
“The Blueprint program provides a team with decades of experience in fields ranging from formulation to registration,” said Peppi Prasit, CEO of Inception Sciences and an EicOsis advisor. “This depth is an enormous help to a small company.  Blueprint pays for the big ticket items along the path through Phase 1 clinical trials.  The ability to leverage this intellectual and financial support will make EicOsis an attractive investment.”

"The Blueprint has funded early drug development efforts in the past, but EicOsis is the first group in the nation to be funded in their advanced development phase," said EicOsis project manager Cindy McReynolds, program manager of the Hammock lab in the UC Davis Department of Entomology and Nematology.

EicOsis (pronounced eye-cosis), is described on its website, http://www.eicosis.com/, as a privately held Davis-based company developing a first-in-class therapy of a once daily, oral treatment for neuropathic and inflammatory pain in humans and companion animals. Hammock developed the technology for the lead compound. UC Davis licensed the compound exclusively to EicOsis. The company maintains a strong patent position with both method-of-use and composition-of-matter patents.

Hammock is a fellow of the National Academy of Inventors, which honors academic invention and encourages translations of inventions to benefit society. He is a member of the U.S. National Academy of Sciences, a fellow of the Entomological Society of America, and the recipient of the Bernard B. Brodie Award in Drug Metabolism, sponsored by the America Society for Pharmacology and  Experimental Therapeutics. He directs the campuswide Superfund Research Program, National Institutes of Health Biotechnology Training Program, and the National Institute of Environmental Health Sciences (NIEHS) Combined Analytical Laboratory.

Key mechanism that causes neuropathic pain found (July 7, 2015)
A biological process called endoplasmic reticulum stress appears to play a key role in causing neuropathic pain, according to a new study. The discovery could eventually lead to new therapeutics for controlling chronic pain associated with trauma, diabetes, shingles, multiple sclerosis or other conditions that cause nerve damage.

UC Davis to test experimental drug for laminitis in horses (VIDEO) (Nov. 14, 2012)
Veterinarians at the UC Davis School of Veterinary Medicine have announced plans to conduct the first clinical trial of an experimental drug that has shown promise in treating horses stricken with laminitis, an excruciatingly painful and often life-threatening foot-related disease.

Discovery could help combat chronic pain in diabetics (June 26, 2015)
Researchers at UC Davis have discovered a class of natural compounds found within the body that may someday lead to pain relief for millions of diabetics and others suffering from chronic pain.

Pest Control Research Leads To Pain Control Discovery (Sept. 1, 2006)
A newly discovered enzyme inhibitor, identified by researchers originally looking for biological pest controls, may lead to pain relief for sufferers of arthritis and other inflammatory diseases, say UC Davis researchers. The finding, hailed by a noted inflammatory disease expert "as the most important discovery in inflammation in more than a decade," may also reduce side effects associated with the painkiller, Vioxx.