The Great Depression arrived as Los Angeles was booming.  Oil was big business.  Automobiles had begun to transform the landscape.  The movie studios had come to Hollywood.  Industry was increasing throughout the Southland.  And Los Angeles County was the most productive farming county in the US.  At first, the 1929 stock market crash did not have much impact on the average Angeleno.  But quickly, unemployment rose.  By January 1930, a Los Angeles City Council resolution noted that “the unemployment situation is becoming more and more acute each day” (Leader, 1991, p. 4).  The situation grew severe in the months that followed.  Of 700,000 jobless people in California in June, 1932, fully half were residents of Los Angeles County (Kerr & Taylor, 1935).

Deprivation existed along side over-abundance and waste.  Farmers were unable to harvest all of their produce, often because they couldn’t afford labor, and enormous quantities of food were left in the fields as people went hungry.

One response of Los Angeles County residents was to organize into “self-help cooperatives”.  Unlike marketing cooperatives, self-help cooperatives were based on bartering labor for goods, for example, harvesting farmer’s crops for a share of the harvest.  Members were unemployed, often retired people who preferred to work rather than accept public assistance.  The first such cooperative was organized in Compton in 1932.  A year later 45 such cooperatives had been established in LA County.  The movement spread to other parts of the US, but was strongest in Southern California, especially Los Angeles County.   In 1934, there were 14,000 members of self-help cooperatives in LA County, about 10% of the total US membership (Panunzio, Church, & Wasserman, 1939).  Cooperatives usually had elected leaders, and were organized into area “conferences”.

Farm work and gardening were common components of the self-help cooperatives, although they encompassed a wide variety of activities, including bakeries, fishing, canning and more.  Typically, members worked 16 hours per week in support of their cooperative and its projects.  At the cooperative in Santa Monica, members worked at local dairies for milk and cheese.  They had an arrangement with the College of Agriculture at UCLA to tend the trees at UCLA's experimental farm in exchange for fruit.  The Huntington Park Cooperative had vegetable gardens on vacant land, harvesting more than 27,000 pounds of fresh produce in just one quarter of 1936.  Typically, cooperatives were able to find vacant buildings to use at no charge for meeting places, to store their bartered goods, and to conduct business.

Many cooperatives helped local farmers harvest their produce in exchange for a share of the harvest, often the “seconds” that were unmarketable.  Japanese farmers were especially receptive to bartering with the cooperatives for labor in exchange for food (Kerr & Taylor, 1935).

Through participation in these cooperatives, families were able to secure 60 to 75% of their food budget, and other supplies as well, such as second-hand clothes.  The movement’s slogan was “Self-help beats charity:  Charity is for abnormal people in normal times; we are normal citizens in abnormal times”. 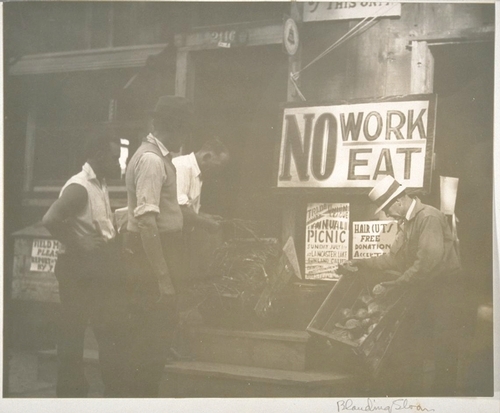 No Work, No Eat
Self-help cooperative in Los Angeles. Photo from the Bancroft Library, University of California, Berkeley 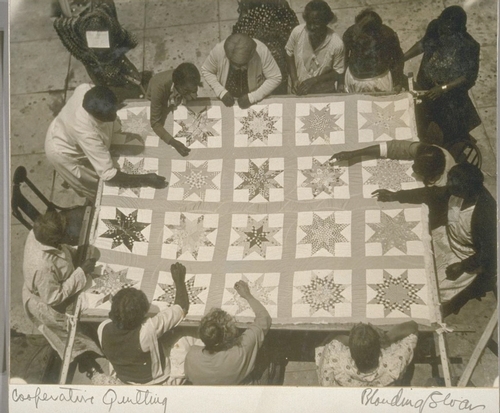