The trial took place in the Delta region on a Kingile muck soil. This soil classification is characterized as having upwards of 40 percent organic matter in the top foot of soil. On high organic matter soils in the Delta, the typical practice is drill-seeding. Water-seeding, which is the typical practice in the Sacramento Valley, is not successful in the Delta because the soil particles can float and move too easily, causing seed to get buried too deeply and germinate poorly. 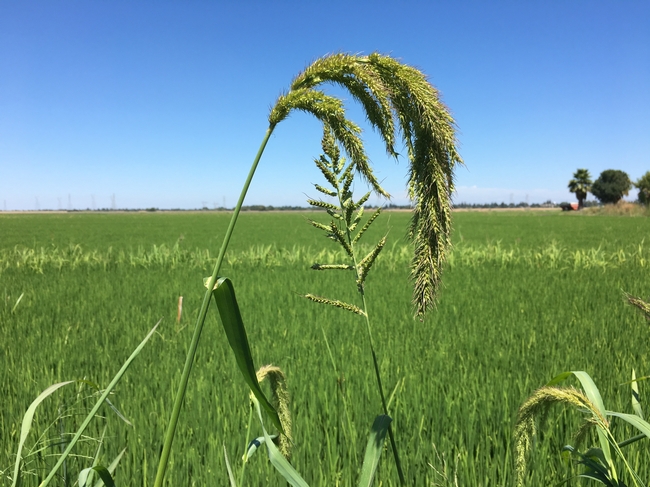 To say it has been a strange year would be par for the course. When don't we have a strange year anymore?! To say it has been a wet year, however, would be an understatement. According to the National Oceanic and Atmospheric Association, normal rainfall for the “water year” (October 1st through September 30th) is 14.06 inches for Stockton, CA. Last winter, we received 15.29 inches in Stockton from October 1st to April 11th. This year, we have received 20.75 inches to date.

With the high rainfall, we have received many inquiries about how to manage poor stands of alfalfa. Dan Putnam, UC Alfalfa and Forage Specialist, anticipated these sorts of problems early in the year and posted this article to the Alfalfa and Forage News blog. With this posting, I follow up with a Q&A of things I've heard and discussions I've had since that article was written. Remember that every situation has its unique set of conditions, and recommendations should be site specific.

1. There are poisonous weeds (e.g. groundsel, fiddleneck) in spots of the fields where the stand is poor. The weeds are not widespread, but they are no longer seedlings. What can be sprayed on these weeds?

Rachael Long, farm advisor in Yolo, Solano, and Sacramento counties, described these weeds and some treatment options in a recent article. In this particular example, where the weeds are not widespread and probably too big for effective herbicide treatment, an option could be to cut those portions of the field and get rid of that weed-infested hay. The rest of the field could be cut and baled as usual. Once groundsel and fiddleneck have been cut, they will have a hard time competing with the alfalfa plants in subsequent regrowth and cuttings.

2. A grower generally cuts a field for the first time around the first week of April. The stand was still pretty short at that time. If the grower stayed on his typical schedule, would cutting when the alfalfa is short stimulate growth, or would it be better to wait to cut?

If the field has poisonous weeds, as described in Question 1, an early cutting might be appropriate, especially if the weeds are widespread in the field. The grower could cut early to manage the weeds, and since the hay is short, the grower would not lose a lot of yield. If the stand is clean of weeds, however, it would probably be advisable to put off the first cutting. Letting the plants grow, and perhaps go to an early stage of flowering, would help the root system develop and strengthen the plants.

3. Many growers and consultants have heard that alfalfa produces autotoxins, which cause poor establishment of overseeded alfalfa. How long do the autotoxins remain in the soil?

Autotoxicity is the effect of a chemical compound released by plants of the same species. The autotoxic effect can last in the field as long as there are decomposing crowns. Once the plant material has decomposed, the autotoxic effect doesn't usually last. Remember that there is also general competition between older/bigger alfalfa plants and young seedlings. This is not related to autotoxicity, but rather to the fact that seedlings are small and weak compared to the strong, multi-stemmed crown of a mature alfalfa plant.

4. Does overseeding alfalfa ever work?

I previously wrote an article on overseeding older alfalfa stands, and Dan Putnam wrote this article on this topic. Growers may overseed older alfalfa stands with grasses or legumes to prolong stand life, but of course, this year has presented extraordinary conditions where growers are considering what to do with poor stands that are of varying ages – even seedling fields planted last fall! Generally, we wouldn't recommend overseeding unless the current stand has less than 6-10 plants/ft2. In a situation where that was the case, both Dan and Mick Canevari, emeritus farm advisor in San Joaquin County, have seen poor stands of seedling alfalfa be successfully overseeded under certain conditions, namely, the seed was drilled into the previous stand and was planted to moisture. Additionally, having the option of sprinkling up the newly-planted seed can help in successful establishment. Remember that overseeding can sometimes lead to complicated weed management. Consider your weed management program (for the old part of the stand and the newly-planted part of the stand) before going to the effort and expense of overseeding.

5. A grower applied a herbicide in December with a 12 month plant-back, according to the label. Now, with all the rain, the stand looks really poor, and the grower wants to take out the alfalfa and plant something else. What should the grower plant?

Remember, the label is the law. If the label says there is a 12 month plant-back, then what that means is that there could be phytotoxic effects to a subsequent crop that is planted within 12 months. Sometimes, however, the label may specify shorter duration plant-backs for certain crops. Be sure to read the label carefully.

Unfortunately, this is probably a collision of both problems, and neither has a great solution. For reasons previously described, there are not a lot of solutions for poor stands resulting from saturated conditions. Likewise, there are not a lot of solutions for fields having stem nematode, regardless of whether the soil is saturated or not. Stem nematodes cause most of their problems when soils are cool and moist. We notice their impact in the spring when regrowth is poor, as with shortened internodes and possibly white flagging of stems. Once conditions have warmed, stem nematodes recede deeper into the soil and tend to not be a problem later in the year. The ways we can deal with stem nematode are limited but include planting highly-resistant (HR) varieties and having good equipment sanitation between infected and non-infected fields.

7. A grower has an alfalfa field where a portion of the field is in very poor shape, but the rest of the field looks ok. What could this grower do?

Dan Putnam and I recently visited a field in the Delta where this was the case. In fact, it was the higher end of the field where the stand was basically decimated, but over the winter, there was pretty pervasive standing water in much of the Delta. In this particular situation, the grower produces the alfalfa for his own dairy and can manage the field selectively. The grower will probably disc up the end of the field where the stand is bad and plant sudan there. He'll bale the sudan and then plant alfalfa there in the fall. This option seemed amenable to the grower, but of course, every grower is going to have a different set of costs, buyers, and circumstances.

There is no “one size fits all” on these questions. Every situation will have a slightly different recommendation depending on the conditions. Even as the spring turns to summer, we may still see alfalfa fields dying back as a result of the wet winter we've had. Keep the questions coming, but let's hope we can move forward into a productive spring and summer!