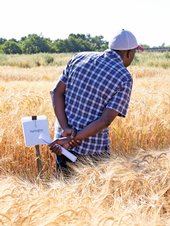 This is a reminder that the annual UC Small Grains/Alfalfa-Forages Field Day will be held on May 15th at the University of California, Davis Department of Plant Sciences Field Headquarters from 8AM – 4:30PM.

The event showcases UC efforts in breeding and agronomic research related to small grains, alfalfa and forage crops and is one of the longest running field days in the state. The schedule for the day is available

Save the dates for two upcoming UC field days to be held in April and May:

The South Sacramento Valley Wheat and Barley Field Demonstration Day will be held from 8:45 - 10:30AM on April 24th, 2019 in the Dunnigan Hills area. The program will feature UC small grain research on weed management, nitrogen management and variety testing. CUEs for Nutrient Management (0.5) and Integrated Pest Management (0.5) will be offered. Click on the above link for more information on the location and a schedule of topics to be discussed.

In addition, the annual Small Grains/Alfalfa-Forages Field Day will be held at the... 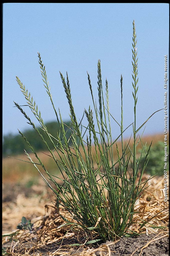 If growers sprayed for Italian ryegrass earlier this year, it might still be worth keeping an eye out for it in fields and field margins.

Italian ryegrass (Lolium multiflorum) is an annual grass that can sometimes behave as a biennial or short-lived perennial in California. The species is an upright grass (to about 3 feet in height) that germinates in the late fall and grows vigorously through the winter and early spring. The species can be identified by its dark green, glossy and hairless leaves that are rolled in the bud. Auricles are well-developed and the ligules are long and membranous. Once flowering occurs, ryegrass is easily distinguishable by alternating spikelets that run along the length of the main...

We hope you can join us for our field day!  Agenda and directions are below.  Contact Sarah Light with questions: selight@ucanr.edu ~ 530-822-7515.

After a relatively dry start to the rainfall season from October through early November, rainfall in California since November has been above average. About halfway through the rainy season, year-to-date precipitation totals are approximately 20-30% greater than the 10-year average in the small grain growing regions of California (Figure 1).

Growing degree days (GDD: 86F max; 45F min) for common wheat and other small grains have been accumulating more rapidly than the 10-year average since the middle of November (Figure 2), which has been primarily a function of warmer than average night-time temperatures (Figure 3).