For those of you who attended Steve Grattan's presentation at UCCE Monterey last week on managing salinity in vegetable production, you may recall he mentioned that strawberries in gypsiferous soils can tolerate a higher EC reading than the salt tolerance guidelines allow.  I wasn't quite clear about this, so I emailed about it and his answer concerning this is as follows:

"Crop salt tolerance is based on crops response to the electrical conductivity of the saturated soil paste (ECe). But in actuality, crops respond to the salinity in the soil water. These are different.

The field soil water content for many berries and vegetable crops is slightly above or below the field capacity. This means that about 1/2 of the pore volume in the soil is water and the other half is air. To make a saturated paste, distilled water (pure water without salts) is added to fill the extra pore space. Now if the salts in the soil water are largely sodium and chloride (very soluble), then the ECe would be about half the EC of the soil water in the field...which is what the crop is truly responding to. But if the soil contains a lot of gypsum (CaSO4), then by adding distilled water, more salts will become dissolved so that the ECe would be higher.

As an example, the literature indicates that strawberries can tolerate a maximum ECe of 1 dS/m, beyond which yields decline 33% for every 1 EC unit is increased beyond that. This was based on a chloride dominated water. Therefore, stawberries can tolerate about an EC of 2 in the field water. Gypsum has a maximum solubility of about 20 meq/l which is an EC of about 2 dS/m but this is just a generalization and can vary depending on soil chemistry. But for simplicity, if the salts were all gypsum (no sodium chloride) than if the soils had excess gypsum, the EC of the field water would be about 2 (no yield reduction). But to make a saturated paste, distilled water is added and more gypsum is dissolved so the resulting ECe is not 1 but remains at 2. Therefore an ECe of 2 dS/m is not growth limiting in this case.

The rule of thumb is that plants can typically tolerate a 1-2.5 dS/m higher ECe than the salt tolerance guidelines indicate in gypsiferous soils because of this relationship."

I'm thinking this could be a really good meeting for some of us to go to.  Lots of smart people from some really dry places talking about salt in the water and the soil and then how to manage it. Plus the meeting is in California.

Just had a great conversation with Mike Cahn, our Irrigation and Water Resources Advisor in Monterey County regarding the salt issues in the berry fields on the Central Coast.

The Basics of Salinity Measurement: Electrical conductivity (EC) is a measure of the combined effect of all the salts in the soil or irrigation water. Generally in irrigation water an EC of less than 1.5 dS/m is not known to present problems for growing strawberries. Strawberries can often tolerate water of EC above 1.5 if the main salts are calcium and sulfate. Soil EC thresholds for strawberry were based on a saturated paste extract from the soil.   A soil paste extract with an EC of 2 or 3 shouldn’t be seen as a big issue for strawberries.   Directly measuring soil EC with a probe (see the example in the photo below) will often produce much higher numbers than would be found from a saturated pasted extract because the salts are concentrated in less soil moisture.

There are different types of salt, and some are more harmful than others to the roots of the plant. One way of gauging how great the potential of harm a certain species of salt presents to the plant is how easily it precipitates out of solution – salts which stay in solution easily will tend to get taken up by the plant root when it pulls up the water while those which precipitate out are solid and not capable of being taken up by the plant root.

So, take for example calcium carbonate and calcium sulfate, which are both salts and matter of fact compose most of that white stuff we are seeing on the surface of the soil around here. This white stuff is a precipitate and as a solid won’t be taken up and no longer presents a danger to the plant root. Sodium and chloride on the other hand, stay in solution much more easily and therefore can also be taken up by the plant root. Moreover, since sodium and chloride continue to stay in solution even as water is evaporating away, their concentration rises and they become even more harmful to the plant roots and the plant itself.

Managing Sodium and Chloride: Fortunately, it’s pretty easy to leach away sodium and chloride from around the plant roots. One just needs to add more water to the soil than what is necessary for the plant. Since for example strawberry plants planted in autumn of 2013 are still quite small and the weather has been very cool (meaning low evapotranspiration), Mike estimates probably about a half to 1 inch is all they needed in the last month of December. Any water applied in excess of this amount will leaching away and carrying whatever salt is in solution .

Possible Salt Accumulation from Fertilizers: Since it would seem that harmful levels of sodium and chloride are being leached away by current irrigation practices, Michael and I focused our conversation on the possibility of nitrates from fertilizer – especially the pre-plants- being a major source of the salt damage that we are currently experiencing in our area. Because preplant N is applied in bands near the roots of the transplants and there is little uptake of N at this early stage of growth, nitrate released from the fertilizer may be increasing the salinity near the roots. We calculated that if 90 lbs of N/acre released from 2 bands of fertilizer on 52 inch wide beds, the salinity may increase in the root zone by 3.4 dS/m. During a typical year about 12 inches of rainfall will occur between December and March.  During a drought year, it is possible that the irrigation water applied is of sufficient volume to activate the pre-plant fertilizer but not enough to wash it away and so there is a consequent buildup of harmful nitrate (a salt) right around the root ball.

This will be worth looking into in the very near future. 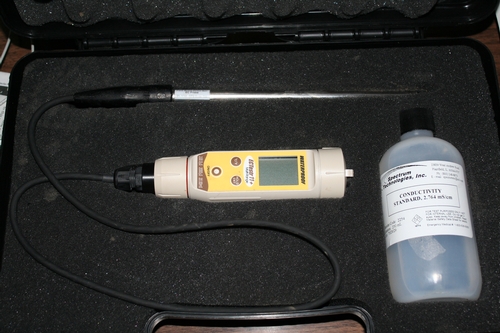 EC meter ready to go. See the post above for how to correctly interpret the results of these meters.
Tags: electrical conductivity (1), salinity (3), salt (11)
Comments: 4
Interesting Case of Salt in Coachella Valley
Published on: January 6, 2014

You may have noticed I've changed the title of this post.  I talked with Michael Cahn from UCCE Monterey and yes, that is salt on the surface of this soil, and its pretty impressive and all, but this stuff is pretty likely calcium carbonate or calcium sulfate which precipitate out pretty easily and present less harm to the plant than something like sodium or chloride.

So it's still a salt, but not one which is super harmful to the plants.  Lots of you are seeing this white stuff on the bed tops and furrows right now, again it's most likely calcium carbonate or calcium sulfate.  More to come on this subject later. 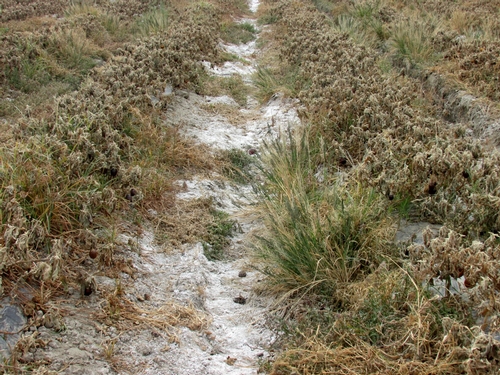 Just completed a full  diagnosis with UCCE colleagues Jose Aguiar and Steve Koike of some stunted strawberry plants depicted below from the Coachella Valley.  Steve's diagnostic lab found nothing, so we moved on to an analysis of the soil and tissue.

Same deal as what we have been starting to see up here; stunted plants, burnt leaf margins and dying plants.  I ran the samples through a lab test, and sure enough the soil EC for the dead plants is 3.5 dS/m, for dying plants 3.0 dS/m and soil from healthy plants 1.6 dS/m.  Seems the issue is one of a lack of volume and/or movement of water in the sick plots, because we see the easily leachable nitrates and sodium higher in the samples from the dead and dying plants (nitrates: 26 and 30 ppm; sodium: 345 and 299 ppm - yikes!) than from the soil around the healthy plants (nitrates: 9.7 ppm; sodium: 147 ppm).

Strawberry growers across the state need to keep running that water until we get some rain.  There is so much salt building up in these soils right now. 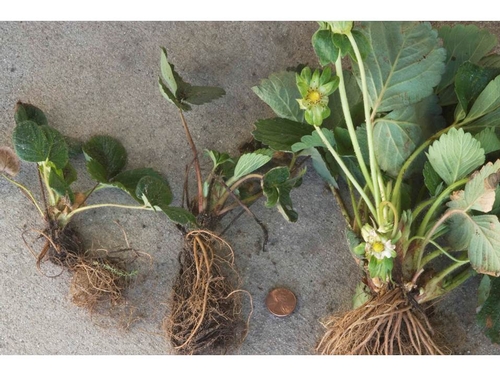