Saw this file shared on Twitter the other day, it comes from a presentation made at a talk for tech start ups.  What do you think?  Pretty crude characterization of academics, but still made me laugh pretty hard.  Sort of hard to deal with us University folk huh.

Have a nice weekend all! 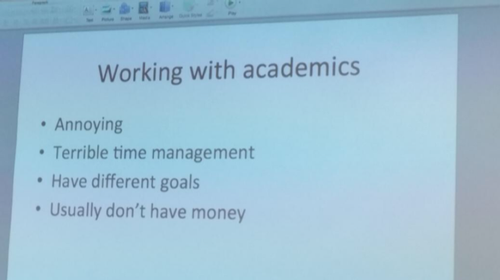 Great article here from Growing Produce about how researcher Hannah McIntosh out in Wisconsin obtained serious reductions in SWD in raspberries by underlaying the crop with plastic mulch (three colors tested: metallic, black and white).  All three colors worked in reducing SWD numbers by something like 50% (!!) and in some cases increased yields.  The researchers are thinking it has to do with increased UV interfering with the insects' navigation, grower feels the larvae are getting cooked on the plastic (I'm with the grower, but I'm going to wait for more data before firming up on this opinion).

This is pretty interesting and some good work.

Comments: 0
Strawberries in the Wall Street Journal
Published on: May 6, 2021

Good article here from the Wall Street Journal.  I provided a good amount of info to Jesse over the past couple of weeks, in particular walking her through some of the financials and cultural practices of the business.  There's some good discussion of what not only berry growers, but also veg people dealt with last March as the country went into lockdown and normal outlets for sales were closed.

Should be without paywall.

Introduction:  As of three years, Lewis mite (Eotetranychus lewisi) has become an issue in Central Coast strawberries, and to some extent on caneberries.  A key point to understand is that Lewis mite doesn't necessarily respond to the same control tactics twospotted spider mite does, which has given us some occasion to research how to control it.

The post below will outline a trial just recently finished in a strawberry field just outside of Watsonville.  I thank both the PCA and grower who generously allowed me to work in their field, and also were patient as the trial ran its course and potentially damaging populations of mites expanded.

Planting for trial was 'Monterey' variety in the first year of planting and in the early stages of growth at trial commencement.  No miticide or insecticide applications were made to trial plot during the course of the study, and on March 14, 2021 an aerial release of 23,000 adults per acre of the predatory mite Phytoseiulus persimilis made.  There was P. persimilis already in the trial plots however at the first sampling on January 18, 2021.

Applications were made with a gas powered Maruyama backpack sprayer with a handheld boom configured to cover top and sides of each strawberry bed sprayed.  Nozzles were T-Jet 8001 flat fan.  First application was done on February 18, 2021 and the second application, in this case only for Vestis and Agrimek, six days later on February 24.

Sampling, begun on January 18 and finished on April 14, 2021 was done approximately every week after the initial miticide application.  Sampling was of 10 lower mid-tier leaves (consisting of 3 leaflets), from which numbers of twospotted spider mite adults, Lewis mite adults, P. persimilis adults, and P. persimilis eggs were evaluated directly from the undersides of each leaf.  Eggs of twospotted spider mites and Lewis mites are difficult to distinguish from one another and thus were counted together.

Table 1 below gives an outline of the treatments and rates

P. persimilis data are not included, but available on request.

Numbers of P. persimilis eggs and adults were low through the most of the trial, ranging between 0 and 1.5 per treatment on average. Only in the last two evaluations on April 7 and April 14, did numbers of eggs and adults of this predator increase to a wider range of less than one up to 15 per treatment.   There was never any significant difference between numbers of adults in any of the treatments, and only on the last evaluation was there a significant difference in P. persimilis eggs.

On the last sampling date, in the case of Lewis mite adults, Oberon was significantly lower than all other treatments other than the Agrimek, and Agrimek was statistically equivalent to Vestis and Aza-Direct for this mite.  This was very similar to the result for twospotted spider mite, with Vestis, Agrimek and Oberon being statistically equivalent and significantly lower than the untreated control.

Growers, farm managers and PCA's should draw from this that Agrimek, Oberon and to some extent Vestis are offering good solutions to our current Lewis mite issue in strawberry.  While the lack of compatibility of Agrimek and Oberon is known for P. persimilis, it is not yet well known for Vestis.  However, that populations of these predators, albeit quite low in the early phase of this trial, did not vary statistically from other treatments indicates that perhaps this material is not overwhelmingly harmful to them. 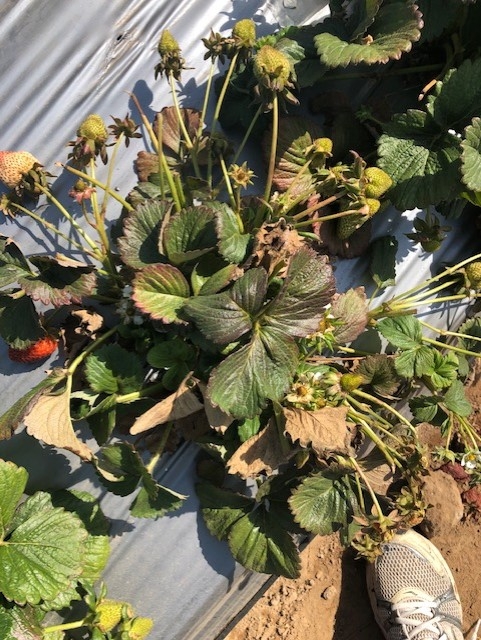 A strawberry plant heavily infested with Lewis mite in 2020. Shoe is my own. Photo by Mark Bolda, UCCE. 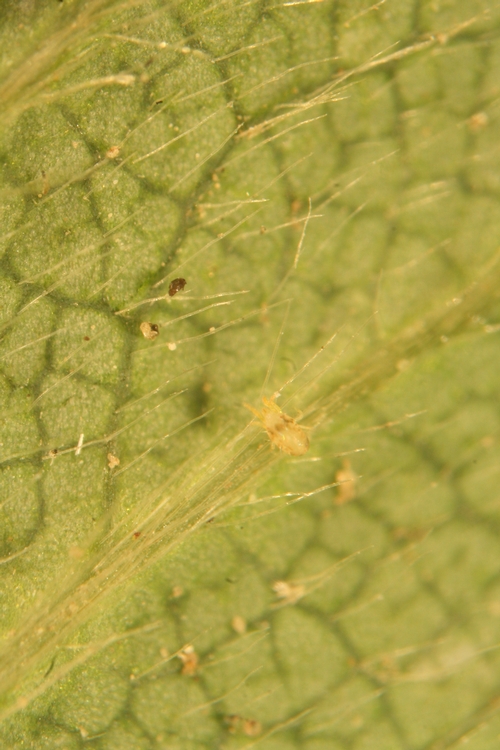 Lewis mite. Note spotting down the sides of the body, also crab leg posture of the legs. Photo by Mark Bolda, UCCE.
Comments: 0
Twospotted Spider Mite and Lewis Mite Side by Side
Published on: March 26, 2021

Finally got the shot of twospotted spider mite and Lewis mite close to one another in the same picture for comparison. I've shared this with others, but these two mites tend not to be found together, and rather form colonies on different parts of the leaf.

However, here we go.  Photography is mine, it's not great, but hopefully enough to help a bit.  More explanation in the caption below the photo. 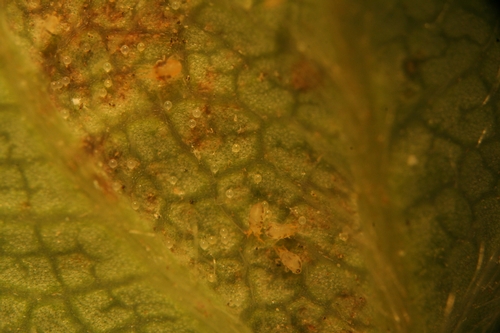 Twospotted spider mite at top, Lewis mites in the group of three toward bottom. Note the slightly larger size of the twospotted as compared to the Lewis. Markings are larger and more distinct for twospotted spider mite, and less so and running all along the side for Lewis.
Comments: 0
Next 5 stories >  Last story >>
Viewing 1-5 of 547
Recent Posts
This Is Just Hilarious
May 14, 2021
Plastic Mulches Prove Effective Against Spotted Wing Drosophila in Raspberries
May 12, 2021
Strawberries in the Wall Street Journal
May 6, 2021
Recent Comments
Mark Bolda: Whut
Consuelo: Hellebores
Mark Bolda: It got to the USA in 2012, just a...
jake: Yo Currently conducting an...
Top Tags
• strawberry • raspberry • LBAM • blackberry • light brown apple moth • nitrogen • spotted wing drosophila • strawberries • meeting • blackberries • chill • lygus • potassium • salt • cold conditioning
/ RSS / Podcast