California avocados often are exposed to high temperatures after harvest, either in the field or during preconditioning (ethylene treatment), especially in summer. It's been known that long periods of high temperatures can delay ripening time and reduce fruit quality, but a new study indicates pronounced effects after only short periods of high temperature following harvest. Authors of the study concluded that it's important to maintain avocados at temperatures below 25°C following harvest and that the ideal temperature to ripen the fruit is 20°C. The authors also found that ripening below 20°C resulted in significantly longer ripening times and resulted in poorer coloration of the ripened fruit.

Mary Lu Arpaia, UC Cooperative Extension specialist, Jim Sievert and Sue Collin, staff research associates (retired) in the Department of Botany and Plant Sciences at UC Riverside, working with David Obenland, research physiologist with the USDA Agricultural Research Service, Parlier, studied for two seasons holding avocados from multiple harvest times for the first 24 or 48 hours of the ripening period at high temperatures (20°C to 35°C), with and without ethylene. In the third season, they made a detailed assessment of ripening temperatures (15°C to 25°C) on ripening time and fruit quality.

Results from the first two seasons showed that even a 24-hour exposure to temperatures of 25°C and above inhibits ripening and increases postharvest disorders such as stem end rot and body rot. In season 1, the incidence of stem end rot increased from 9.7% at 20°C to 32.3% at 35°C, and body rot increased from 3.9% to 20.2% for the same treatment comparison. Ethylene applied during the exposure period was ineffective in preventing the disorders.

In the third-season trial, temperature was also shown to be critical. Fruit ripened below 20°C took slightly longer to ripen. Additionally, the authors found that the ripened fruit at either 15°C or 18°C remained more green then fruit ripened at the higher temperatures. Avocados ripened above 20°C were more likely to develop pink discoloration in the mesocarp. Ripening temperature had no effect on overall likeability, or ratings of grassy or rich flavor.

Photo:  Damaged fruit from the recent heat wave was more than 24 hours of overheating on  the tree 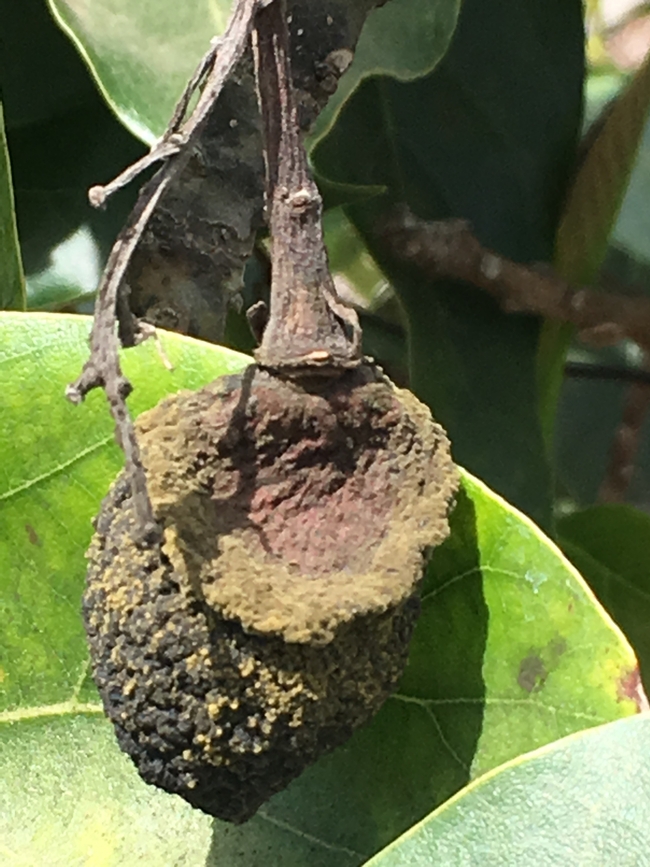