Italian ryegrass (Lolium perenne L. spp. multiflorum (Lam.)Husnot) causes yield losses in a variety of cropping systems around the world (Figure 1). This species is highly competitive with annual crops but may also compete with perennial crops particularly during the establishment years when they are most vulnerable to direct competition. In orchards and vineyards, ryegrass infestation can also interfere with cultural practices during the bearing years. Recently, poor control of Italian ryegrass with Gramoxone 2.0 SL was reported in a prune orchard near Hamilton City, California. Greenhouse dose-response experiments and field trials were carried out to evaluate Italian ryegrass response to several postemergence and preemergence herbicides.

Our greenhouse studies confirm that the Italian ryegrass population from Hamilton City is resistant to Gramoxone 2.0 SL, Envoy Plus, Roundup PowerMAX and Osprey, whereas Fusilade DX, Rely 280, Simplicity CA, Matrix and Poast controlled both a known-susceptible and resistant Italian ryegrass population (Table 1). (note: Osprey and Simplicity CA, which are not registered in perennial crops, were included in the study for comparison purposes). Our criteria were that whenever the resistance index (RI) was larger than two and the comparison between biotypes was statistically different (P <0.05), the population was considered as resistant to that particular herbicide. Matrix is an exception, however, because this herbicide controlled both biotypes at well below its recommended field rate.

The field experiment with postemergence herbicides corroborates with data from the greenhouse studies, since glyphosate and paraquat did not adequately control the herbicide-resistant population from Hamilton City. On the other hand, most of the treatments containing Rely 280 were effective for control of the resistant population (Figure 2). From the preemergence herbicide trial, all treatments containing Alion controlled the resistant population up to 150 days after herbicide application. Chateau, Surflan AS, GoalTender, Prowl H2O, and the tankmixes of Chateau + Prowl H2O and Chateau + Surflan AS exhibited control percentages above 90% with long lasting residual activity (up to 150 days after treatment; Table 2). Even though several postemergence herbicides controlled Italian ryegrass in our research, it should be noted that ryegrass populations resistant to Fusilade DX, Rely 280 and Poast have been reported elsewhere in the state (data not shown), and overreliance on these herbicides will increase the chances of selection of further cases of resistance. A chemical weed management program in areas infested with Italian ryegrass should include a preemergence herbicide with long residual sprayed in the winter (Alion, Chateau, Surflan, GoalTender or Prowl H2O are possible options) tankmixed with an effective postemergence herbicide. In areas where herbicide-resistant weeds are known to be present, alternative herbicide chemistries should be adopted (rather than increasing the herbicide rate sprayed) in both the winter and spring application. In some cases, a short residual grass herbicide included with the post-harvest burndown application may help reduce recruitment of early-germinating Italian ryegrass plants which will reduce weed pressure and densities to be managed later in the season. 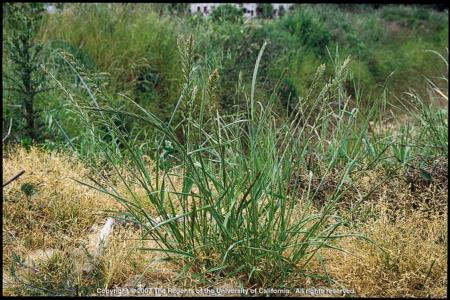