When Biocontrol Turns On You

When Biocontrol Turns On You

When a biocontrol agent turns on you, it can be painful. Recently a grower called in asking about an insect that had bit him when he picked it up. It caused a fearsome pain and some swelling. This insect is an assassin bug, one of the numerous predators out there that help keep pest insects in control.

Assassin bugs (family Reduviidae) belong to the order Hemiptera and the suborder Heteroptera, the so called “true bugs.”  Altogether, nearly 7,000 species of assassin bugs have been described worldwide, of which about 50 are native to California. All Hemiptera have tubular mouthparts with stylets that help them pierce tissues of plants and other creatures.  The stylets may also help them suck blood.  Indeed, 140 species of assassin bugs are specialized to feed on blood.  Spreaders of Chagas disease, these are the kissing bugs, so named because they frequently bite people on the face around the mouth.

Within insects, they are one of the third biggest groups of predators that mostly feed on other insects. This determines where they are found: many species sit on flowers or leafs, where they stalk or ambush their prey. Others like to hide in special microhabitats, for example, underneath the bark of trees, and feed on insects – such as certain beetle and fly larvae – that live under the bark.

In general, the greatest numbers of assassin bugs are found in wet tropical places around the world, but some also live in subtropical, arid and even temperate places.  About 50 species are native to California and the majority of them also occur in Southern California. In California, you can find different species of these bugs from the low deserts to fairly high elevations in the Sierras.  Altogether, we have fewer than 190 species recorded from the United States and Canada, but as you get into Central and South America, diversity increases and the species numbers go up.

A common species in California is the leafhopper assassin bug that is frequently found even in backyards around Riverside. It is widely distributed from Canada to Central America. Although it is native to this region, it has been introduced and become established in Chile, Greece and Spain. Leafhopper assassin bugs hang out on various plants and are beneficial – as are many other assassin bugs – because they eat pests that can be a nuisance to crops and ornamental plants.

The smallest are about 3 millimeters long.  The largest can be about 1.5 inches in length. As other true bugs, assassin bugs have “divided” wings, meaning that the forewings have a thick leathery texture close to the head and a more membranous structure further back. Assassin bugs can be recognized by the shape of the beak that is typically curved and pretty thick and has three segments.  The bug uses this beak to grab and hold on to its prey.  There is no need to panic when you see an assassin bug, but since they can inflict rather painful bites it is best not to touch them. Kissing bugs are somewhat unusual amongst assassin bugs in having a fairly slender and straight beak. Although their bite is painless in contrast to the bite of other assassin bugs, they are much more dangerous: their saliva can cause allergic reactions, and they can also spread Chagas disease.

The protozoan that causes Chagas disease, Trypanosoma cruzi, is not transmitted when the kissing bug bites you and sucks your blood.  Instead, it is transmitted soon after the kissing bug has stopped feeding blood.  When a kissing bug bites you, you don't feel anything at first because the bug injects an anesthetic and the bite will only get itchy shortly thereafter.  Now, after its blood meal, the kissing bug defecates. The feces contain the Chagas-disease-causing protozoans.  When you scratch, you get the feces into the wound and your blood stream. We have three species of endemic kissing bugs in California. Many of the specimens of our commonest species are to be found in Southern California; about 20-35 percent according to one of our studies, are infected with the protozoan and could serve as carriers. Typically, our native kissing bugs blood-feed on woodrats, but will also try to feed on other vertebrates, given the opportunity. In addition, dogs that sleep outdoors could also get infected with Chagas disease by eating the kissing bugs.

Persons who are bitten should wash and apply antiseptic to the site of the bite. Oral analgesics, such as aspirin or ibuprofen, may be useful to reduce the pain. Treatment by a physician is not usually needed, though Caladryl® or topical corticosteroids may help reduce swelling or itching at the site of the bite. As with any insect sting or bite, the victim should seek medical attention immediately if there is any sign of anaphylactic reaction, such as generalized swelling, itching, hives or difficulty breathing. 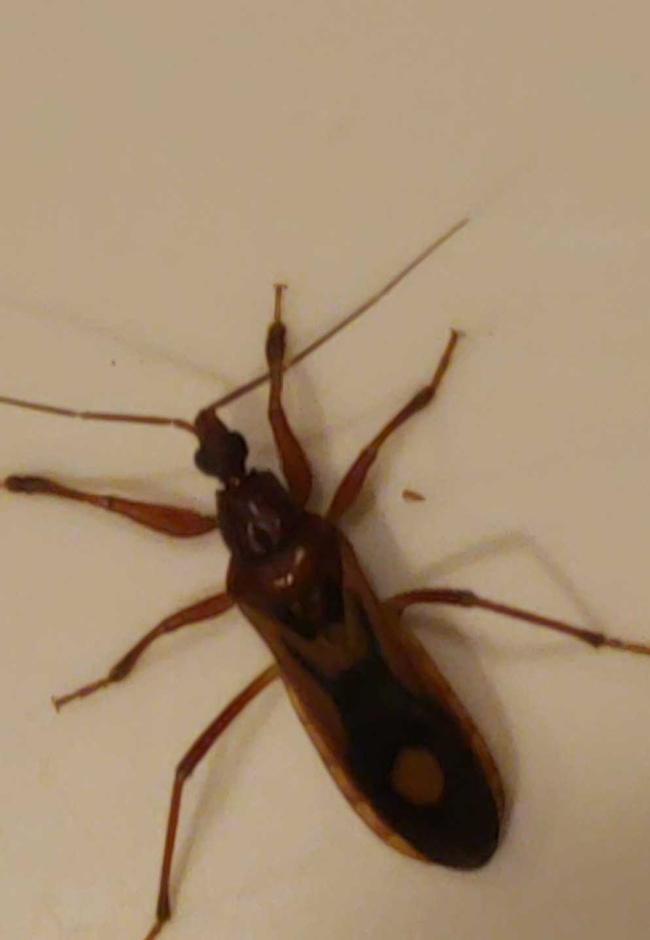