These little insects pollinate figs, but some figs are self-pollinated.

"There's no real way to tell from the outside, but if the fig contains seeds it will have been pollinated [by a fig wasp],” UC Extension specialist Louise Shanahan, based at the UC Davis Department of Plant Sciences, told writer Ali Francis of the magazine Bon Appétit in a Sept. 7, 2022 feature article, "What Do You Mean There Are Dead Wasps in My Figs?"

Now for the entomological side.

Fig wasps will be among the wasps discussed when the Bohart Museum of Entomology at UC Davis hosts an open house, "Weird and Wonderful Wasps" from 1 to 4 p.m., Sunday, Sept. 25 in Room 1124 of the Academic Surge Building, 455 Crocker Lane, UC Davis campus.  It's free and family friendly.

"Fig wasps are among the weirdest insects I can think of both in their obligatory relationship with plants and the strange looking males," said Lynn Kimsey, director of the Bohart Museum and a UC Davis distinguished professor of entomology. "Females are winged and wasp-like; males on the other hand spend their entire lives in the fig fruits and look really strange and are wingless and often look like they only have four legs."

Fig wasps belong to the superfamily Chalcidoidea and spend their larval stage inside figs. "Most are pollinators but others simply feed off the plant," according to Wikipedia. "The non-pollinators belong to several groups within the superfamily Chalcidoidea, while the pollinators are in the family Agaonidae. While pollinating fig wasps are gall-makers, the remaining types either make their own galls or usurp the galls of other fig wasps; reports of them being parasitoids are considered dubious."

Sunday's open house is the first open house of the academic year. The focus will be on a variety of wasps, including Asian giant hornets, aka "murder hornets," pteromalids, oak galls, and fig wasps, among others.

"At the wasp event, we will also have some photos from Dr. Ismail Seker, who earlier displayed his coffee table book on silk moths," said Tabatha Yang, the Bohart Museum's education and outreach coordinator. Seker, a Turkish-trained medical doctor, "has a book coming out on chestnuts next, but he is working on olives and figs as well," Yang added. (See Bug Squad blog on Dr. Seker's silk moth presentation at the Bohart Museum). Seker's son, Erkin Seker, is a UC Davis professor in the Department of Electrical and Computer Engineering.

Visitors are also invited to hold and take images of the insects from the live "petting zoo," which will include Madagascar hissing cockroaches and stick insects, also known as "walking sticks."

Visitors will learn about the smallest fairy wasps to the "murder hornets"; what role wasps play in plant galls and figs; and how to distinguish a parasitoid from a parasite. Kimsey will discuss the Asian giant hornet, Vespa mandarinia,  dubbed by the news media as “the murder hornet." The Entomological Society of America recently established as its official common name, “northern giant hornet.” 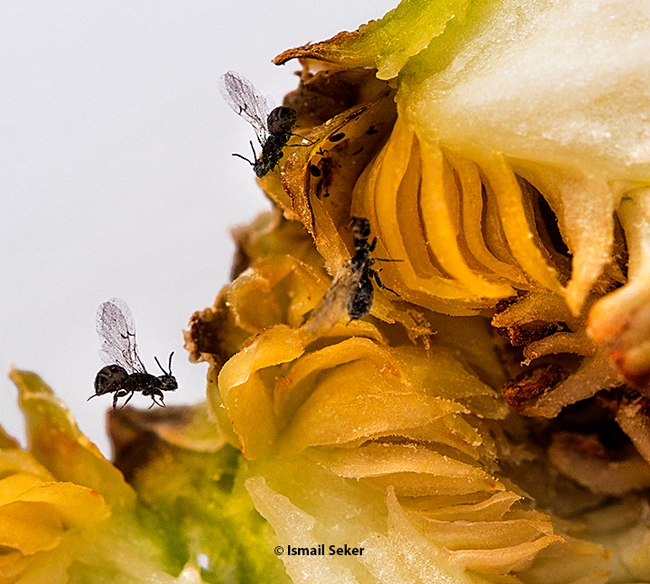