ANR news releases
sitenum=208
News releases from the UC Division of Agriculture and Natural Resources
Fire and California Forests: California Agriculture reports on the present crisis
Published on: May 1, 2015 Fire suppression and changing societal priorities have led to the predicament California faces today: Forests are overly dense and prone to catastrophic fire, the changing climate is likely to make both problems worse and forest managers have few tools to work with. Ironically, the hundreds of thousands of severely burned areas in the state's forests offer an opportunity to regrow a different type of forest. In the current issue of California Agriculture, the peer-reviewed journal of UC Agriculture and Natural Resources (UC ANR), UC Cooperative Extension advisor Susan Kocher presents new approaches to forest restoration that acknowledge current realities and anticipate the changing climate.

Outlook: Californians must learn from the past and work together to meet the forest and fire challenges of the next century

The latest issue of California Agriculture is devoted entirely to forestry, starting with the editorial on 100 years of forestry at UC Berkeley by College of Natural Resources Dean Keith Gilless. Other articles are listed below.

Fewer trees, more water, safer forests: The Sierra Nevada Watershed Ecosystem Enhancement Project is investigating how tree thinning — which is needed urgently in much of the Sierra Nevada due to long-term fire suppression — may increase the water yield from forested watersheds by as much as 10 percent. Monetizing this increased water yield, as well as other benefits from healthier forest ecosystems, could help fund forest management.

Forest thinning may increase water yield from the Sierra Nevada

Protecting oak woodlands: On California's North Coast, grassy oak woodlands are being invaded by stands of Douglas fir at an alarming rate. A UC ANR–led research team is working to understand the reasons why and guide efforts to reverse the trend.

Remote sensing: The powerful mapping capabilities of Lidar soon may be widely available to California forest managers as costs fall and the technology improves.

Forest carbon: Private forests that are harvested and regenerated yield approximately 30 percent more carbon sequestration benefits than if they are left to grow.

Post-fire ecology: Nearly 30 years after a burn at two sites in northeastern California, sagebrush had recovered fully and invasive grasses had diminished.

Community engagement: All sides of the Sierra Nevada forest management debate have learned from SNAMP. Can stakeholders help ensure research results are part of future management?

Ecosystem Restoration: A cooperative meadow restoration plan that successfully engaged a diverse group of stakeholders is a model for future projects.

The entire California Agriculture issue can be downloaded at http://californiaagriculture.ucanr.edu.

California Agriculture is a peer-reviewed journal of research in agricultural, human and natural resources published by the University of California Division of Agriculture and Natural Resources. For a free subscription, visit http://californiaagriculture.ucanr.edu, or write to calag@ucanr.edu. From left, UCCE staff research associate Chris Lee, NRCS forester David Casey and Yana Valachovic inspect the treated area for signs of sudden oak death.
University of California Cooperative Extension employees, who coordinate most of the sudden oak death-related research and monitoring in Northern California, got a surprise in the spring of 2010, when samples from a monitoring station near the mouth of Redwood Creek near Orick in Humboldt County tested positive for the pathogen. This meant that trees were infected somewhere in the 200,000-acre watershed – more than 50 miles from the nearest known infestation, and farther north than the pathogen had ever been detected in California.

Federal and state agencies, including the USDA Forest Service, CAL FIRE and the Natural Resources Conservation Service, joined forces with UC Cooperative Extension and quickly mobilized resources to control the pathogen in Redwood Valley and halt its spread to neighboring forests. Local landowners have also played a key role. Yana Valachovic pulls leaf samples to test for SOD.
Yana Valachovic, UC Cooperative Extension advisor in Humboldt County and forestry expert, explained that she and her agency partners had been preparing for this moment.

“We’ve been closely monitoring the disease for years and anticipating a scenario like Redwood Valley, so we were ready to take action and respond quickly,” Valachovic said.

The UCCE staff leads an extensive sudden oak death monitoring program on the North Coast, and one of their detection strategies involves "leaf-baiting" in streams. Using this technique, they “bait” Phytophthora ramorum, the non-native pathogen that causes sudden oak death, by placing susceptible leaves in strategic locations in North Coast streams. If the leaf baits become infected with SOD, the scientists know that the pathogen is present in the watershed without having to comb the landscape for symptoms.

After they detected the pathogen in Redwood Creek, UCCE acted quickly to pinpoint the source of the waterborne spores, scouring the watershed for the very inconspicuous symptoms of SOD with the help and permission of public and private landowners. By November 2010, the scientists had narrowed the location to Redwood Valley, where they found dead tanoaks and several other infected host plants. The bleeding is a sign that this tanoak is dying from sudden oak death disease.
Given its proximity to extensive public, private and tribal lands, the infestation in Redwood Valley was a serious concern. The disease, which was discovered in the Bay Area in the mid-1990s, is found in 14 coastal counties in California, from Monterey to Humboldt, and has infested 10 percent of the at-risk areas in the state. P. ramorum thrives in the coastal climate, and has killed over 5 million tanoaks and true oaks over the past 15 years. It’s still not clear how the pathogen got to Redwood Valley, but it could threaten the dense tanoak forests of the surrounding area, resulting in widespread tree mortality and increased fire hazard.

Much of the on-the-ground effort has been completed by contractors and CAL FIRE handcrews, who have created 100-meter buffers around infected trees by removing California bay laurel (pepperwood) and tanoak, the two hosts that most readily support P. ramorum spore production and spread. Infected plant material has been trucked offsite and donated to the nearby DG Fairhaven Power Company, piled and burned, or lopped and scattered onsite.

Funding from the American Recovery and Reinvestment Act, the USDA Forest Service and NRCS enabled the swift response in Redwood Valley. UCCE used ARRA funds, also known as federal stimulus funds, to hire four people to work on the project, lending stability to the effort.

“We couldn’t just stand back and let the disease roll through the forests that we manage, and the landowners understood that,” said Dan Cohoon, who works for Eureka-based Able Forestry, which manages many of the private forestlands in the watershed.

Brandon LaPorte, manager of Cookson Ranch and one of the key landowner collaborators in Redwood Valley, has supported the project from the beginning. LaPorte explained, “We’ve learned a lot about the disease through this project, and we certainly don’t want it getting worse here on the ranch or spreading beyond the valley.”

Ron Reed, a Yurok tribal forester, commented, “Oaks are an important part of our culture and history, and we will do what we can to keep sudden oak death out of our forests.”

The Redwood Valley project highlights the value of stream monitoring as a detection tool for SOD, but it also demonstrates the ability of agencies and landowners to collaborate swiftly and effectively to protect the region’s forest resources. Maybe most important – regardless of the future course that sudden oak death takes in the North Coast – is what the project shows about the ability of proactive communities concerned about the health of their landscapes to come together, attract the support of state and national authorities, and work to make things better.

The community collaboration is being honored with the Two Chiefs’ Award. The award, which is given jointly by the NRCS and the Forest Service, highlights projects from across the country each year, recognizing exemplary partners who have worked collaboratively to support conservation and forest stewardship. Kathleen Merrigan, USDA deputy secretary, will present the award and Valachovic will accept the award on behalf of the federal, state, tribal and private partners involved the project at an event in Davis on Wednesday, May 16. 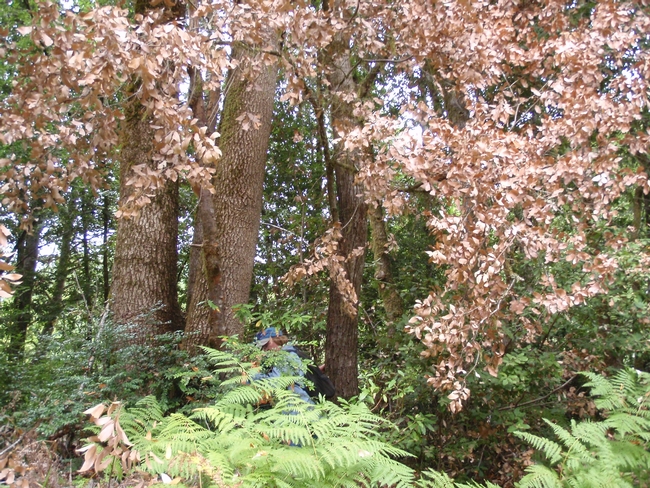 SOD has killed over 5 million trees in California.
Tags: forestry (3), sudden oak death (2)
Comments: 1
Workshops for landowners passing forests to the next generation
Published on: October 19, 2011

The University of California is hosting a two-part workshop series, “Ties to the Land,” to help forest landowners pass their land and its legacy on to the next generation.

The first workshop is being offered at 11 locations throughout California. All workshops will be held from 6 p.m. to 8 p.m.

“Family forests create many benefits through their stewardship actions, but the legacy can fall prey to the confusing details of land titles, permits, and inheritance if families have not crafted a succession plan,” said Bill Stewart, UC Cooperative Extension forestry specialist and organizer of the series. “This is especially true for owners who do not live in the county where their forest is. Their heirs have probably spent little time on the land and the lack of shared goals can become a problem.”

During the first workshop, participants will learn the steps needed to plan for passing land along to their heirs. An important first step in this process is clarifying the current owners’ goals and values for their family forest or ranch. This allows landowners to start the discussion with heirs about their long-term vision for the property. Participants will also learn about the financial impacts of ownership transfers across generations.

This first round of identical workshops is being held before the holidays, to allow time for families to get together during the winter holidays and discuss their goals. Locations and dates for the first workshop are as follows:

Registration for the workshop is $25 per family to cover costs of the family workbook and DVD. Multiple members of each family are encouraged to attend both workshops and can attend the workshop location nearest to them as the curriculum will be the same.

To register for the workshop or for more information on locations or the workshop series, please see the University of California Forest Research and Outreach website http://ucanr.org/tiestotheland. 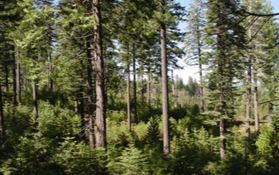