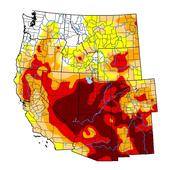 January and February of 2021 were some of the driest months on record, with near Zero (1.7”) precipitation in Northern California. Things don't look good for summer. What can alfalfa growers do under these conditions?

Drought Coming. Currently much of the Southwest US is under ‘extreme' to ‘exceptional drought', depending upon the region (Figure 1). A key issue for many regions is snow pack – which currently is at about 60% of normal. Although we've had some recent precipitation, the trend is for relatively low rainfall for the rest of the month of March. Allocations of surface water to the large irrigation districts are scheduled to be a...

NO COST TO ATTEND

Get ready for a half day of forage research demonstrations and educational presentations in the field and in the classroom.  The meeting will begin early morning and finish through lunch.