It's Time to Start Planting Your Winter Vegetable Garden
Published on: September 6, 2022

Even though you may still be harvesting loads of vine-ripened tomatoes, peppers and other summer grown vegetables, in September it's time to make room for winter garden vegetables. If you delay, you may miss the chance to harvest full-sized heads of broccoli, cauliflower, and Romanesco.

Gardeners who make the mistake of waiting until the tomato plants have stopped producing ripe fruits before planting broccoli, cauliflower, or Romanesco seedlings are often disappointed by the results. When planted too late, these winter vegetables crops may produce only small “button-sized” heads, a phenomenon known as “buttoning." To produce full-sized heads, the plants need to grow plenty of large leaves while day-time temperatures still are well above 70 degrees and daylight hours have not diminished. The robust leaves are necessary to supply sufficient photosynthesis to energize the plants to produce full-sized heads.

When crops are planted too late, the plant leaves are still too small to create sufficient energy when the plant begins to produce the immature flower stalks that will eventually be harvested as a head of broccoli, cauliflower, or Romanesco. Consequently, the heads that are produced remain small.

So don't delay. It may be time to remove the squash or bean plants and substitute one or more of these brassica plants. In Contra Costa County, broccoli, cauliflower, and Romanesco can be planted as early as August and as late as mid to late September. The crops should be placed in the garden as sturdy seedlings. If you want to start your own seedlings from seeds instead of buying seedlings from a nursery, plan to start even earlier. You will need about six weeks to grow the seeds and harden up the plants to be ready to go into the garden. Be sure to provide good cultural care for the seedlings since any type of stress can also cause the plants to button.

When you put the seedlings into the garden, it would be a good idea to cover the plants with shade cloth or light-weight row covers. An internet search for “garden row covers” or “garden shade cloth” will help you find places to buy the covers. And a second search for “how to make hoops for row covers” will lead to videos and articles that show you simple ways to support the covers. Choose a row cover that will allow at least 70% of the sunlight to pass through so that the seedlings will receive sufficient sunlight to grow robustly.

The row covers will help protect the seedlings from the high daytime temperatures that many areas of the County receive in September. An added bonus is that the row covers keep the cabbageworm butterflies away from the seedlings so that they cannot lay eggs on the leaves that will quickly hatch into caterpillars with voracious appetites for the plant leaves.

If you miss the August–September window for planting, don't give up on growing brassica vegetables this year. Kohlrabi, cabbage, and kale are more forgiving and can be grown successfully if seedlings are placed in the garden in October.

Incidentally, September is also the time to plant seeds to grow carrots, beets, parsnips, and other root crops. No room in the garden? Containers work well for all the root crops.

Worried about using water for a winter garden during a drought? Keep in mind that you should always have plants growing in your garden beds to maintain healthy soils. After summer crops are removed, you can grow cool season vegetables or plant cover crops. Cool season crops use much less water than summer crops. A vegetable plant that is 2 feet wide growing in Pleasant Hill needs 2 gallons per week in July, but a vegetable plant of equal size needs less than half a gallon per week in November and even less in December and January. With cooler fall and winter temperatures and a good layer of mulch below your winter crops, even occasional rain can keep the soil moist and provide the needed water.

For guidance on growing cool season crops, use this website and click on the crop you want to plant: https://cagardenweb.ucanr.edu/Vegetables/

For advice on managing pests and diseases affecting your crops, use this website and click on the vegetable name: http://ipm.ucanr.edu/PMG/GARDEN/veggies.html 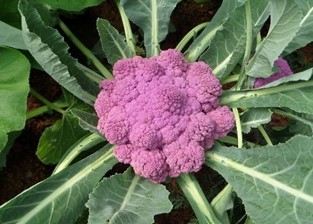 Help Desk Client:  I've just bought a home in the County. It has an extensive garden with many different plants. I moved from Southern California where I didn't have to worry about frosts. I have Oleander, Escallonia, Breath of Heaven (Colonema pulchellum), Myrtle (Myrtus communis), You can find more information about frost tolerance by referencing reliable sources on the web such as UC web sites and books such as Sunset's Western Garden or Sunset's web site (www.sunset.com). Just be sure you've zeroed in on your local conditions for climate.

I think all of your plants mentioned above should tolerate frosty weather just fine, but newly planted shrubs will be at more of a risk because their root systems have not yet become established.

Some of the tools to protect your tender plants include frost cloth, sheets, blankets, lights and stakes or framework to hold covers off foliage. Frost cloth has the advantage that, because it allows light and air to penetrate, it can lay directly on foliage and can stay on the plants for a few days at a time. You can find frost cloth at a local nurseries, most home/hardware stores or online. Plastic is not usually recommended to cover your plants; plastic is not a good insulator and can cause more damage, especially if it touches the foliage. However, use of plastic over a frame could work; Ruth Bancroft Gardens in Walnut Creek uses such frames to protect their vulnerable plants. When frosts or freezes are forecast, make sure your plants are well watered (not a worry if we've had rain recently). Cover plants before sunset to capture any heat radiating from the ground. If you use sheets or blankets instead of frost cloth, remove them the next day when the temperature gets above freezing.

Historically, Central County (Walnut Creek) averages a low of 39 degrees, but has gotten down much below that for extended periods in some years. West County usually stays warmer while East County can be similar. However, there are many microclimates throughout the County depending upon elevation, exposure, etc. so you must check out your particular situation. For example, in Walnut Creek in November 1985 it was 25 degrees; December 1990, 19 degrees; and Jan 2007 it dropped to 20 degrees. As you can see, the possibility for real cold exists, but is not likely in any one year. If any of your plants suffer damage from frost this winter, wait until spring to prune out dead growth when all danger of frost has passed and new growth begins.

Here is a link to a publication from the UC Sacramento Master Gardeners about frost protection where you will find even more information and photos of how to cover plants:  http://sacmg.ucanr.edu/Frost_Protection/ , Pictures are from SacMG document.

Please let us know if you have any more questions. Stay warm!

Note: MGCC's Help Desk closed Dec 19th, 2016 through Jan 2, 2017. However, the  UC Master Gardeners Program of Contra Costa's Help Desk is usually available year-round to answer your gardening questions.  Except for a few holidays, we're open every week, Monday through Thursday for walk-ins from 9:00 am to Noon at 75 Santa Barbara Road, 2d Floor, Pleasant Hill, CA  94523. We can also be reached via telephone:  (925) 646-6586, email: ccmg@ucanr.edu, or on the web at http://ccmg.ucanr.edu/Ask_Us/ MGCC Blogs can be found at http://ccmg.ucanr.edu/HortCoCo/ You can also subscribe to the Blog  (http://ucanr.edu/blogs/CCMGBlog/). It's winter. At least, it is according to the calendar. In places like Colorado, Minnesota or Ohio, along the northern US, temperatures hover in the 10's and 20's and snow is on the ground.   However, here in my part of Contra Costa County, and the southern half of the US, the daytime temperatures range in the 50's and 70's, and there's not too much snow to speak of, except along the mountain ranges.

It's hard to reconcile the maps and data with the gardening advice found in magazines like Sunset, Mother Nature, or Organic Gardening. In fact, it's just plain hard to know how to garden at all in this weather.

Last year, I had a wonderful winter garden. Everything I planted grew and produced. This year, I am looking out my window at a forlorn garden. The lettuce and greens drowned in December rain and never bounced back. The broccoli Raab has already bolted, my artichokes, which were cut back, have begun to grow already, and my Kiwi, which was a no-go this summer due to the intensely hot summer temperatures, has now begun to leaf out in places.   All this is happening months' earlier than it should.

How is your winter garden growing? What have you found helpful in this warmer winter? I would love to hear from you; success stories or failures -- all are welcome. Having lived most of my life in the Pacific Northwest, my frame of reference for the gardening season was this: in the spring, gardens were planted, then from May until September, things would grow, berries were picked, various crops were harvested, apples and pears ripened, pumpkins and other gourds were ready for Halloween picking, and then it was done. The gardens were shut down and left fallow for the winter. It was a very finite time, and unless someone was that rare warrior gardener willing to take on cold frames, ice and snow, and freezing temperatures, gardening ceased until the spring, when the cycle would begin again. Once the weather turned in early October, residents hunkered down to eight months of cold, wet and rainy weather (27 to 48° F, and 78.63 inches of rain, give or take a tenth of an inch).

Contrast that against Contra Costa's winters of coolish days sandwiched between cool mornings and crisp evenings. Today's temperature is a high/low of 65°/46° F.  For some of us that live here, its feeling a bit nippy and we want to wrap up and hunker down inside like our Oregon counterparts (to a Portlander, though, 65° is considered balmy, and a great excuse to wear shorts; its not unusual to see Portlanders walking around with shorts, boots and a down vest in the winter).

Although it's understandable to want to hunker down and wait until early spring to begin the garden, we have perfect weather for growing cool season crops. In many ways, a cool season garden is easier to tend to than a warm season garden because: My garden currently contains Romanesco, broccoli raab, and cauliflower. I grew them successfully last year, along with some spinach and lettuce varieties, and I am looking forward to enjoying them again this year.

The Romanesco is a vegetable that I hadn't heard of until last year, and I am enthralled by it. It's not only a delicious-tasting vegetable, but also a beautiful work of art, with its vivid lime green color and perfectly spiraled fractals. It is known as either Romanesque Cauliflower or Romanesco Broccoli, and is of the Brassica oleraceaspecies.

If you haven't tried a Romanesco yet, here is a recipe for Broccoli Romanesco with Sage Browned Butter for you to try, hoping that once you taste it, you'll want to grow it. Romanesco starts are available at local nurseries. Our Garden in Walnut Creek offered Romanesco veggie starts for sale this year before the end of the season.   Look for them again next year.

Other plants that do well in the winter/cool season garden are: