A blue oak stands in a vineyard. The bat echolocation microphone and yellow sticky card (to sample insects) at the top of the telescoping pole are attached to a vine post at the edge of the tree canopy.

Californians love their oak trees. During vineyard development, Central Coast grape growers often feel compelled to leave an old iconic oak standing, even if it ends up right in the middle of their vineyard. While driving through the Central Coast, it's not unusual to see the pattern of vineyard rows broken by a majestic oak tree. Aside from their beauty, what are some of the ecosystem services that these majestic trees provide? 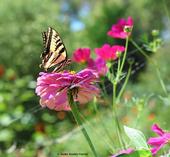 Addition to catching insects in flight, pallid bats also hunt on the ground for prey, such as crickets, grasshoppers and scorpions.

California is in the middle of the Pacific Flyway, a major north-south flyway for migratory birds, and also bats, that extends from Alaska to South America.

“Every autumn, migratory bats, such as the Mexican free-tailed bats, travel to their overwintering grounds in Southern California and Mexico, where there's plenty of bugs to eat; they come back each spring to raise their families,” said Rachael Long, a UC Cooperative Extension advisor who studies bats.

Bats are beneficial because they feed on insects, including mosquitoes and pests such as codling moths that damage fruit and nut crops. The

Bats are voracious predators of night-flying insects that target California crops. Research statistics show that a pregnant or nursing female can consume as much as two-thirds of her body weight in insects per night. That's somewhat like a 150-pound man eating 100 pounds of food per day.

UC Agriculture and Natural Resources researchers, together with UC Davis, are launching a survey to better understand the value of bats (and birds) on managed lands. The...