Now is the time to start thinking about which delicious vegetables you want to grow in your garden. Ted and Rho will go over all the possibilities with you in this class.

These vegetables don't mind the cold and can be planted from seed in February. They may grow slowly, but as weather warms they will grow more quickly. Lettuce, Swiss Chard, arugula, mustard greens, and other leafy greens do well. Radishes, beets, carrots, turnips, and happy during this time as well. However, by late spring/early summer, many of these plants can't take the heat and may “bolt,” sending up flower stalks that the bees enjoy.

You can plant these vegetables from seed or transplant in late March. They prefer warm weather and may “sulk” and grow very slowly if you plant them too early. These vegetables include melons, squash, winter squash, corn, tomatoes, and cucumbers.

Hope to “see” you there! Advanced stage blossom end rot. (Jack Kelly Clark)
While out harvesting your tomatoes this season, did you notice any fruits that had round, sunken, water-soaked spots on the bottom?  This is a common disorder called blossom-end rot.  As the name implies, it always occurs on the blossom end of the tomato, opposite the stem end.  You'll often notice it after a few very hot days

The first symptom is usually the appearance of a small spot at or near the blossom scar of green fruits.  As the spot enlarges, the affected tissues dry out and become light brown to dark brown.  The area then develops into a well defined sunken spot, with the tissues collapsed and leathery.  The spot can grow large enough to cover the entire bottom half of the fruit.  The skin remains unbroken because it is the tissues beneath that have dried out and collapsed.  The disorder not only affects tomatoes, but can also occur on peppers and squash. While the fruit looks unappetizing, you can still eat it - just cut out the affected part. Zucchini rotting from blossom end rot. (Robert D. Raabe)
Blossom-end rot is not caused by an insect or disease organism, so fungicides and insecticides will not work to control the problem.  Instead, blossom end rot is caused by a number of environmental conditions, especially those that affect the supply of water and calcium in the developing fruits.  When rapidly growing plants are suddenly exposed to hot, dry conditions, insufficient water is absorbed by the plant's roots and water and calcium are not transported up to the rapidly developing fruits.  This results in blossom-end rot.  Anything else that reduces the ability of the tomato plant to take up water will also increase injury due to blossom-end rot.  For example root rots, nematodes, lack of aeration due to soil compaction, overwatering, underwatering, overfertilizing, high soil salinity and root damage caused by cultivating too close to the plant may all contribute to the disorder.

There are several things you can do to prevent the calcium deficiency, and blossom end rot.  First, water deeply, and on a regular schedule, especially during hot weather.  Use a soil-covering mulch around your plants to conserve moisture, especially if your soil is sandy.  If you are growing tomatoes in containers filled with a porous potting soil, you may need to water the plants every day during hot periods.  When cultivation is necessary, it should not be too near

the plants nor too deep, so that valuable water absorbing roots remain uninjured and viable.  The best way of preventing the disorder is to maintain adequate and uniform soil moisture in the root zone throughout the growing season.

Stay tuned for an announcement about an upcoming in person class in August! In the meantime, fill out our Ask a Master Gardener survey http://ucanr.edu/ask/ucmgstanislaus and attach any applicable photos. In the meantime, remember to sign up for our next class, Pest Management in Vegetable Gardens. As with all our online classes, it will be recorded and later posted to our channel. Get answers to commonly asked questions such as:

We hope to see you there! Ripening tomatoes. (Pixabay.com)
Spring is here which brings thoughts of all the wonderful produce for the avid vegetable gardener. Of course, of all the produce that can be grown here in the Central Valley, the tomato may be the most popular crop grown in the back yard garden. Tomatoes are botanically a fruit (berry), as they are the fleshy fruit produced from a single flower with one ovary. However, in 1893 the US Supreme Court ruled them a vegetable because they are not eaten as a desert. The USDA also recognizes the tomato as a vegetable.

Fruit or vegetable, there is no doubt to the popularity of the home-grown tomato, picked fresh off the vine and appreciated for its tasty flavor, health benefits and beauty. Growing heirloom tomatoes has recently become more popular, with the various colors, shapes, and sizes.

The first year I started my tomatoes from seed, I was not sure how many seeds would germinate. I planted 3-4 seeds in each cell. To my surprise, most of them grew. I was challenged to thin them and keep the most vigorous ones, so I transplanted most of them into their own cell and grew about 450 tomato plants.  I was very popular that year with co-workers and family as I shared the bounty. Heidi and her tomato transplants. (A. Aufdermaur)
The great thing about starting your tomatoes from seed is how many varieties are available that may not be sold in the nursery. However, new gardeners are encouraged to purchase plants from the nursery to transplant into the garden with great success. Tomatoes need 4-6 weeks to grow from seed, so you'll probably want to purchase yours from transplants from a local nursery or garden center. Next year, you can start tomato seeds in winter to plant in spring.

Tomato plants are also an easy plant to grow in containers. The important thing to remember when choosing a tomato plant is its growth habit. The two growth habits are determinate and indeterminate.

Determinate tomatoes grow to 3-5' tall, set fruit within 4-6 weeks and then begin to decline. They are a great choice for container gardening. Indeterminate tomatoes are more like a vine, as they grow, flower, and set fruit the entire season. They need a sturdy support and grow best in the ground. For more information about growing this tasty produce, join the UCCE Stanislaus County Master Gardener presentation, ‘Tips for Terrific Tomatoes” on April 20. 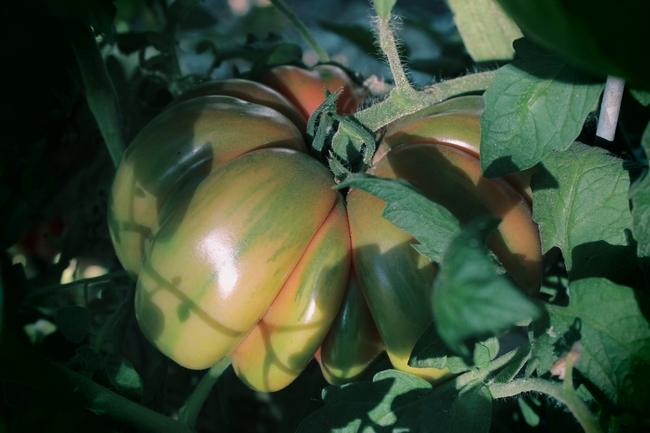