Soil pH or the “acidity” or lack of acidity of a soil can be confused by the different uses and chemistries that surround the term pH, or the power of hydrogen. This can be further confused by the terms “alkalinity” or “basicity” of the soil or the soil solution which can further confuse the situation by whether the solid or liquid phase of the soil is being measured.  So, in short, a soil is acid if it has a pH below 7 (more hydrogen ions) and basic when above 7 (fewer hydrogen ions).  Big numbers are more basic, small numbers more acidic.

The natural world has a pH scale of 1 to 14. Knowing soil pH is important because it can tell you the inherent fertility of a soil. Usually the higher the number between 5 and 8, the more “basic” nutrients are present, like calcium, magnesium and potassium.  When the numbers get lower than 5 and larger than 8, the nutrients may not be there or they may be tied up.  Changing the pH can often release nutrients that are not available. Iron and zinc plant deficiencies are most often controlled by soil pH and once pH is neutralized or made acid, the deficiency disappears.  In a way, pH is one of the most important nutrient indicators of a soil's fertility and managing should be an essential practice. Soils that have an elevated pH, those above 7, are usually dominated by carbonate and most commonly this is calcium carbonate. As a rock, we call this limestone which is derived from sea shells or coral. As a mineral, it is called calcite.  And in various manipulated forms it is called,calx, lime, calcium hydroxide, calcium oxide,calcined lime, quicklime.  Maybe other names, as well, depending on how it is made and used. Mixed with quartz sand it is made into glass.  When an acid is added to calcium carbonate, like citric acid, sulfuric acid or rain water (yes pure rain water is acidic), the reaction gives off carbon dioxide and water. (When you respire, burning sugar which is a form of carbonate, you do the same thing, giving off CO2and H2O). When calcium oxide or lime is mixed with water and left to harden, it forms cement when it absorbs carbon dioxide from the air.  So, lime, limestone and calcium carbonate are not very soluble.  But it does dissolve. Calcium carbonate is a salt and dissociates into calcium ions and when surrounded by water molecules, the carbonate becomes bicarbonate ions.  When the water dries up, the bicarbonate becomes carbonate again. A soils report may refer to this cement as “free” or “diffuse lime”, indicating that there is a lot present, and it may even be possible to see the old shells there.

A soil that is dominated by calcium carbonate is called a calcareous soil. It is the carbonate that defines the soil, it has an elevated pH, usually between 7.5 and 8, depending on other minerals in the soil (minerals are naturally occurring chemicals).  A high pH leads to plant nutrition problems.  It's not until the soil is acidified to drive off the carbonate as carbon dioxide that the pH will drop and the nutrient deficiency disappears.

One of the problems with the word “calcareous” is that it can be interpreted as meaning dominated by calcium.  A soil or water analysis may reveal high levels of calcium and this can lead to concern.  Calcium is a base cation, necessary for plant and human growth.  In western states, water and soil tend to have calcium as the dominant cation, balancing anions like sulfate and carbonate and in some cases chloride.  The important character to look for, though, is the carbonate or bicarbonate in the soil or water. It's not the calcium that is controlling pH, it's the carbonate.  Very commonly calcium is said “to reduce the acidity of soil.”  But it's not the calcium, it's the carbonate.

So, does this seem like a big semantic problem, how many dancing on the head of the pin sort of debate? No, because one of the most common recommendations for correcting an alkaline water/soil is to add gypsum – calcium sulfate.  In a calcareous soil, calcium is already present, so adding more calcium is not going to change it, but rather increase it. Sulfate does not displace carbonate.  Carbonate just stays there because calcium carbonate is not very soluble.  Remember it is cement.  Actually, adding gypsum is adding more salt which has its own problems - leading to saline soils.

So, this blog all came about because two different people asked me about correcting iron deficient avocado trees in calcareous soils (or a carbonateceous soil as I call it), with gypsum. pH correction is not going to occur with gypsum. An acid needs to be added to drive the carbonate off as carbon monoxide and then the pH comes down.  So, you use acids or elemental sulfur that converts to sulfuric acid or urea-sulfuric acid fertilizer, or long-term use of acid fertilizers like ammonium sulfate or organic mulches that gradually create acid conditions.

Soil acidification as a practice is a separate subject all together that needs to be discussed, but gypsum is not normally a part of the process of field acidification. Does that mean gypsum does not have a place in soil management?  It does, just not in the case of calcareous soils. And even though you can see bags of lime and dolomite (calcium-magnesium carbonate) on store shelves, for sure don't use that in the calcareous soils of California.

Photo:  old shells in the soil 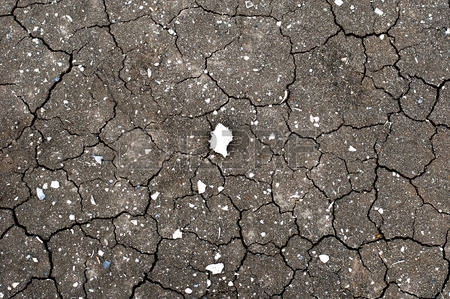 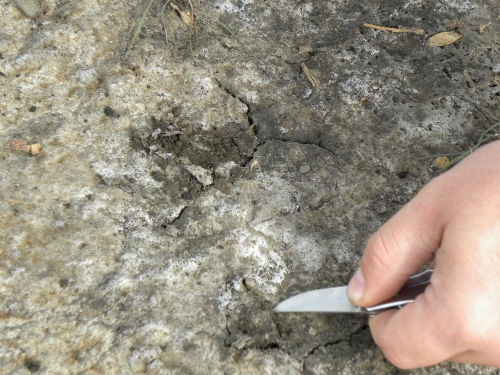