Installing a Tensiometer to Make Sure it Works
Published on: June 15, 2017

A tensiometer is one of the most wonderful devices for figuring out when to water plants.  It works equally well in orchard and garden situations.  It follows the soil moisture content as it is depleted by the plant and will tell you when it is time to rewet the root zone.  If, you monitor it faithfully.  If you don't, it can give erroneous results. If you are not watching it, it can go dry and give a false reading.  That should only tell you the reader to pay more attention to the plant's water needs.

It's actually very reliable if it is installed correctly.  And once it is and maintained it can give good results for years.

Of course there are many ways to monitor soil moisture and the water needs of plants.  A shovel, auger or trowel are incredibly accurate devices if you get down and dirty.  The tensiometer allows you to stay clean, at least for soil moisture monitoring.

This is a reminder of the complexity of huanglongbing and the bacterial infection it causes.  This abstract is from the HLB Conference in Florida last fall.

4.a.5 Symptom variations and molecular markers that illustrate the HLB complexity

Huanglongbing (HLB) is a devastating bacterial disease of citrus worldwide due to its intracellular and systemic infection. Various HLB symptoms are observed on different species/varieties of citrus plants: from yellow shoots to blotchy mottle on the leaves, from vein yellowing/vein corky to mosaic/green islands similar to zinc deficiency on the leaves, from whitish discoloration to stunted green leaves, etc. These variations of symptoms, which result from a combination of biotic and abiotic stresses, are not only present on individual plants from a variety but also exist on individual branches of an infected plant. Our results indicated that the adaptation of the bacterial populations, such as the dynamics of ‘Candidatus Liberibacter asiaticus' (Las), plays an important role in the induction of various symptoms and that Las mutations as well as the number and recombination events of Las prophages/phages affect this phenomenon. In addition, the selection of the host plants (resistance/tolerance) for the bacterial populations is also critical for symptom expression during disease progression. Based on severity, we divided HLB symptoms into four grades. It is worth noting that the grades of HLB symptom severity show a positive correlation with our newly identified biomarkers from host plants, and that gene expression profiling of different grades of infected leaves rationalized the differentiation based on the dynamics of these biomarkers. Because of these findings, we propose new approaches that allow for rapid selection of variant citrus plants, including bud sports with greater HLB resistance/tolerance.

Non-Technical Summary: Various symptoms of citrus huanglongbing display in different species/varieties of infected citrus plants. These variations of symptoms are not only present on individual plants from a variety, but also exist on individual branches of an infected plant. We have identified some molecular markers from the citrus plants and Las pathogen that illustrate the HLB complexity. Therefore, we propose new approaches that allow for rapid selection of variant citrus plants, including bud sports with greater HLB resistance/tolerance. 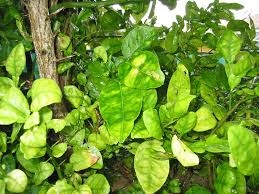 A call from a small grower, surprised at the sudden decline of the avocado trees. It must be a disease was the grower's thought. Well driving up to the site, there were numerous trees with canopies indicating drought stress. In fact most of the trees looked like they had had the water turned off. When I got to the orchard, all the trees had a similar look (see photo below). The fringe of the canopy had turned brown/red where the leaves had collapsed rapidly, while the interior leaves were often still green. All the trees had a similar cast. It turns out the water district had required a cutback just when temperatures were going into the 100's. NO water, no cooling effect of transpiration and the outer fringe of leaves collapsed. This is called the “clothesline” effect. It's like a sheet on a clothesline where the margins of the sheet dry first and gradually the body of the sheet dries. The same thing happens in a canopy. The outside leaves are the first to dry out and then the rest of the canopy goes. When you see a whole orchard go down suddenly, that does not fit into a disease pattern. There's usually an epicenter where it starts – where it's colder, wetter, dryer, hotter, more overgrown, etc. and spreads out from there if it is going to spread.   It turns out that the automatic irrigation system had gone down and the grower hadn't noticed until too late. When you see reddish tinged leaves, it means the leaves went down fast. When they are brown, it means they slowly went down over weeks or months.

With all the dead points in the tree, it is now open to disease – twig/leaf blight caused by one of the Botryosphaerias. These decay fungi are everywhere in an orchard decaying organic material on the orchard floor. With the dead material in the tree, now the tree becomes a potential feast for the fungi. The dead stuff has to come out, or the fungus will start eating into the tree. I suggested that instead of pruning out all those little points of death, that they cut back the whole canopy to major scaffold branches. In doing so, it would rapidly and cheaply remove the dead material and reduce the water demand. 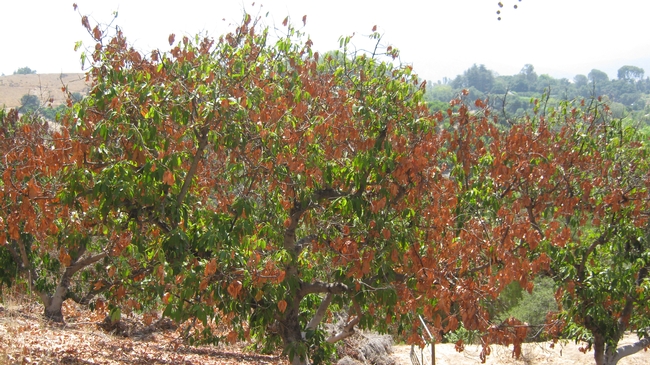 Avocado Heat Advisory Temperatures are forecast to be in the triple digit range throughout much of the southern California avocado growing region beginning Sunday June 19 and extending into Tuesday June 21. The National Weather Service (NWS) is predicting maximum temperatures between 100 and 110 degrees with similar heat index readings away from the immediate coast for Ventura and Los Angeles Counties. In Riverside, San Diego and Orange Counties, NWS predictions are for 95 to 105 degrees in the valleys, and 105 to 113 degrees in the inland empire and high desert.

To ensure that California avocados maintain their superior quality it is imperative that growers manage their trees and harvest their fruit according to the best management practices as outlined below.

IRRIGATION Growers should be irrigating their trees now, in advance of the heat, to ensure that their trees are fully hydrated. An additional 50% of the budgeted amount of water is recommended to be applied the day before a heat wave. For extended heat waves, daily pulses of irrigation are recommended to maintain the trees' water status. A well-watered tree will tolerate the stress of a heat wave much better than a tree that is suffering from water stress. Signs of heat damage to trees include fruit drop, shoot damage, leaf burn and in severe cases leaf drop.

Field bins should be placed under the trees while being filled to protect the harvested fruit from sunburn. Once filled, bins should be moved to a shade structure (open-sided roofed building), or covered with bin covers or light-colored tarps if they cannot be immediately transported to the packinghouse. Never leave filled bins exposed to the direct sun. The surface layer of fruit can easily heat up to more than 15 °F above ambient temperature when exposed to direct sun. Acute sunburn will only show on fruit after it is packed and is a major quality detractor.

To avoid water loss and decreased fruit quality do not hold fruit too long after harvest. Transport fruit to the packinghouse at least once per day, if not twice daily. Bins should not be left in the grove for more than 8 hours after harvest. Cover bins during transport to avoid sunburn and to reduce water loss. 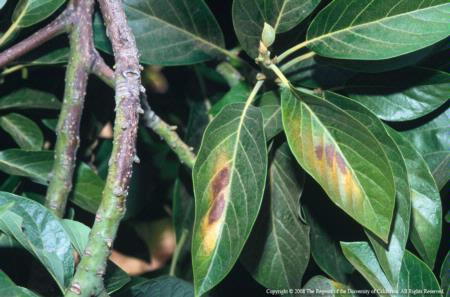 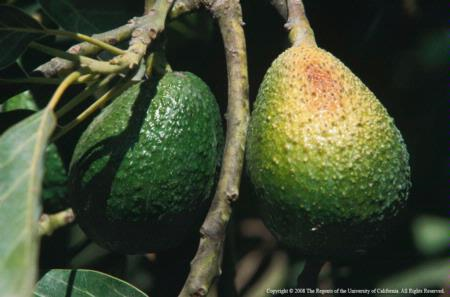 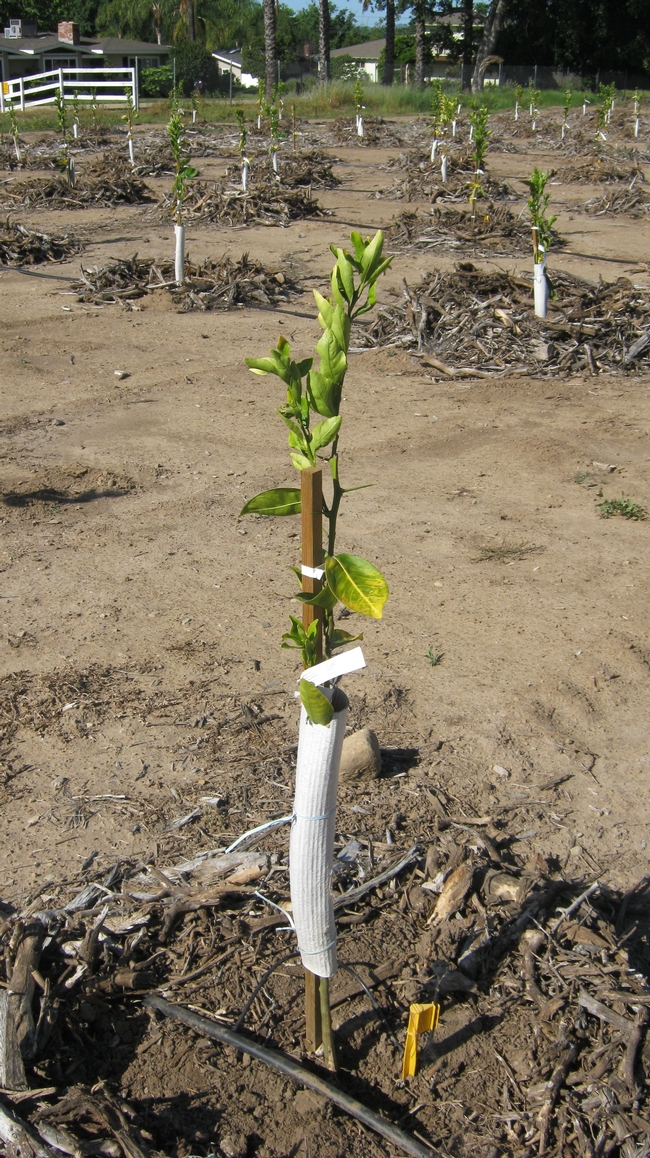 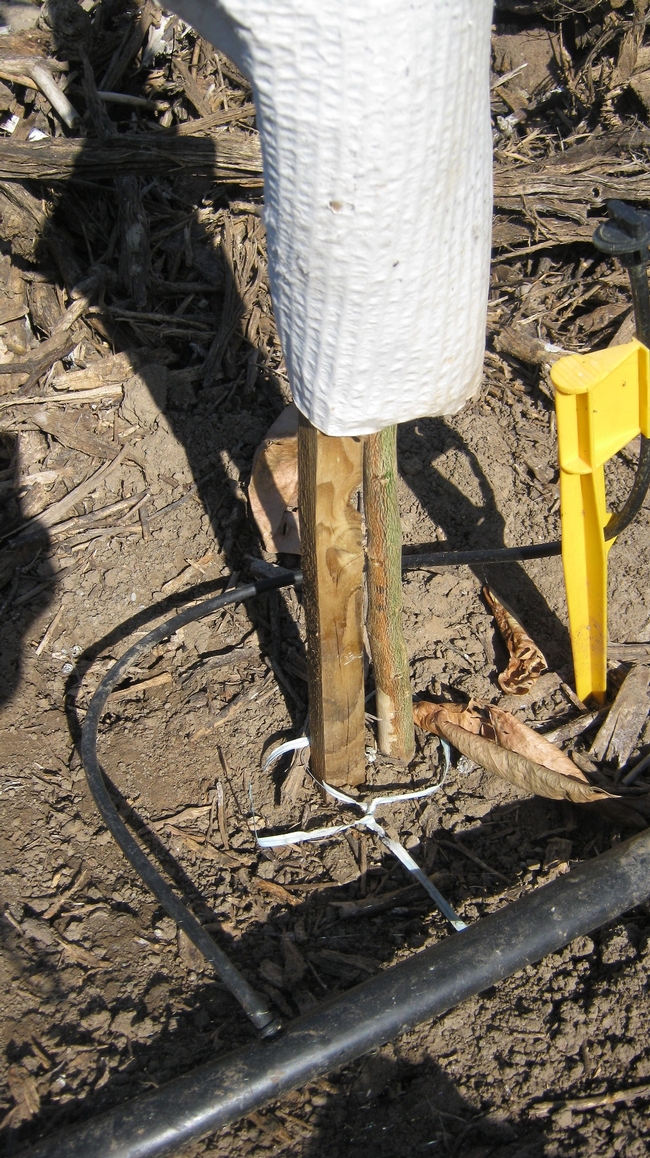 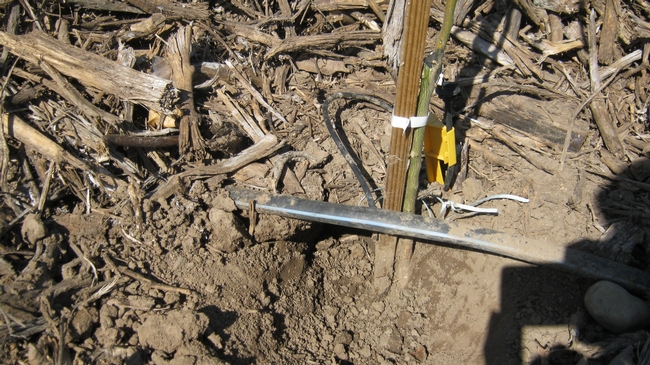 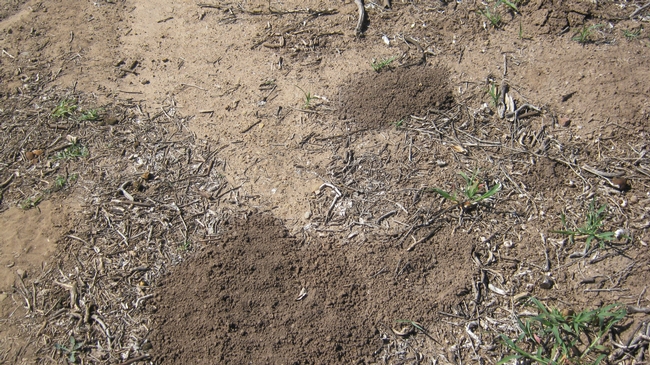 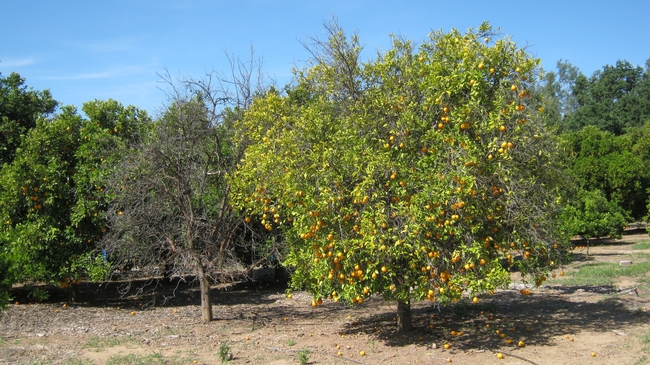