Species that move into new areas are known as adventive, but the word has several shades of meaning. Some scientists include deliberately introduced species, but others include only those that arrived on their own or by accident.

Some writers use adventive to describe species that are not self-sustaining, but need an occasional population boost from their homeland. If an adventive species becomes self-sustaining in its new geographic area, it is then said to be naturalized. Other words with variable meanings such as acclimatized, immigrant, and invasive make the subject even more confusing. One of the impacts of climate change is the movement of organisms, following favorable environments, and naturalizing in a new location that has the environment it needs to thrive.

Rusty Burlew of HoneyBeeSuite raises this issue of what to call organisms that arrive in a new home like California and how to classify them – “Are Stingless bees moving north?”.

While humans were busy squabbling over the border between the United States and Mexico, a tiny black immigrant bee was discreetly homesteading in California. A new sighting of a Central American native bee, a member of the genus Plebeia, was recently reported in a genteel area of Palo Alto, some 500 miles to the north of Mexico.

Apparently, the manager of the Elizabeth Gamble Garden, an iconic public park, contacted a company for help in removing a bee nest from the premises. On seeing the nest, however, the exterminator sent a specimen to an entomologist who recognized the bee as Plebeia. Plebeia is one of many genera belonging to the tribe Meliponini, commonly known as the stingless honey bees.

Until this sighting, only one stingless bee colony was known to exist north of the Mexican border, a nest that was first discovered in a Palo Alto backyard in 2013 and was being monitored by the State of California. Plebeia is a small genus of heat-loving bees native to southern Mexico and Central America that ranges as far south as Argentina. Since the first sighting in California, at least three other photos of Plebeia have shown up on the citizen science site iNaturalist.org, all within a short distance of the original nest. These recent sightings are most likely descendants of the 2013 colony.

No one knows where they crossed the border or how they got so far north. Someone could have smuggled them in, or perhaps they hitched a ride in a shipment of goods. It is also possible, though highly unlikely, they traveled on their own over the course of many years. In any case, higher than average annual temperatures no doubt played a role in their survival. 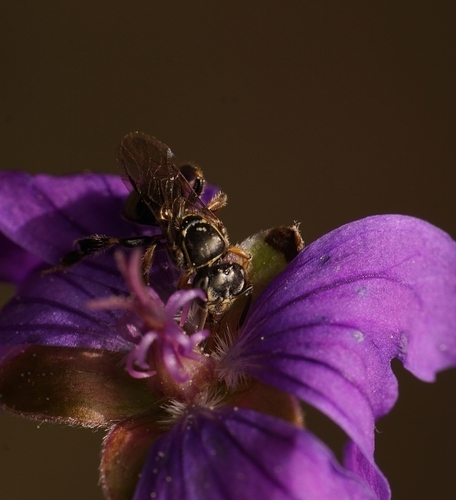