The Clegg Collection: A Valuable Resource
Published on: January 16, 2015

Department of Botany and Plant Sciences, University of California, Riverside

An unusual population of avocado trees may soon suffer the same fate as many commercial orchards elsewhere in California: its water supply will be cut off and the trees fed to a wood chipper.  And yet these trees (Fig. 1) potentially hold a key to the avocado's future:  they are the cornerstone of scientific research at the University of California, Riverside, aimed at unravelling the genetic underpinnings of agricultural traits and at placing avocado breeding on a molecular footing.

It is well known to plant breeders that the traits observed in a promising selection are rarely transmitted to its offspring.  This is because the so called phenotype (what you see or measure) is a poor predictor of the genotype (the underlying genetic machinery). Unfortunately, for breeding to make any progress, phenotypic traits need to have a genetic basis. Traditional breeding, which cannot distinguish between phenotype and genotype—only works because it starts our with a large pool of trees and, by chance, ends up with a few selections that show promise as future cultivars.  In avocado, the selection efficiency of traditional breeding is in the order of 0.1-0.2%; in other words, only 1–2 promising selections are recovered for every 1000 trees that have been laboriously (and expensively) screened over the course of a minimum of 5–10 years. Clearly, a better understanding of the relationship between phenotype and genotype  would make the breeding process more efficient.

Recognizing this need, Professor Michael Clegg of (then) UC Riverside established a carefully designed experimental population of avocado trees, later known as the Clegg Collection. It consisted of over 200 progeny from a single cultivar Gwen mother tree, and each progeny tree was clonally propagated four-fold, taking the total number of trees to ca. 800.  The seedlings were grafted to a uniform Duke 7 rootstock to further reduce the impact of non-genetic variability. Between the fall of 2001 and spring of 2003 half of the trees (two clonal replicates of each unique genotype) were planted out at UC Riverside and the other half at South Coast Research and Extension Center, Irvine.

In this experimental design, every tree genotype is represented twice at each of two locations. Any variation between the clonal replicates at the same location sheds light on how much of a trait is environmental and how much of it is genetic. Only the genetic component is useful for breeding purposes. The environmental component is the “noise” that misleads breeders and, regrettably, often has a large influence on agriculturally relevant traits.

Since 2003 the Clegg trees have been put to good use. First, a quantitative genetic study was initiated to address the mismatch between genotype and phenotype and, specifically, to determine whether certain vegetative growth characteristics are amenable to breeding. This work (Chen et al. 2007) revealed that about 30% of the total phenotypic variation in growth rate and flowering was genetic in origin and thus amenable to breeding.

While the initial value of the Clegg experimental population arose from its utility in teasing apart genetic and environmental effects on a phenotype, the trees soon acquired additional roles. Genetic markers offer the opportunity of placing phenotypic measurements in a molecular framework. Microsatellite markers were used to determine the pollen parent of each ‘Gwen' progeny tree, revealing that approximately three quarters of the genotypes had been pollinated in roughly equal proportions by ‘Bacon', ‘Fuerte', and ‘Zutano', with the remaining quarter sired by miscellaneous cultivars or rogue pollen sources. What better opportunity than to examine genetic variation of traits in the context of the pollen parent. An interesting finding from this line of study was that ‘Gwen' ´ ‘Fuerte' progeny had significantly wider canopies and shorter stature than their half-sibs sired by ‘Bacon' or ‘Zutano' (Fig. 2). The fact that tree width and height is amenable to breeding is an encouraging result in the context of high-density planting such as that commonly practiced in apple.

At a time when avocado was gaining cudos as a healthy fruit with excellent nutritional qualities and beneficial effects in the treatment of high cholesterol and cancer, the Clegg Collection was next harnessed in a study on fruit nutritional composition. Data was gathered on fruit nutrient content in each genotype. Again, taking advantage of the experimental setup, the environmental “noise” associated with each measurement was stripped away to extract the

genetic portion that proved to be appreciable (Calderón-Vázquez et al. 2013).

The next step was to connect this data with a new type of molecular marker. These markers—so called SNP markers (Single Nucleotide Polymorphisms)—were developed using gene sequences from a subset of the Clegg trees. They were designed to reside in genes known to control the accumulation of particular fruit nutrients. Statistical analyses revealed that beta-sitosterol contents were being tracked by one of the SNP markers: in other words, the presence of this marker in an individual was indicative of high beta-sitosterol levels in its fruit.

Markers that are highly predictive of desirable traits and are relatively easy to measure in young seedlings are the nuts-and-bolts of marker-assisted selection, a breeding method that draws on molecular tools. Consequently, a third project was initiated that harnessed the SNP marker that predicted high fruit beta-sitosterol contents. Progeny from trees of the Clegg population were screened using the marker. Out of an initial pool of over 600 seedlings 73 seedlings (12%) were identified that had the desirable form (allele) of the marker, and 12 seedlings (2%) were eventually planted out. The selection intensity of marker-assisted selection therefore is at least 10-fold higher than under traditional breeding.

A loss of the Clegg Collection would surely represent an opportunity lost. Many more projects could be envisaged that address the genetic determination of a trait, its association with SNP markers, the influence of the pollen donor, or the utility of a marker for marker-assisted selection. The Collection has also been the nucleus of a genetic mapping project. Significantly, the SNP markers developed for these trees are also relevant for studies beyond fruit nutrient content because their biosynthetic pathways intersect with those underlying plant stress and disease responses. This property makes the candidate genes equally relevant for studies on pathogen or salinity tolerance and a key resource that could help secure the future of avocado production in California during turbulent times.

The Clegg Collection: the trees shown here are growing at UC Riverside 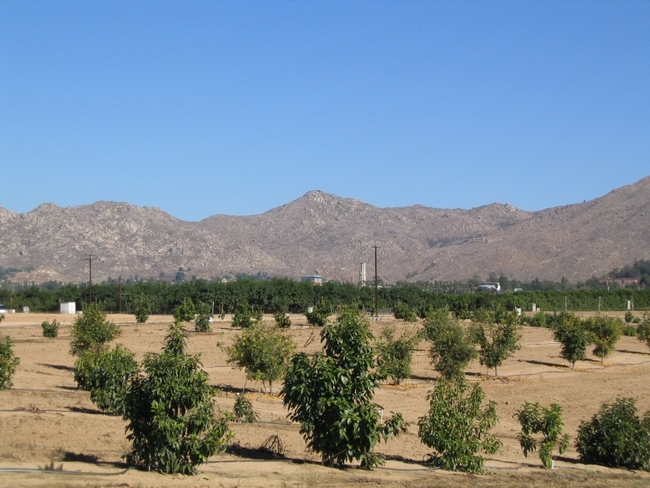