Strategizing for Water Cutbacks…Is there a Logical Method?
Published on: March 29, 2013

OK! Let's Strategize. There are four steps for everybody to consider, it doesn't matter if you have a backyard lawn and landscape or if you have 700 acres of avocados. 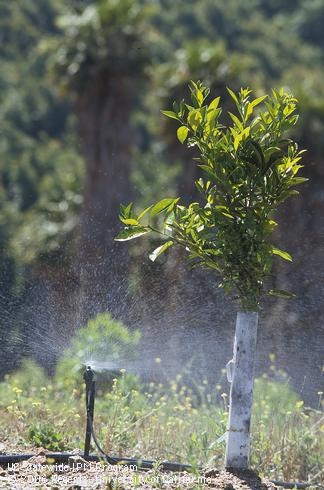 Deficit irrigation research by Dr.David Goldhamer has yielded some interesting results in navel oranges. In the original trial on mature, vigorous Frost Nucellar navels on a sandy loam soil, applied water was reduced by varying amounts and at different times during the irrigation season depending upon the treatment imposed. Regulated deficit irrigation is applying a fixed % less than the full water requirement of the tree during a specific period in the irrigation season.

The fully irrigated control trees received a volume of water estimated to be the tree water requirements based upon size and current weather conditions –using the current water requirements of a pasture grass (Eto cimis station) multiplied by a crop factor for mature citrus which is 0.65. The objective of the trial was to determine if the volume of applied water could be reduced by varying amounts and at different times during the irrigation season compared to a fully irrigated control without a loss in yield or quality and perhaps improved peel appearance. Measurements were made of fruit growth during the season and of yield and fruit quality at harvest; the amount of water applied with each treatment was measured as well. Research conducted over the years has indicated that citrus was sensitive to reduced irrigation particularly at petal fall and during early fruit development with loss in yield or fruit size. Ongoing research on Lane Late navels is being conducted with the object of reducing granulation by regulating fruit size for an optimum fruit size at harvest. Fruit held late for harvest frequently results in a significant portion of the fruit being large. Historically large fruit have a higher percentage of the fruit with granulation. This fruit may be less than optimum size (too large) for current market conditions as well. Based upon the previous regulated deficit irrigation study the object of the current trial is to regulate size based upon imposed stress by applying less than full irrigation during specific periods in the irrigation season that is early, mid and late season stress. Deficit irrigation generally at 50% of control.

Less water is applied than required by a fully irrigated tree for the period, and growth of the fruit is monitored compared to the fully irrigated tree. Adjustments are made in applied water based upon the growth of the fruit in the stress tree as well as measured tree water status (pressure chamber) compared to the fully irrigated control. The same type of response to the deficit irrigation that occurred with the Frost Nucellar has been observed. A slowing of growth under the deficit irrigation, then accelerated growth with resumption of full irrigation. However, this study imposes stress over longer periods that the previous study and thus, the desired reductions in fruit size at harvest have occurred in all but the T1 treatments. The first year of the study, when fruit loads were relatively high, showed that early season stress reduced granulation (6.5% for all sizes vs. 17% for the control) with no effect on size. Continuous stress reduced both granulation (mean of 3.8 for all sizes vs. 17% for the control) and fruit size. In the second study year with lower fruit loads, there was no reduction in fruit load but fruit size was reduced to a greater extent in the mid, late summer, and continuous stress treatments. This reduced the percentage of unwanted very large size (24 and 32 count) fruit such that revenue to the grower was higher by from $1300 to $3000 per acre, depending on whether 24s and 32s were considered marketable.

Deficit irrigation imposes a level of stress on the tree related to the amount of water that the tree is shorted compared to a fully irrigated tree. The tolerance of the tree to this stress is related to the vigor of the tree, the period in the fruit development cycle, weather conditions, and how long the stress continues, and the magnitude of the stress. Under the conditions of these studies the level of stress imposed is carefully monitored and the deficit irrigation treatments are under known conditions and are carefully controlled. Where conditions are not known by the grower the trees may already be under some stress, the vigor of the trees may not be high; the irrigation system may not be uniform and therefore not delivering the expected volume. Attempting deficit irrigation under these circumstances runs the risk of reducing yield perhaps seriously as well as fruit size.