The UC IPM Citrus Pest Management Guidelines has been updated to include new research out of the Rosenheim lab at UC Davis. Early-season pests like citrus thrips, earwigs, and katydids damage some types of mandarins differently. Learn how to adjust your management program accordingly. Many new photos have been added to these sections to improve pest identification and show more damage symptoms. It seems the humble earwig that can cause so much damage in citrus orchards in some years on some small trees can be a great boon in biocontrol.  Read on:

WSU scientists unmask the humble earwig as an apple-protecting predator

By Seth Truscott,College of Agricultural, Human, and Natural Resource Sciences

Helping Northwest apple growers protect their crops, WSU scientists have found new proof that earwigs are actually valuable predators in apple orchards, rather than the creepy, crawly, apple‑damaging pests they're sometimes assumed to be.

In the May 2019 edition of the journal Biological Control, Robert Orpet, recent doctoral graduate at Washington State University's Tree Fruit Research and Extension Center, details findings from his multi‑year effort to shed light on the European earwig and its role in combating a costly orchard pest.

“Earwigs will eat just about anything, but we've found that aphid pests are high on their menu,” Orpet said. “By dining on pests and reducing growers' need to spray insecticides, earwigs are unappreciated predators that have important benefits for agriculture.”

An invader in U.S. orchards and gardens, the European earwig was first found in Seattle in 1907, spreading across the continent soon after. With their wriggly bodies and scary‑looking tail pincers, earwigs have always suffered from a bad reputation.

“Apple pickers don't like them, because they have a tendency to hide in apple clusters,” Orpet said. “Farmers often find them inside damaged fruit, and since earwigs feed mostly at night, it's hard to see what they feed on. “Some growers wonder if they cause damage themselves.”

Scientists like Orpet, however, have long suspected that earwigs are an important predator of aphid pests.

Orpet came to the earwig through his research into the woolly apple aphid, a costly pest of Washington's $2.4 billion apple industry.

Gaining its name from their coat of cottony fibers, woolly apple aphids feed on the roots and branches of apple trees, stealing nutrients and water and causing galls, or abnormal growths. Infestations can decrease tree growth and keep fruit from developing, while the aphid's sticky honeydew secretions can bring on fungal infections.

About the size of a sesame seed, woolly apple aphids can amass in fluffy, meter‑long colonies.

Growers have difficulty managing woolly aphids with insecticides, because there are few effective insecticides, and no organic ones, currently available. Well‑known predators like ladybugs and lacewings could take a bite out of the woolly aphid population, but Orpet wanted to know if the earwig makes a difference.

Working with Jessica Goldberger, an agricultural sociologist at WSU's Department of Crop and Soil Sciences, Orpet interviewed 15 orchardists and managers in Washington state, gauging their opinions on the insect's role.

Most growers weren't sure whether earwigs make a real difference for their crops, and some thought of them as minor pests.

At the same time, Orpet was learning what earwigs are really up to in Washington orchards. Working with managers at four different commercial orchards, Orpet set about catching earwigs with cardboard traps.

Active at night, earwigs hide by day in tight spaces. Corrugated cardboard sheets are a perfect shelter, so he could easily shake them out and count them.

Sectioning off orchards, Orpet removed earwigs in some places, adding them at others. In every site, he counted woolly aphid colonies and checked for fruit damage.

“There was an obvious difference,” Orpet said. “There were fewer aphid colonies in places where I released earwigs.” He found no evidence that earwigs were causing damage themselves, but captured video footage of earwigs eating aphids and destroying their colonies.

Orpet also inspected the contents of trapped earwigs' digestive systems to see what they actually eat. He found that earwigs regularly dine on aphids, even when local aphid populations are small.

“Our results show that earwigs aren't pests, and actually improve biological control,” Orpet said. “Some farmers spray chemicals to knock down their populations, but this research shows they don't have to, and probably shouldn't.

“Growers can reduce pesticide use, save on chemicals and labor, and leave this misunderstood predator to do its beneficial work, protecting their apples from aphids,” he added.

Along with Orpet and Goldberger, co‑authors include WSU entomology professors David Crowder and Vince Jones.

Their research was funded by the Washington Tree Fruit Research Commission, USDA's National Institute of Food and Agriculture, and the Western Sustainable Agriculture Research and Education Program. 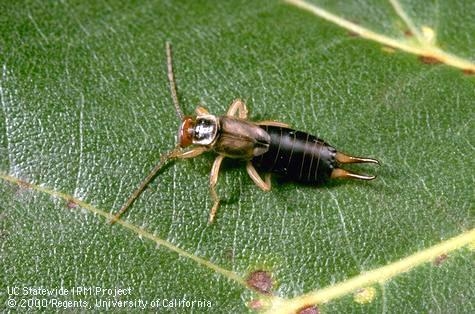