Burrowing rodents can cause extensive and expensive damage to orchards and crop fields. To manage the pests without chemicals used on conventional farms, organic growers can consult a new publication from UC Agriculture and Natural Resources scientists.

California ground squirrels, pocket gophers and meadow voles are the three most common species that cause damage. Squirrels chew on seedlings, fruit and nuts, killing young trees and reducing crop yields. In addition to plants, ground squirrels, pocket gophers and voles can chew on irrigation lines, and their burrow systems can channel water away from plants and erode the soil. The holes and mounds created by burrowing rodents pose hazards to farmworkers and farm machinery. This publication helps growers identify the rodent species on their properties, their life cycles and tools available to control them. “Growers can read about how to effectively select and set a range of traps for burrowing rodents,” said co-author Margaret Lloyd, UC Cooperative Extension small farms advisor for the Capitol Corridor. “Traps are an important tool for organic management, but maximizing control comes from integrating knowledge. Here we present information about rodent biology, trap efficacy, biocontrol, habitat management, plant protection and other approaches to collectively manage the pest problem.”

In the publication, Lloyd and Roger Baldwin, UC Cooperative Extension wildlife specialist in the UC Davis Department of Wildlife, Fish and Conservation Biology, review the effectiveness of commercially available traps – where to place the traps, whether to use attractants, and methods of euthanizing the animals. Traps are an important tool for rodent management on organic farms, but integrating traps with other tools are necessary for effective management, according to the authors. Photo by Roger Baldwin A choice of gopher traps

They also offer cultural techniques for deterring rodents such as flooding fields and deep ripping soil to destroy burrow systems. Crops for orchard floors or cover cropping can be selected and managed to minimize habitat that protects and encourages gophers and voles.

For biological control, they suggest barn owls, raptors and snakes might be able to assist, but warn growers that predators alone will not be able to eat enough of the rodents to reduce the high populations to tolerable levels for many growers.

“Effective management will rely on a suite of tools,” said Baldwin.

The 15-page publication is available for free download at https://anrcatalog.ucanr.edu/Details.aspx?itemNo=8688.

Squirrels eat a variety of fresh greens as well as seeds and dried nuts. In spring, ground squirrels prefer greens over seeds and nuts.  Once the natural grasses begin to dry and wither, squirrels will actively forage for seeds.

As foragers, squirrels are well-adapted to find sparsely dispersed food, one seed at a time. Once squirrels have had their fill, they will

collect food in their cheek pouches and take it back to the nest to form a cache for later use. Squirrels tend to forage close to their burrow, although they will travel for desirable foods.

How Biology relates to control:

The California ground squirrel prefers to forage for food in the early morning or late afternoon/early evening to avoid the day's heat. In some crop situations, especially nut crops, squirrels may prefer the crop to the point where they will not eat any bait. If the squirrel won't eat the bait, the poison bait method will not work. In this case, an alternative control approach may be necessary (trapping or fumigation).

Understanding these feeding preferences is extremely important when using baits since they are seed based. Also, in irrigated crops or landscape areas, squirrel feeding preferences are influenced by what food is available. For example, the natural vegetation may be dry in early summer and squirrels are actively foraging for seed. If newly sprouted crops are available however, the squirrels may take them with great delight.

The calendar of ground squirrel diet, activity and control measures is adapted from the Best Management Practices for California Ground Squirrel Control website at http://groups.ucanr.org/GSBMP/.  Calendar dates are merely an estimation of time; actual time frames may vary according to the weather.  The calendar may be laminated for use in planning and training for your operation. 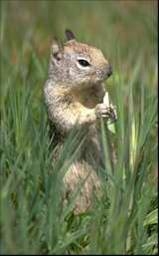 Vertebrate pests that have caused damage to citrus trees include rodents and small mammals, large mammals, and birds. Citrus orchards provide food and shelter for a number of these pests, and damage may be severe if the pest resides in the orchard. Damage can occur to the fruit such as rat chewing or bird droppings. Bark damage and tree death can occur from rodents and larger mammals. Damage to irrigation systems such as chewing on hoses can easily be the most expensive damage.

The goals of a successful management program include reducing the number of pest problems and using control methods that are affordable. There are four key points to establishing and maintaining a vertebrate pest management program. First, one must identify the specific damaging species. Second, review all the management control options. Third, one must take action quickly and early, and use the best option that is appropriate for the time of year and the orchard. Fourth, use a monitoring system to detect when re-infestation occurs and thus more controls are needed.

The first key point is identification and observation. Many of the agricultural commissioners’ offices in the counties can help with this problem. In addition, University of California Production Manuals such as almond and walnut have reference material on different pests. It is critical to identify the specific species or type of pest causing damage. You can use direct observations with some pests such as birds or squirrels that are active during the day. With pests that are active at night or tend to hide, one looks for tracks, burrows, or the type of feeding; or one can use traps. With rodents, one can use the size of the incisor marks on plants to help identify the pest. This is also useful on irrigation systems, where one can remove the damaged part and take it to an expert. Traps are also used where trails are established to capture and identify the pest. Pictures, especially close-ups are very useful and can be emailed or sent to experts on the Internet. If you also describe the adjacent habitat such as foothills, streams or rivers, etc., that information will help.

For some pests, there are many possible control options. It is very important to check with the agricultural commissioner’s office as animals vary by protected status and how the animal can be legally controlled. The pest’s life cycle will determine when and if a certain control method can be used. For example, ground squirrels can be controlled effectively with poisoned baits but not in early spring when the animal is feeding on green material. Gophers can be controlled all year with poisoned baits that are applied into the burrows, but are more active when the soil is moist. Habitat modification may be an economical option, as brush piles near an orchard will provide shelter for pests. Biological control such as attracting owls and hawks to an orchard can assist with control, but seldom keeps rodent levels below economic levels.

It is important to act quickly when a control measure is selected. Some vertebrate pests can increase in population quickly, and control is less expensive with lower numbers of pests. Some pests will reside in the orchard, and create a home there. It is much easier to control them when the pests live outside the orchard.

Finally, it is important to have a monitoring system in place after controlling a vertebrate pest so as to detect if the pest is re-entering the orchard. A good record system is important.

Many of the citrus orchards in the San Joaquin Valley (SJV) are located near the foothills on the eastern side. Some of the more common vertebrate pests include gophers, ground and tree squirrels, mice, rats, rabbit, coyote, feral (wild) hogs, and starlings. Rare tree damage has occurred from bear and beaver. There is more new acreage in the SJV planted in the middle of the valley. Those trees will be susceptible to the vertebrate pests already found nearby.

Rodents such as gophers and meadow mice (or voles) feed on plant roots, and can girdle and kill young citrus trees. Occasionally, gophers can kill mature trees, especially if the tree is weakened by other factors such as root rot. Many members of the rat family and deer mice will feed on citrus fruit. The effectiveness of control measures depends on identifying the specific rodent. The Eastern Fox Squirrel (EFS) is a tree squirrel found near big cities in the SJV and throughout the metropolitan areas of Southern California. It has moved to adjacent commercial citrus orchards and will feed on ripe fruit.

Coyotes, rabbits, and squirrels will damage irrigation hoses. By examining the damage, experts can identify the pest. The EFS has caused considerable damage to irrigation systems in some nut crop orchards in the Fresno area.

Larger mammals can be economic pests. Wild hogs will feed on fruit, damage bark, and create large holes or “wallows” on the orchard floor where it is moist. Occasionally, hogs will destroy irrigation hoses. Beavers have destroyed young citrus trees located near streams.

Bird problems have occurred mainly due to large flocks of starlings that nested in orchards at night. The damage resulted from the bird droppings on the fruit.

More information about vertebrate pests can be found here.